Ahed Tamimi was sentenced to eight months in prison for slapping a soldier. Col. Israel Shomer, who shot a Palestinian teenager in the back three times didn’t sit a single day behind bars. 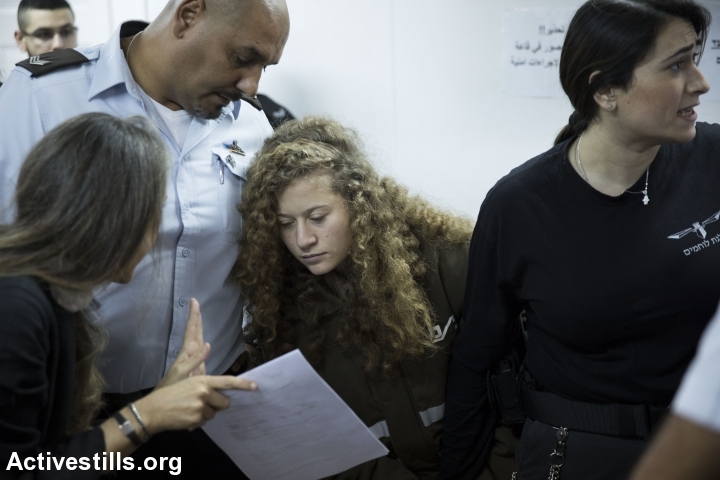 Israeli lawyer Gaby Lasky (L) speaks with her client, sixteen-years-old Ahed Tamimi (R), before she stands for a hearing at the military court in Ofer military prison, near the West Bank city of Ramallah, January 15, 2018. (Oren Ziv/Activestills.org)

Ever since she was arrested in the middle of the night late last December, 17-year-old Ahed Tamimi has been held in Israeli custody. On Wednesday, Tamimi signed a plea deal in Israeli military court and will serve eight months in prison, including three months time served. Her mother, Nariman, and cousin, Nur, also signed plea deals. Nariman will serve eight months, and Nur was sentenced to time served.

Israel’s military legal system uses the tactic of plea bargains often. Approximately 70 percent of convictions for minors in military court end in plea bargains, pushing the percentage of total minors convicted in military courts to an astounding 95 percent. For Palestinian teenagers it is obvious that if they sign a plea bargain, there is a high chance that they will go home to their families and friends faster than if they insist on going to court — even if they have a chance of winning. Often the proceedings might even take much longer than the sentence they would be handed in a plea bargain.

In the case of the Tamimi family, one could assume that it was clear to them that what began as a “show trial” would eventually end in prison time. Thus the path to a plea bargain was paved. The military court’s insistence on holding Ahed’s trial behind closed doors, such that it would be hidden from public view, did not give the family any more reason to trust in whatever justice the occupier could offer.

Ahed’s eight-month sentence comes at a curious moment. All it takes is for a Palestinian teenager to humiliate an Israeli soldier in order for the entire system to be enlisted to ensure that she and her family go to jail. And yet, it is unheard of for a soldier to be put on trial for shoving or cursing a Palestinian.

So let’s take the comparison further — to killing. 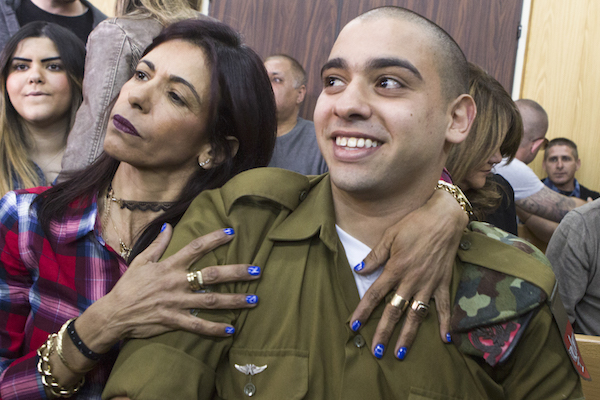 Just this week, the IDF Parole Board decided to cut Elor Azaria’s sentence by a third, after it had already been previously commuted by the IDF chief of staff. By the time he is released, he will have served a total of nine months behind bars. Azaria did not slap anyone, but he did shoot and kill Abedel Fattah Sharif, a Palestinian who was shot and wounded on the ground, posing no threat to anyone, after attacking soldiers with a knife just minutes earlier in Hebron’s Tel Rumeida neighborhood. Had a B’Tselem volunteer not been at the scene to capture the incident on film, Azaria would have been lauded as a hero who “neutralized a terrorist.”

Or what about the case of Amir Awad, a Palestinian teenager who was shot in the back by two IDF soldiers during a protest in the West Bank village of Budrus in 2013? The soldiers fired eight bullets into Awad’s back, killing the 16-year-old boy as he was trying to flee. Two soldiers were put on trial for reckless and negligent use of a firearm, following a faulty investigation, yet their attorneys did not agree to a plea bargain of three months community service. During a hearing held last week, the attorneys presented military data to the court showing that in the last seven years, out of 114 cases in which soldiers had shot and killed Palestinians, only four indictments were filed. Now the prosecution is considering withdrawing their indictments altogether. 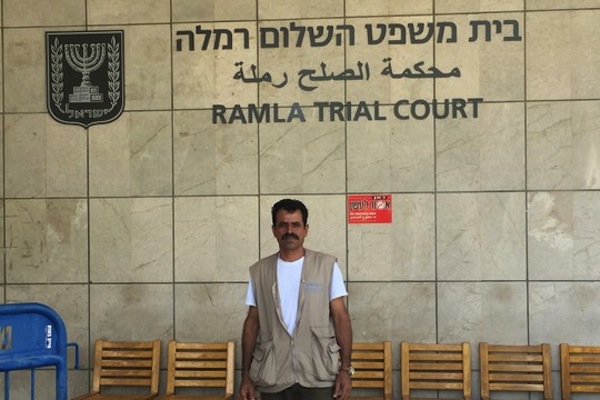 As if that was not enough, there is the case of Col. Israel Shomer. In July 2015, Shomer, who at the time served as a brigade commander in the West Bank, shot and killed 17-year-old Muhammad al-Kasba. The teenager threw stones at Shomer’s armored military jeep, after which the officer stepped out of the car and began chasing him, along with another soldier. At a certain point, Shomer opened fire. Two bullets hit the teenager in his back and another one in his head. Shomer was not in any danger; perhaps he just wanted to teach the boy a lesson. A year after the incident, the military prosecution closed the case and decided that Shomer would not be put on trial.

The women of the Tamimi family, who dared to resist occupying soldiers in their yard by fists and words alone, will sit in jail for longer than Shomer, longer than the soldiers who killed Samir Awad, and only a slighty less than Elor Azaria. That’s what justice looks like under the occupation’s legal regime.