Despite recent improvement in the economic situation of Palestinian citizens of Israel, many remain suspicious of the Israeli government and its motives. Palestinians must look back at the legacy of the black American struggle for equality, drawing on lessons that they can use to further their own cause. 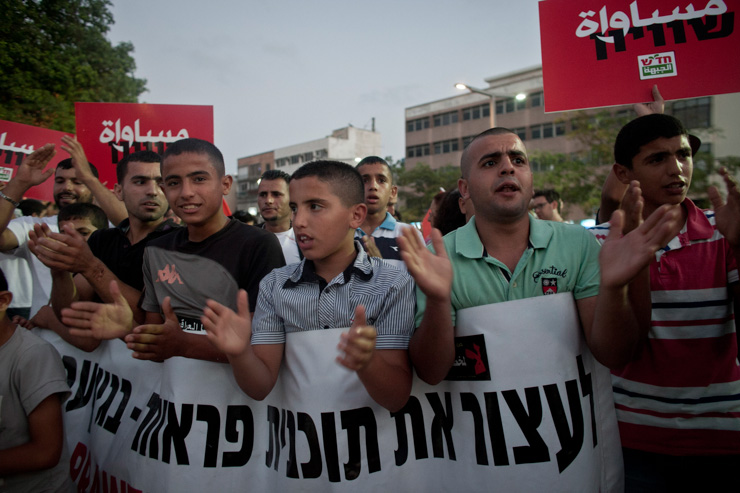 Bedouins who live in the Negev desert and local activists demonstrate in center Tel Aviv against the Prawer-Begin plan, August 31, 2013. According to the plan, which the government failed to consult the Bedouin community on when drafting, nearly all residents in the unrecognized Negev villages will be evicted and forcibly relocated to planned communities. (photo: Oren Ziv/Activestills.org)

Thanks to Israeli government efforts, there has been a substantial improvement in the economic wellbeing of its Palestinian citizens. Whereas in the period 1997-2005, after adjusting for inflation, Palestinian family income declined, during the next six years it rose by more than 7 percent. By contrast, Jewish family income increased by more during the earlier than the most recent period.  The following essay will identify five ways in which the Palestinian community can learn from the economic advancements made by black Americans in recent decades.

1. Can economic advancements be a catalyst for social and political improvements?

After the initial civil rights gains, many U.S. whites maintained negative attitudes toward black Americans. In Israel, strong anti-Palestinian attitudes remain so that Palestinians doubt that many of the current government initiatives can be sustained.  I am more hopeful, however, because I believe, just as it happened in the U.S., a growing professional class will push successfully for social and political changes.

2. Is a moral commitment to equality necessary to sustain government efforts when a significant share of the majority population is not supportive of equality?

In the U.S., efforts were sustained because many government officials were driven by a strong moral commitment towards equality. While there are notable exceptions like Manuel Trajtenberg (who led the 2011 negotiations between the government and the social protest leaders), the Israeli government is driven by economic concerns. With a growing Palestinian population, they reason that Israel can no longer leave such a large segment of its population behind if it is to maintain its global competitiveness. Some anti-Palestinian officials are particularly committed to raising the employment levels of Arab women. They are not driven by a moral commitment to gender equality but a belief it will reduce welfare costs and Palestinian birth rates. Even the hi-tech industrialists who are funding important educational and employment initiatives are motivated by economic, not moral considerations.

For many observers these pragmatic motives are disquieting. How can we applaud efforts and expect them to be sustained, when they lack a moral foundation? How can we expect these economic initiatives to be a springboard for broader changes when many officials are indifferent if not hostile to full equality?

In the U.S., because these moral concerns were not coupled with economic considerations, the business community was not an active participant in equality efforts. When manufacturers found it more profitable to relocate from their central city production sites, they left behind black youth to languish in central cities that became breeding grounds for illegal activities that landed millions in the criminal justice system. Thus, economic motives can be important, and even necessary, to sustain broader equality efforts.

3. Do critics dwell too much on abuses from the not-too-distant past?

In Israel, many Palestinians keep alive the memory of past abuses that shape current attitudes towards working with government agencies on local initiatives and enlisting in national service. Palestinian citizens would benefit from understanding how references in the U.S. to past abuses have been helpful in stemming new abuses like voter ID requirements. However, this could also limit support for helpful policies like vocational and apprenticeship programs.

4. Do government actions that trample basic human rights trump all other positive achievements?

In the U.S., the criminalizing of so many young black Americans is a severe blemish on its democratic ideals. Countless numbers of black men and women have been imprisoned while stop-and-frisk policies in New York City (and the Trayvon Martin murder in Florida) highlight ongoing harsh policing policies. For some Americans, no matter how much the black professional class is increasing nor how many black politicians are elected, the U.S. will remain a fundamentally racist country as long as these policing abuses continue.

For many, the Israeli parallel is the government’s treatment of the Bedouin community. Given past practices and the threat to uproot tens of thousands of Bedouin from the Negev, many Palestinians consider Israel a racist country (despite the economic advances within their communities). Just as in the U.S., emphasizing only group victimization can become demoralizing and weaken the ability of individuals to make educational and career choices that enable them to move forward.

5. Is it possible to maintain group solidarity once significant class cleavages appear?

As the black professional class escaped the poor government services and harsh police tactics that typified their old neighborhoods, they no longer had the strong personal ties that would help them maintain unity with less fortunate black Americans.  These professionals were also less inclined to support confrontational behavior of a militant black leadership.

There are now the beginnings of such a transition in Israel. More Palestinian professionals are moving to integrated Israeli cities. Will their movement away from Arab villages create cleavages? Certainly, I expect that the Palestinian professional class will increasingly reject the confrontational behavior of the nationalist Arab parties and instead foster more constructive engagement. Will Balad become the party of the dispossessed just as Al Sharpton became the leader of black communities that were left behind? Only time will tell. But if the American experience is a guide, this cleavage will make it more difficult for the Palestinian community to maintain political unity.

Robert Cherry is Professor of Economics at Brooklyn College and author of the forthcoming article, “Increased Constructive Engagement among Israeli Arabs: The Impact of Government Economic Initiatives,” Israel Studies (Jan 2014).