They began with clashes around the Temple Mount/Haram al-Sharif, continued with mutual arson and stabbing attacks, and ended in a massacre. And even then we continued living together.

By Hillel Cohen (translated from Hebrew by Sol Salbe) 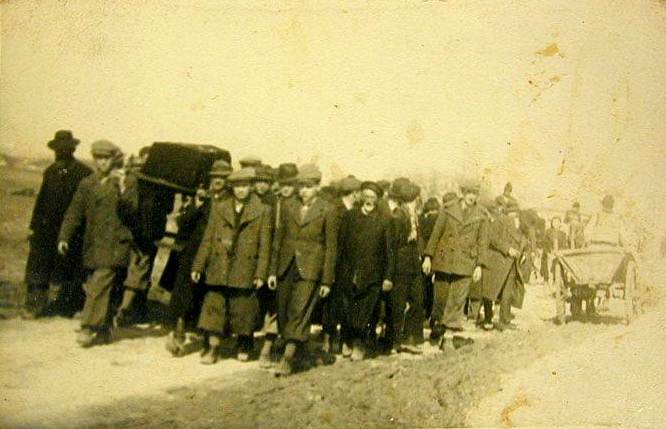 The recent events in Jerusalem are reminding some people of the summer of 1929. The parallels are uncanny: a struggle to extend praying rights for Jews at the Temple Mount; rising tensions; hateful language; a meager few voices trying to restore calm only to be denounced as traitors; blood in the streets. And more blood. And more.

Among the killings there is a phenomenon that may be petering out and disappearing: the occasional Arabs saving Jews, and vice versa.

It makes me think of Rabbi Abraham Isaac Kook, known in Hebrew as HaRav Avraham Yitzchak HaCohen Kook. In 1929, during the terrible massacres in Hebron and Safed, while people were being lynched in Jerusalem and murdered all over the country, Kook was the chief rabbi of Mandatory British Palestine.

Kook is considered to be the ideological father of the religious-Zionist current in the most meaningful sense of the word. He developed the concept whereby Zionism, despite its secular external trappings, is actually steeped with sacrosanctity. Kook’s sobriquet of “HaRaAYaH” is based on the acronym of his long name (excluding his surname) but it takes advantage of the portmanteau word that it makes (“sight”) to hint at his profound ability to observe. There are a few other allusions to his unusually perceptive viewpoint, expressed in the title of his guide to the Talmud.

Contrary to the image that has become associated with his teachings among a substantial segment of the religious-Zionist community, the rabbi’s worldview was anchored in a universalist approach. He contended that the Jewish people were sacred because sanctity is embedded deep down within every human being. The role of the Jewish people, in his view, is to raise humanity to a higher level by raising itself higher and taking the rest of humanity with it.

Kook took a similar attitude to the Land of Israel and the Temple Mount as its heart. It is the epicenter of the universe where the glory of God is revealed.

But the rabbi’s greatest strength — the lucid vision of his mysticism that encompassed both the sanctity of the Jewish people and that of the Temple’s location — was also his great blind spot. Two days before the massacre in Hebron, a day before the acts of lynching and attacks in Jerusalem, the British turned to the leaders of the Arab and Jewish communities in Palestine, asking them to call on their respective communities to exercise restraint and refrain from further inflaming the situation. The Arab leadership took upon itself to do so, even if perhaps only perfunctorily. Rabbi Kook, however, responded to the British appeal in the negative. 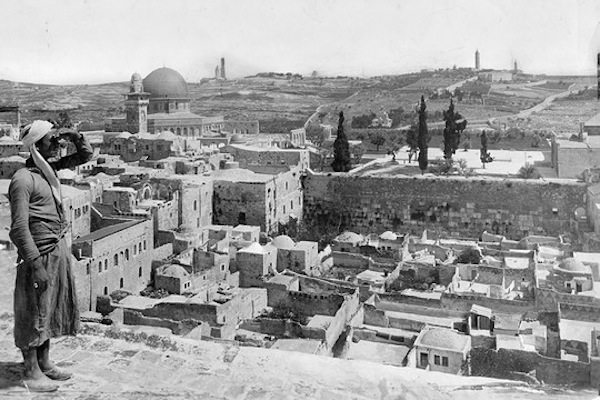 According to a report in the following day’s Haaretz (Friday, August 23 — the day the riots broke out) the rabbi said he could see no point in it, “because it is not the Jews’ intention to launch an attack on anyone.” His Ahavat Yisrael [love of the Jewish people] distorted his perception to the point that he simply missed the violence that was taking place all around him. Thus he saw the “march of the flags” on Tisha B’Av (a Jewish day of mourning marking the destruction of the Jewish temples) as the “the eruption of the sanctity of the supreme soul of the Jewish people,” ignoring the provocative aspects that accompanied it.

He also paid no attention to the harshly violent atmosphere that prevailed during that week in Jerusalem. For there were quite a few incidents: during a fracas involving knives in the Bukharan Quarter, a Jewish youth had been killed, a young Arab was seriously wounded and another twenty people — both Jews and Arabs — were also injured. Jewish residents of the ultra-Orthodox neighborhood Mea Shearim and the Bukharan Quarter torched the homes of their Arab neighbors. It was only through a sheer miracle, and with the help of some other Jewish neighbors, that one Arab family escaped alive. Jews were also attacked on their way to Mount Scopus, while Arabs were set upon while passing through Jewish neighborhoods.

There were many more incidents. But the rabbi only saw the inner sanctity at the heart of the Jewish soul, repeatedly stressing the demand for extended Jewish praying rights at the Western Wall. In the midst of those tense days he proposed in an interview with the Doar Hayom daily to evict (with compensation) the Muslim residents of the Mughrabi Quarter in front of the Western Wall, in order to facilitate the creation of more amenable facilities for Jews to pray in.

Three months after the horrid massacres, Kook sounded quite contrite, his words indicating remorse. “I am sorry that the question of the Wall was exaggerated to that extent. The question of ownership is not a matter of negotiations; it should be decided by the One Above … If not for the irresponsible Arab leaders after World War I, the question wouldn’t have even arisen. By the same token we should not turn tables, chairs and a partition into a major religious matter. The main thing is to maintain the principle of the sanctity of the Western Wall for us and to allow us to pray next to it…”

The writer SY Agnon, who was close to Rabbi Kook, was not one of those who inflamed the situation, although he certainly did not try to calm things down. After the riots erupted, Agnon felt he had made a terrible mistake in not trying to douse down the nationalistic mood. “When I attended the Va’ad Leumi (Jewish National Council) plenum for the first and last time in my life,” he wrote to prominent Reform Rabbi Judah Leon Magnes, “and I observed the heroism disease of all the heroic speakers, I wanted to yell out: lay your hands off it. But by nature I am the reticent type and every day I regret not rising up to oppose it.”

Agnon’s grief is very understandable, as is his difficulty in raising his voice in real time. One also needs to consider that it is not always possible to identify an outbreak of violence before it occurs. Sometimes the situation simmers all the way to the brink of the boiling point before dissipating. But that doesn’t always happen by itself. There are those finely-balanced, critical times, in which all it takes is for one additional inflammatory voice to bring the situation to the boil, drawing out the lethal instinct in more and more people. The people being aroused are convinced that they are acting in self defense or to defend their national honor. On the other side of the coin, moderate voices can quell the situation, preferably by offering substantive changes rather than arguing divisively, and remind people of their humanity and the humanity of their enemies. This is exactly the stage when wisdom and moderation can hold back a sea of bloodshed.

The balance of power between Jews and Arabs in 2015 Jerusalem is very different than what it was in 1929. But now, as then, the two communities have metaphorically blockaded themselves in their own corners — each convinced of its faith, the justice of its own case, its sense of victimhood, and its own absolute truth. Among those in either community who hold God in their hearts, there is the additional factor of their yearning to get closer to God and everything that is sacred. With a few individual exceptions, both communities find it difficult to see the humanity of the other side.

Both of these communities ask, “How can you call human those who distribute sweets following the murder of children?” or alternatively, “How can you call human a society in which everyone unanimously supports the killing of children in Gaza?” The two communities grumble: how does anyone dare compare us to one another, for we are so much in the right and they are such despicable villains, with each offering ample evidence to prove that they are right. 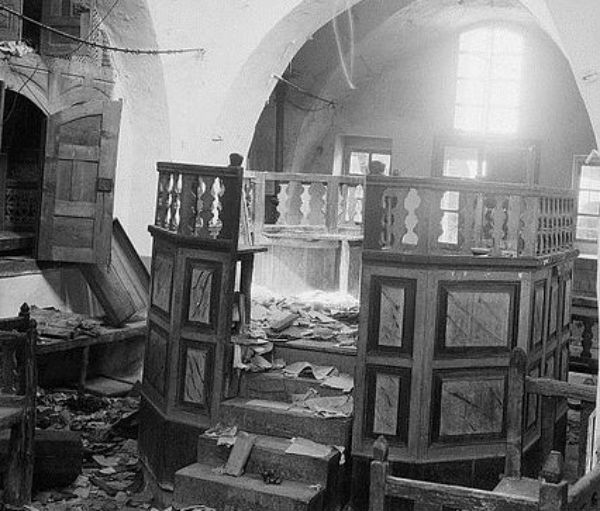 A synagogue desecrated in Hebron during the 1929 riots in the city.

At the very same time, most members of both communities are well aware that they are destined to live side by side for many years to come. They know that they will continue sharing the light rail carriages, the supermarkets, city parks, maternity wards, the markets and the Magistrates Court halls. They know that life in Jerusalem combines the mundane and sacred, vision and reality, Jews and Arabs. And somewhere deep inside, I think, many feel that even if there will be the most violent of outbreaks, everyone will come back — battered and bruised — to those same streets. Only the scars borne by them will be deeper.

But this knowledge in itself is not enough for one to rein oneself at a time when the blood is boiling. It is your duty to hit out at the enemy, says the politician. By blood and fire Judea/Palestine will rise again,” says the poet. “Let me die with the Philistines”, says the adrenaline. “This is our land and our land only” replies the patriot. “We want action,” says the youth. “And the stranger who approaches shall die,” preaches the preacher. “I have no other way,” says the desperate one. And he’s right. If no other path is found to a substantial change in the distribution of power, of mutual acceptance of the principle of equality, we will continue to go from cycles of violence to licking our wounds.

Hillel Cohen is the author of 1929: Year Zero of the Jewish-Arab Conflict, and teaches Palestinian and Jewish history at the Hebrew University. He is based in Jerusalem. Translated by Sol Salbe of the Middle East News Service, Melbourne, Australia. This article was first published in Hebrew on Local Call. Read it here.