Netanyahu has more paths to the Prime Minister’s Office than Herzog, but also more party leaders who oppose him personally.

Netanyahu’s Likud party held its primaries last Wednesday. Likud members chose an uninspiring team that didn’t include new stars, but also didn’t damage the party’s brand and might have increased its appeal in the political center. Two of Likud’s most extreme politicians, Tzipi Hotovely and Moshe Feiglin – were considerably demoted, and will probably not make it to the next Knesset.

These elections are mostly about Netanyahu anyway, more than any other issue or person. With that in mind, Bibi came out slightly stronger from last week, following the failure of his opponents in the Likud primaries and his success in blocking the Palestinian move at the UN Netanyahu’s appeal to the public has to do with an ability to hold on to the status quo at a relatively low cost. A successful Palestinian bid would have angered Israelis but also demonstrated the dead-end Netanyahu’s strategy has reached, thus increasing the appeal of challengers from right and left alike. Given the Palestinian failure, Israelis can go on ignoring the the issue altogether. That is good news for Bibi.

At the same time, Netanyahu is entering this campaign in a relatively weak position, and no poll I’ve seen gives him the absolute majority that would secure his fourth term as prime minister. Instead, we are facing a more complex picture, in which a lot will depend on the political maneuvering taking place after the polls close. The bottom line is this: Netanyahu has more paths to a coalition of 61 MKs than Labor’s Isaac Herzog, but not a lot more. However, even if Herzog does manage to form a government, it won’t be a lefty one (like the Rabin government in 1992) but rather a centrist coalition, more closely resembling the one led by Ehud Olmert. 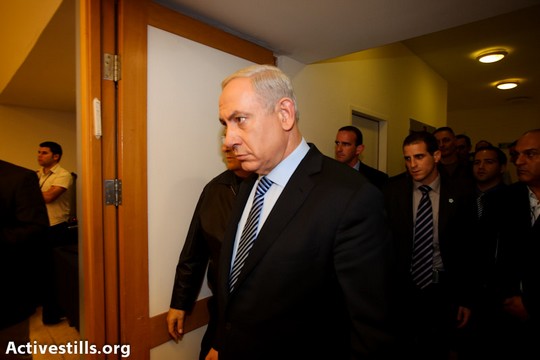 Netanyahu. Will depend on Liberman and the Orthodox parties (Yotam Ronen / Activestills)

After the election, President Rivlin will need to give the opportunity to form a government to the Knesset member with the best chances of succeeding (and not, as some people think, the head of the biggest party). In order to determine the identity of this person, Rivlin will consult with members of all parties, who will recommend a certain candidate (much of the horse-trading takes place during the recommendation process). Once Rivlin makes his choice, the MK he nominates will be given 45 days to form a government.

[Note that Eli Yishai’s 3 seats won’t get him past the Knesset threshold, but I included him here because this number reflects some polls in which he scores 4-5 seats, and some in which he fails to enter the Knesset and gets none. A lot will depend on the fate of his party.]

When figuring out who is more likely to receive the first opportunity to form a coalition, it’s useful to think of blocs of parties. We have 41 Knesset members who will almost certainly recommend on Herzog (Labor, Meretz and the Palestinian parties); and 39 MKs who will certainly go for Netanyahu (Likud and Jewish Home).

We can also add Lapid to Herzog’s side – the former made clear that he won’t again sit in a Netanyahu government. United Torah Judaism and Eli Yishai are more likely to go to Bibi. Now the blocs split 50:49 in Herzog’s favor.

Three parties remain in the middle – Kahlon, Shas and Leiberman. They are the likely kingmakers. It’s enough for two of them to join one side, Bibi or Herzog, for this bloc to go over 61 and receive the first opportunity to form a government.

Netanyahu has a better chance of securing those votes. Kahlon and Leiberman, both of them former Likud members, have personal issues with Bibi, but their politics are closer to the Right. It’s not really clear with either of them whether they are trying to increase their bargaining chips with attacks on Bibi, or if they really made up their minds not to support him again. I guess the more the numbers end up in Bibi’s favor, the more solvable their problems with him will seem.

For Herzog, things might be very tricky: Shas will have a problem sitting in the same government with Lapid, though a solution might be found on this front. And Meretz might have a problem with Liberman (and vice verse). Another complication is that a coalition with Liberman might not receive the support of the Palestinian parties – not even from the outside. In other words, the center-left bloc is not really a bloc, and Herzog will need to negotiate a complex puzzle, while Bibi’s work will be much simpler.

Tzipi Livni and Isaac Herzog announce a joint slate for the upcoming elections, December 10, 2014. The center-left bloc is more fragmented and less ideologically consistent than the right (Photo by Activestills.org)

A slight shift in the map to the right or to the left might change everything. If for example, the Left plus Lapid and Kahlon get to 61 seats (they have 59 now), they take the veto power from Liberman and the ultra-Orthodox. In such a case, Herzog will almost certainly become prime minister, in rotation with either Livni or Kahlon. Bibi has reason to be concerned: there is a slight trend of voters moving from the Right to the center and from the center to the Left. Alternatively, a strong performance by Yishai and the collapse of Shas would bring Bibi his victory.

There are also wilder scenarios: The leader of a centrist party – Kahlon? – might demand to become prime minister himself, either alone or in rotation, if he is convinced that it’s impossible to form a government without him. This is probably what Liberman had in mind when he decided to support heading to new elections, but if the election results are similar to the current polls, Liberman won’t have much to negotiate with. Here is something else to look at: A swing of four seats from Likud to the Jewish Home can make Bennett the leader of the bigger party on the Right. If the Right forms the next government, he could demand to share the prime minister office with Bibi, or in case Netanyahu resigns after the elections, with the person replacing him.

Finally, the complexities I’ve outlined here will make it very difficult to form a stable government — especially if it’s not a right-wing one (because the center-left bloc is not as ideologically coherent as the Right). This means that the ability of the next prime minister to engage in major reforms will be very limited to begin with, regardless of his agenda.