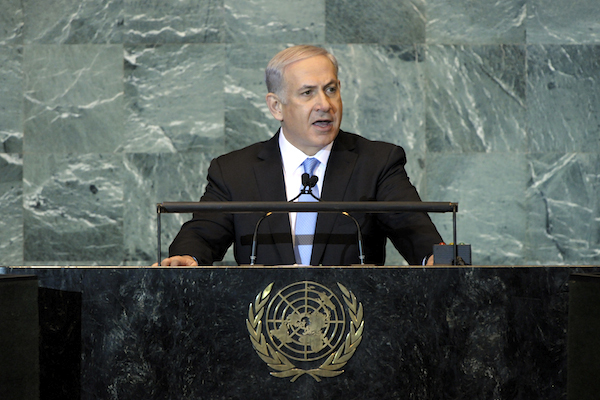 What should you expect Israeli Prime Minister Benjamin Netanyahu to say in his speech to the UN on Monday?

Seven words: Hamas is ISIS and ISIS is Hamas.

Okay, he’ll probably say a few more things than that: Iran. (It will be interesting if Netanyahu accidentally completes his logic game and concludes that if ISIS = Hamas, and Iran = Hamas, then it must hold that ISIS = Iran. Spoiler alert, Netanyahu told The Jerusalem Post last week that, “The biggest threat without question is the marriage of militant Islam with nuclear weapons, which means Iran.”)

Let’s take a look back at the past three speeches Netanyahu has given at the annual UNGA General Debate.

In 2011, the prime minister took a stab at animal allegory in an attempt to show the world just how silly its demands on Israel are, and of course to impress upon us that militant Islam is no joking matter (although he provided plenty of fodder for comedians and single-issue Twitter accounts):

[C]ritics continue to press Israel to make far-reaching concessions without first assuring Israel’s security. They praise those who unwittingly feed the insatiable crocodile of militant Islam as bold statesmen. They cast as enemies of peace those of us who insist that we must first erect a sturdy barrier to keep the crocodile out, or at the very least jam an iron bar between its gaping jaws.

In 2012, Benjamin Netanyahu went medieval on all of us to drive home just how bad these primitive forces of radical Islam really are, and that Israel is the polar opposite. (2012 was also the year of the classic ACME bomb cartoon):

[T]oday, a great battle is being waged between the modern and the medieval. The forces of modernity seek a bright future in which the rights of all are protected, in which an ever-expanding digital library is available in the palm of every child, in which every life is sacred.

The forces of medievalism seek a world in which women and minorities are subjugated, in which knowledge is suppressed, in which not life but death is glorified. These forces clash around the globe, but nowhere more starkly than in the Middle East. Israel stands proudly with the forces of modernity.

In 2013, the Israeli prime minister took it old school and brought back the animal characters we got to love two years earlier. The new radical Islamic president of the Radical Islamic Republic of Iran, you’ll remember, smiled much more than his predecessor and Netanyahu was terrified that the world would be charmed by his unnaturally pointy pearly whites:

[T]he only difference between them is this: Ahmadinejad was a wolf in wolf’s clothing. Rohani is a wolf in sheep’s clothing, a wolf who thinks he can pull the eyes — the wool over the eyes of the international community.

So, what will Netanyahu give us this year? Will he use props? Will we be introduced to fun new animal characters? Will we learn more about nuclear physics through cartoonish infographics?

Or perhaps the answer lies right under our eyes. Upon boarding his plane to New York Sunday morning, Netanyahu told reporters: “In my address to the UN General Assembly, I will refute all of the lies being directed at us and I will tell the truth about our state and about the heroic soldiers of the IDF, the most moral army in the world.”

Just don’t forget, he’s been doing this for a while. 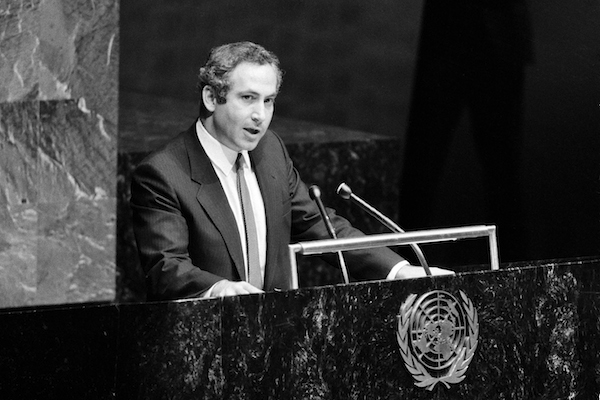 Then Israeli Ambassador to the UN Benjamin Netanyahu addresses the GA during a “debate on the situation in the Middle East.” (Photo by UN/Saw Lwin)