Whatever disruptions are afoot in the balance of international power will eventually be reflected at the United Nations. And when that happens, even a staunch supporter of Israel like Nikki Haley may have to yield to a new order. 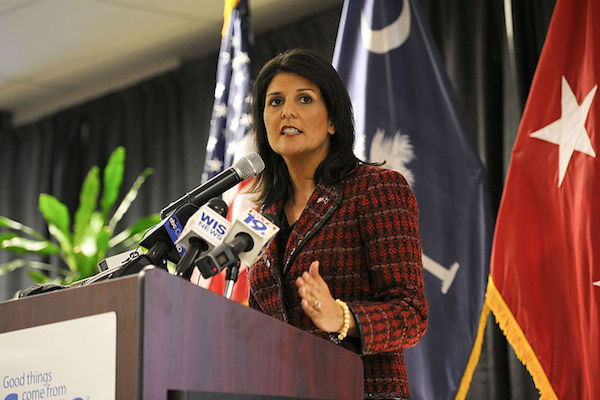 When she signed into law the first state legislation penalizing companies that boycott “based on race, color, religion, gender or national origin,” South Carolina Governor Nikki Haley was lauded by the bill’s author, State Representative Alan Clemmons, who made clear its intent.

Citing “tactics employed by the Nazis,” Clemmons called the Palestinian Boycott, Divestment, and Sanctions movement a prime example of “hatred and bigotry” for “its effort to harm our great ally, Israel.”

Haley’s stance on the issue may be the closest thing to foreign policy experience this newly named U.S. ambassador to the United Nations can claim. But as news of her selection made the media rounds, most reports zeroed in on her history of public spats with the incoming U.S. president, who announced Haley’s selection today.

Several outlets recalled a March tweet in which Trump scolded the governor for publicly disavowing his views, including on immigration. “The people of South Carolina are embarrassed by Nikki Haley!” Trump wrote.

And The Jerusalem Post reminded readers that Haley, who signed a 2015 bill removing the Confederate flag from her state’s capitol building, excoriated the then-candidate for “not speaking out more forcefully against white supremacists,” according to the paper.

In the lead up to the Confederate flag legislation, Haley guided her state through the aftermath of a mass shooting by a self-professed white supremacist, who killed nine people at a predominantly African-American church in Charleston.

That experience, combined with her Indian roots — her parents are both immigrants from the subcontinent — presumably pit the incoming ambassador against some of Trump’s most ardent supporters, including attendees at a so-called “alt-right” gathering in Washington, DC last Saturday. At the event, avowed white supremacist Richard Spencer evoked Third Reich terminology in celebrating Trump’s victory, prompting his audience to cheer him on with Nazi salutes.

How a child of South Asian immigrants, whose signature act as Governor was to counter the BDS movement — on grounds that it resembled “Nazi” tactics — will fare in a Trump administration remains to be seen. But if Trump’s other appointments to date are any indication, Haley’s views on Israel are what will matter most in her new position.

When she offered the Republican response to Obama’s last State of the Union address in January, Haley vowed that her party, if it held the White House, “would make international agreements that were celebrated in Israel and protested in Iran, not the other way around.”

Now that Trump has seized the presidency, we can expect America’s new UN ambassador to make good on that promise starting in January, upholding a longstanding U.S. tradition of unqualified support for Israel in the international body. That she will be doing so with card-carrying white nationalists in her court is further evidence that America’s support for Israel has never been about upholding democratic values or combating bigotry.

As that dissonance grows even louder in the age of Trump, it will likely only hasten the erosion of America’s credibility at the United Nations. So too with America’s influence — an outcome that will no doubt sway key debates, including on Syria and Iran, in others’ favor.

The question is whether those others, chief among them Russia and China, will then turn their sights toward forcing a just resolution to the Palestinian question. It was, after all, Chinese President Xi Jinping who earlier this year called for a Palestinian capital in East Jerusalem — this during a regional visit that included a stopover in Iran and a Chinese trade deal with that country to the tune of $600 billion.

It’s hard to imagine Trump or his current advisors thinking that far ahead, but one thing seems certain: whatever disruptions are afoot in the balance of international power will eventually be reflected at the United Nations. And when that happens, even a staunch supporter of Israel like Nikki Haley may have to yield to a new order, one that heeds B’Tselem’s Hagai El-Ad and his call to the UN Security Council last month:

“The rights of Palestinians must be realized; the occupation must end; the UN Security Council must act; and the time is now.”