In June 2010, the AIX Group published a series of noteworthy position papers on the two-state solution. At a time when restrictions on access between the Gaza Strip and the West Bank are becoming ever more entrenched, AIX researchers made an attempt to look into the future to see how access might be realized. The result: a long position paper (PDF) which details a number of possibilities for a safe passage between Gaza and the West Bank that thoroughly addresses security, environmental and statutory considerations.

Dr. Ron Pundak, one of the architects of the Oslo Accords and a member of the AIX Steering Committee, told Gisha: “In the Oslo Accords, Israel recognized that the West Bank and the Gaza Strip are a single territorial unit, and therefore there must be a link between them.” Dr. Pundak said that “the minute Palestinians have to travel through Israel to get from Gaza to the West Bank, you have a system that makes things difficult for all parties. There are security problems, and trade becomes more restricted and less competitive. This is why we preferred to plan a closed route that would be designated exclusively for Palestinian use and would be under Palestinian responsibility.”

The absence of a “safe passage” is by no means the only reason for the restrictions on travel between Gaza and the West Bank – Israel forbids passage even when Palestinians seek to access the West Bank from Gaza via Jordan, without entering Israel at all. A “safe passage” could facilitate travel.

AIX brings together senior researchers, individuals who have participated in negotiations and people experienced in Israel and the Palestinian Authority’s economic institutions with the aim of analyzing the economic aspects of a permanent agreement between Israel and the Palestinians. The cost of the territorial link between Gaza and the West Bank has also been considered. AIX estimates that the project would cost about $700 million, in addition to $180 million for security arrangements.

Of a number of alternatives examined, AIX recommended Route 33 – to create a new overland road and railway between the Karni crossing and the Al-Majid crossing: “The construction of a tunnel or a bridge is not feasible, and the use of a monorail or a train alone will not satisfy the core interests of the Palestinians,” the position paper states.

What happens when this route intersects with Israeli roads?

“There is an appropriate engineering solution for every location. We can build a bypass, tunnel or any other solution allowing for travel. We tried to find a route for the link that minimizes friction as much as possible.” 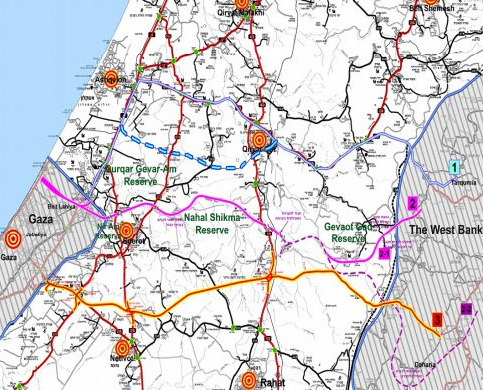 A map of the routes that AIX considered. The route chosen was route number 3.

‘Not Immune to Risk’

Dr. Pundak admits that the route is not “immune to risk,” but adds, “We believe that in every solution Israel has created for itself over the years, it left a certain margin of security risk. The question is how to create appropriate monitoring in order to reduce the risks as much as possible. The route we are talking about was planned such that it would be far away from existing Israeli communities, and it would be built in a manner that does not allow traveling off the road and onto the Israeli road system. However, monitoring and safety controls are essential if this solution is to work.”

According to Dr. Pundak, “This project has three angles: the architectural-environmental angle, the angle related to planning the chosen route and the political-diplomatic angle. We preferred a route that takes account of the existing topography.” Route 33 does weigh factors such as the length of the route in the occupied Palestinian territory and in Israel, compatibility with engineering and planning criteria, security considerations, engineering feasibility, compatibility with existing building plans and environmental concerns. In fact, says Pundak, “construction on this route could start tomorrow, instead of waiting twenty years for an agreement.”

Have you suggested this route to the government?

“The previous government, the Olmert government, had begun considering these issues. I am not aware of the subject arising in the Netanyahu government. The reason we want to push this is that we believe that planning should be done today, yesterday, last week – before any other Israeli activity takes place in the area – like building additional communities and roads which would increase the cost of the project and make its implementation more difficult. On the other hand, as stated, this is one of the advantages of this solution – it can be implemented immediately.”