After more than half a century of occupation, most Israelis can no longer imagine themselves in the place of the Palestinians. But if we cannot imagine what it is like to live under occupation, we must at least confront its brutal reality. 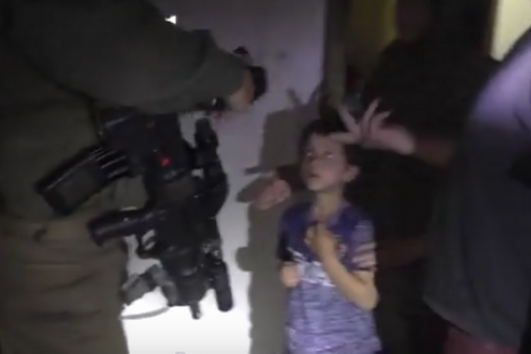 A screenshot from the B’Tselem video documenting the raid on the Da’na family’s home in Hebron.

Twenty years ago, in March 1998, the head of the Labor Party Ehud Barak was asked by Haaretz journalist Gideon Levy what he would do were he a young Palestinian living under occupation. “If I were a Palestinian of the right age, I would, at some point, join one of the terrorist groups,” Barak answered.

Today, not only is it difficult to imagine a Jewish Israeli politician making a similar statement; the question itself sounds imaginary. Can we imagine ourselves as Palestinians? What a strange idea. If there is one thing 50 years of brutal military rule over another people has seared into the Israeli consciousness, it is that there is one law for us, and another for Palestinians — that our destinies as human beings were meant to be different.

When you consistently and systematically abuse the Other for decades, this separation of consciousness becomes a kind of survival mechanism. The fact that we cannot imagine ourselves in the place of those living in Gaza — for example, subject to a siege that forces one to live a life of suffering and extreme poverty — allows us to carry on without pangs of guilt.

This mechanism works not only in the more extreme cases such as Gaza, but perhaps even better when it comes to what we have learned to call “the routine of occupation.”

Take the video below, which was published by Israel human rights organization B’Tselem on Thursday: soldiers invade the Da’na family home in Hebron in the middle of the night, waking up the entire family, including children and the elderly, to look for stone-throwers. Israeli soldiers are allowed, by military decree, to carry out raids in every house at every hour, without a search warrant. They break in with weapons drawn. “You entered our home, enter respectfully,” says one of the family members to the soldiers. A heartfelt plea to soldiers in helmets. What does occupation have to do with respect?

Arbitrariness — this another cornerstone of the occupation. The Palestinians must not know when their houses will be raided, at what hour, or when the raid will end. No one can testify to this better than the Da’na family. One of the daughters, who volunteers for B’Tselem, has documented a long chain of abuses committed by the IDF against the family, including the arrest of children even after soldiers admitted they were not sure the children they arrested were the children they were looking for. In March 2015, B’Tselem released video showing masked soldiers waking up terrified children who were sleeping on the floor and forcing them into the family’s living room. Look at the face of one of the boys, so shocked and confused when the soldiers ask him his name.

And the Da’na family does not just suffer abuse by the soldiers. Settlers have also attacked the family, and more than once before Israeli soldiers and police who stood idly by. This is the routine of the occupation.

How does it feel to live this way, exposed and completely vulnerable to soldiers who can raid your house at any time, bark commands at you, and dig through your personal belongings? How does it feel to stand defenseless as soldiers drag your children from their beds in the middle of the night and threaten them with the barrels of their rifles? What would we do if we had to live like that?

Twenty years after Gideon Levy asked Ehud Barak the question, it has become irrelevant to mainstream Israeli society. There is no sense in performing the hypothetical exercise. Under an apartheid regime, it makes no sense to ask the white what he would do in the place of the black. To imagine the the tables turned has become impossible. But if we cannot imagine what it is like to live as the Da’na family and so many others do under occupation, we can at least look at the pictures and watch the videos from time to time, so that we cannot say, “We didn’t know.”