What sounds like a basic democratic concept is not only at odds with Israel’s founding principles, it is viewed as a direct threat. Benjamin Netanyahu made waves in and outside of Israel this week when, responding to a statement by actress Rotem Sela that Israel should belong to all of its citizens, Arabs and Jews alike, he wrote “Israel is not a state of all its citizens.” While the shocked reactions should be welcomed, the indignation is also indicative of how little the world is paying attention to the mainstream discourse in Israel.

In Israel today, the prime minister saying that “Israel is the nation-state of the Jewish people — alone” is analogous to an American politician stating that “our children deserve the best future,” or “our troops are heroes” — a political statement so self-evident it might as well be on the flag.

Yet what sounds like a basic democratic concept is actually at odds with Israel’s founding principles. The term “a state of all its citizens” in the Israeli context refers to a political idea that has developed in opposition to the Zionist concept of a Jewish state. It is the idea that Israel will not be defined as a Jewish state, but rather a democratic one that grants equality to all its citizens, regardless of religion or nationality.

Israel was founded as “Jewish and democratic,” or more precisely, as the nation-state of the Jewish people in which non-Jews can live and theoretically have equal civil rights. These rights are enshrined in the country’s Declaration of Independence: “[the State of Israel] will ensure complete equality of social and political rights to all its inhabitants irrespective of religion, race or sex; it will guarantee freedom of religion, conscience, language, education and culture […]”.

However, civil equality was never truly granted to Palestinians inside Israel, as evidenced by discrimination and racist policies vis-a-vis issues such as land ownership, housing, infrastructure, income inequality, and police brutality, among many others. It is also important to note that these civil rights are entirely denied to the Palestinians in the occupied territories.

The inequality in national rights manifests itself most blatantly in the Law of Return, which grants any Jewish person around the world — as long as they are recognized by Israel as Jewish — the ability to immigrate to Israel. Meanwhile, the Palestinian people are denied that very same right. Millions of Palestinian refugees have no right to come back to their homeland, from which they were expelled during the Nakba in 1948.

According to Israeli logic, in order for the state to be “Jewish and democratic,” Jews must form a majority of the population. Should Jews become a minority, every justification for the Jewish character of the state and for laws that favor Jews will be rendered moot. Thus, continues the thinking, Palestinians can have “equal” rights so long as they remain a minority. To ensure their minority status, Israel ethnically cleansed them from Palestine in the 1948 war and then instituted a discriminatory immigration policy. 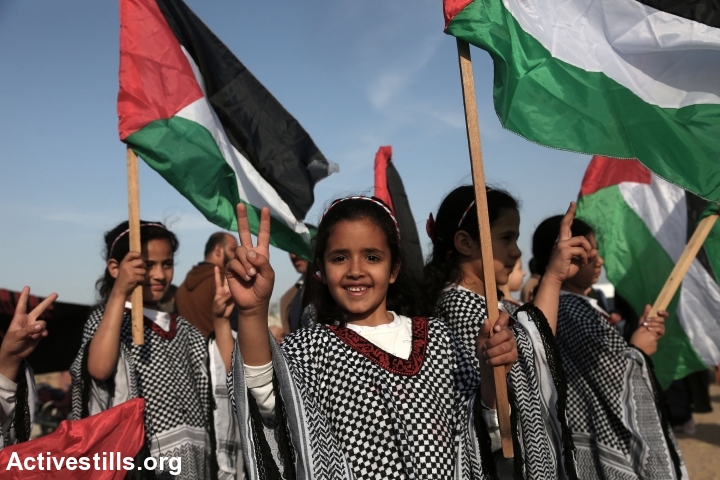 Palestinian children seen at the Great Return March camp, not far from the Israel-Gaza fence, near the neighborhood of Shujaiya, Gaza City, April 10, 2018. (Mohammed Zaanoun/Activestills.org)

None of the Zionist parties, not even left-wing Meretz, support the idea of Israel as “a state of all it citizens.” Conversely, Palestinian parties, and particularly Balad, have proposed a number of bills to try and change the definition of Israel into a state for all.

In late 2018, Balad put forward a bill for a new Basic Law, aimed at replacing the Jewish Nation-State Law, which sought to anchor the principle of equal civil rights for every citizen, while recognizing the existence and rights of both Jews and Arabs as national groups. The Knesset chairman stopped the bill from even being submitted. Just last week, Balad was barred from running in the coming elections by the Central Election Committee. And though this decision is likely to be rescinded by the Supreme Court, the message is clear: the idea of a true democratic state is one that threatens the Israeli regime.

The Netanyahu government’s naked racism has not only formalized the marginalization of Palestinian citizens of Israel — it has made it far more visible. Yet it is important to remember that the structural discrimination existed from the very beginning. It existed before the 1967 occupation and will likely remain with us should a two-state solution ever come into existence. That is why anything less than a state for all its citizens is by definition undemocratic. It’s time to stop ignoring this fallacy.