The controversy surrounding business ties of shipping companies owned by Israeli tycoons to Iran took a surprising turn in the Knesset today, leading to a torrent of security-oriented rumors and hints of covert operations

It’s been several days that the Israeli media is revealing information regarding alleged violations of the economical boycott on Iran by Israel’s richest business tycoons, Sammi and Yuli Ofer. The affair, which was first covered by the business sections of the papers, has come to dominate the news cycle in the last 24 hours, following a bizarre chain of events.

The Ofer Brothers made their fortune mainly in the shipping business. Since the 90’s, when Israel went through rapid privatization of public assets, the Ofer Brothers have become—through their holdings in Israel Corporation—the owners of some of the country’s largest companies, including the Haifa Chemical Plants and Zim, formally the national shipping company.

Today the Ofer Brothers own the world’s largest shipping company. They rank 79 in Fortunes’ list of world billionaires.

Their current troubles began when the US State Department announced it would impose sanctions on the Ofer Brothers Group, following sale of one of their ships (through a third company) to Islamic Republic of Iran Shipping Lines (IRISL). The Ofer Brothers claimed they didn’t know the tanker would end up in Iranian hands, but in the last few days, it was also revealed that no less than 13 of their ships—sailing under foreign flags—docked in Iranian ports.

While government ministers—including Prime Minister Binyamin Netanyahu—kept quiet on this issue, the media hasn’t. Pundits and commentators claimed that the Ofer Brothers not only violated Israel’s own law, but more importantly, severely hurt Israel’s demand that the international community tighten sanctions on Tehran.

This week, following claims from representatives of the Ofer family that all their activities were known to Israeli authorities, sources in the Prime Minister’s Office told the media that the state had no knowledge of the docking of Ofer tankers in Iran.

Yesterday, however, the affair took a surprising turn. First, former head of Mossad, Meir Dagan, said that the coverage of the Ofer Brothers issue has been “blown out of proportion.”

The daily Yedioth Ahronoth interpreted Dagan’s remarks as a “hint” to the media that the Ofer Brothers’ ships were traveling to Iran with the blessing of Israel’s security establishment. “Dagan’s hint” was the papers’ top headline today; under it a source in the Ofer holding group was quoted as saying: “Israel has used us for national interests more than once.” 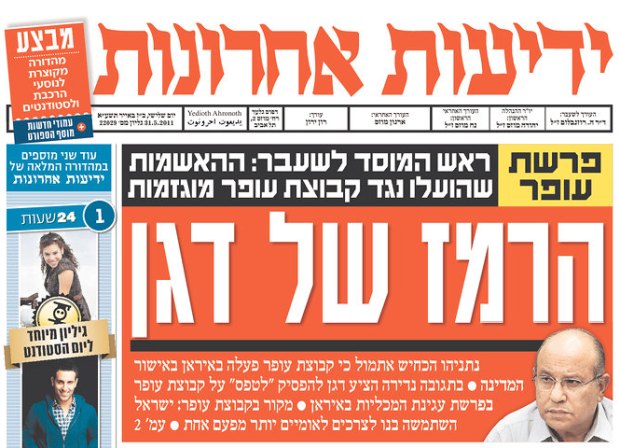 Later today, a debate in the Knesset’s economic committee on the activities of the Ofer Brothers was stopped abruptly by the committee’s chairman, Karmel Shama-Hacohen, a hawkish Likud Member, following a mysterious note that was slipped to him from an unknown source. Shama-Hacohen refused to disclose the content of the note, and just said the “it wasn’t political, nor business oriented.”

By this point, every other comment on the internet was some form of speculation about the covert operations of the Ofer family in Iran. In a few short hours, the Ofer family was about to go from villains to national heroes.

So, what was really in the note Shama-Hacohen got? Towards the evening, after several Knesset members demanded to know why the committee meeting was brought to an end in such an unorthodox way, Shama-Hacohen admitted the mysterious note had nothing to do with security (which leaves very few issues that it could have been related to), and the Army Censor issued a rare statement, declaring it had not nothing to do with shutting down the Knesset hearing.

So now, we are back in square one, and the Ofer family will have to come up with a better explanation regarding their activities than the vague hints of special operations. But once again, it was demonstrated how easy it is to spin the debate in Israel—to the point of stopping a formal Knesset hearing—once “national security” is mentioned.

UPDATE: Haaretz is reporting this morning (Wednesday) that the new National Security Advisor, Yaakov Amidror, worked for the Ofer Brothers at the time their alleged deals with Iran were made. Amidror, who denies any knowledge of ties to business ties to Iran, left his job with Zim and Israel Corporate roughly two months ago, when he was appointed as the new NSA.