Israeli society is undergoing a process by which the words ‘Eritrean’ and ‘Sudanese’ are becoming synonymous with the word ‘cleaner,’ while ‘Filipina’ has long ago become synonymous with ‘caregiver.’ And who else is behind the education process if not the Interior Ministry and the Justice Ministry? 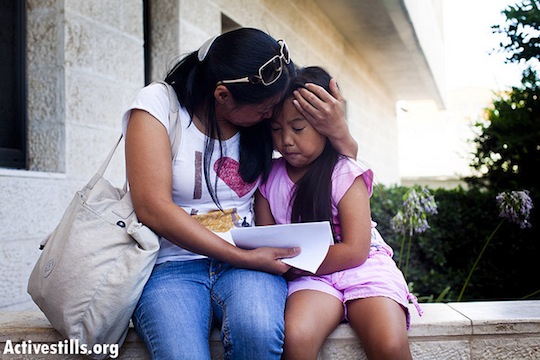 The job market in Israel has always been divided along nearly impenetrable national and “racial” lines; the Knesset, like the Supreme Court, is careful to maintain the divisions. In the past the divisions were primarily between Mizrahi Jews, Muslim Arabs, and Christian Arabs. These days there are different groups as well. There is a direct link between a recent Supreme Court decision on caregivers’ salaries and a law banning “infiltrators” from sending money out of Israel, which passed in its second and third readings in the Knesset last week.

In accordance with the law that passed in the second and third readings in the Knesset last week, “infiltrators” will be barred from sending the money that they earned outside of Israel. The law will apply primarily to asylum seekers from Sudan and Eritrea (who comprise 90% of “infiltrators”). These are two groups that the State of Israel does not deport, as it recognizes that deporting them will put their lives in danger; the state also refuses to recognize them as refugees. They are present absentees in Israel, living on the edge of the law – they cannot work but “benefit” from a stated policy (backed by the Supreme Court) of lack of enforcement on the ban on their employment.

The new law establishes a default, according to which when an “infiltrator” leaves Israel, he or she will be able to take property with a value that does not exceed the minimum wage multiplied by the number of months they spent in Israel. The individual will have to prove that every shekel beyond that amount of money belongs to him or her legally. Creating a close connection between the amount of money a person may take out of the country and the minimum wage reinforces the stereotype of the “infiltrator” as someone who necessarily works in unskilled labor and earns minimum wage (or less), and that there is no chance that he or she would be able to accrue a sum exceeding the minimum wage. If one’s savings are found to exceed the minimum wage, the money certainly belongs to someone else. Perhaps someone asked them to transfer the money; maybe they stole it. But it is unreasonable to assume that the money was earned legitimately, because they clearly hold lowly jobs. In this sense, the term “black labor” takes on a definition that strays from the nature of the work itself and links directly to the “black infiltrator.”

In our collective consciousness, cleaning contractor workers – who we see at every corner in major Israeli cities, in offices, on the street, in malls, and in government offices – are Sudanese or Eritrean. Most Israelis will never meet an asylum seeker aside from the one cleaning up after them. The connection that the law create between the image of the “infiltrator” and minimum wage reflects not only the link between national origin and profession and salary, but also reinforces it in our consciousness, makes it “natural” and transparent, and exacerbates it.

The same can be said regarding the recent Supreme Court ruling on caregivers. Three months ago an extended panel of judges determined that that the Work Hours and Rest Law does not apply to female caregivers. (The six male judges on the panel supported this ruling. The three women on the panel held the minority opinion.) The significance of this ruling is that female caregivers who work all or most hours of the day are ineligible for overtime pay. The ruling is based on the connection between the type of employment in which one works nearly 24 hour a day and the “foreignness” of the female caregivers. Obviously the small number of Israelis who work as caregivers are not employed under such an arrangement. One could assume that the Supreme Court would not stray from the principles of mandatory labor law for a group of tens of thousands of Israeli workers, and if it was to do so the Knesset would quickly step in. But when the assumption is that all of the relevant employees are “Filipina,” the court determines that it does not have the tools to handle the issue, and casts the decision to the Knesset; the status quo is convenient for the parliamentarians and they have no reason to amend the law.

The terms “Filipina” and “caregiver” have long been synonymous. Since most of those employed as caregivers are women, there is an added link in Israel between nationality, profession, and gender. Israeli society is in the midst of a process in which the words “Eritrean” and “Sudanese” are becoming synonymous with the word “cleaner” and are becoming ingrained as terms that have a one-dimensional significance in the labor market as well. The Interior Ministry and Justice Ministry, which stand behind the new law, encourage these developments and are taking part in the process of educating the Israeli public, which understands that black is he who earns minimum wage or less.