The lie about an alleged peace process does not end in Israeli schools or in the minds of Israeli soldiers in the occupation’s army; it is the pillar of international diplomacy, especially that of the United States. That is its true greatness. 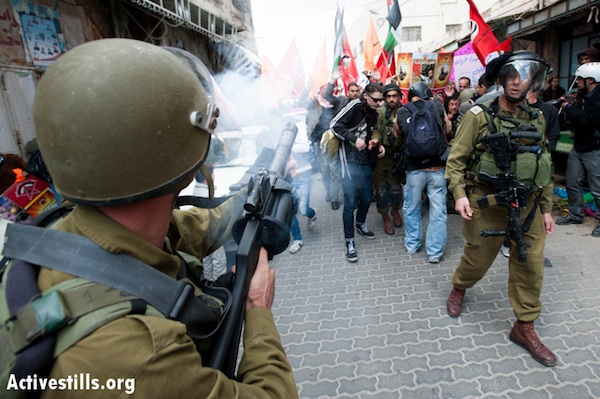 On June 6, exactly 46 years after Israel conquered the Palestinian territories, I came to talk to 50 high school students in a Waldorf school in the Galilee, on behalf of Breaking the Silence. The guard at the building’s entrance was an Arab woman; you can count on one hand the number of female Arab guards in Jewish schools. The teacher who asked me to come speak teaches Bible and basket weaving. As she took me on a quick tour of the school, it felt as free spirited as the Tel Aviv beach on a Saturday afternoon.

In Israel, the quality of a given school is determined – among other parameters – by the percentage of its students who go on to become combat soldiers. The larger the percentage, the happier it makes the Education Ministry and the school is rewarded with increased funding. However, this school being a private Waldorf school, it does not usually meet the government’s combat soldier-production expectations. And yet, only two months from now, these young people will be drafted into the IDF. Several of them will serve as occupiers, while many will indirectly serve the occupation.

The first student to enter the classroom was a young woman about to be drafted into the Border Police, notorious for its routine use of violence against Palestinians in the Occupied Territories. She asked me whether I was going to scare her. Envisioning this innocent girl disdainfully glaring at a handcuffed Palestinian while her comrades beat him up was enough to bring me to tears. “No,” I replied. “I’m going to tell you a true story that has been kept a secret from you.”

I screened a film full of arbitrary violence directed at Palestinians at checkpoints in the West Bank. I read a soldier’s testimony to them, a young man who had previously believed it wouldn’t happen to him, yet realized he had become inhumane and as he described how he became “addicted to controlling others.”

I told them my story, how as an IDF officer in the Occupied Territories I went about terrifying the civilian population there. I told them about breaking into innocent families’ homes of in the dead of night, destroying private property, looting, humiliating and seizing private homes and vehicles. I encouraged them to imagine not being able to reach the hospital or their school because the randomly situated checkpoint near them is closed. I had a hard time convincing them of the existence of such checkpoints; most of the students think the only checkpoints are for Palestinians crossing into Israel from the Occupied Palestinian Territories. I told them about the procedure of “shows of force,” our assignment: intimidating the civil population just for the sake of it, or in military terms, making them feel hunted.”

One teenager asked, “but isn’t there a peace process underway? If they give us their weapons, we will immediately cease doing these things you’re telling us about and we’ll have peace, right? But if we disarm, they’ll kill us all, right?” Through his question, in blissful ignorance, this free, privileged and naïve young Israeli demonstrated how the normalization of the occupation prevails — the project of erasing the occupation from Israeli discourse, including the political discourse.

This same Israel has succeeded in raising generations of young people who liken the one-sided occupation imposed by Israel to the symmetry of war. The Israeli army, who will call up these young people I spoke with a few weeks ago, is called the Israel Defense Forces, although it mostly imposes law and order on the Palestinians rather than defending Israel’s borders. These young Israelis are convinced they live in a democratic state, plagued by a minor and easily repaired malfunction, namely the Israeli-Palestinian conflict.

Why should I criticize this ignorant high school student when he is simply parroting the way Prime Minister Netanyahu presents matters? Netanyahu is one of the architects of the absurd transformation that has successfully separated the Israeli-Palestinian conflict from the Israeli occupation and its military rule over Palestinians. Last month, the prime minister directed a remark to Palestinian President Abbas. “Give peace a chance,” he said; how cynical. While increasing control over Palestinian civilians through the use of arms, Israel encourages the leaders of the occupied side to discuss peace, meaning a cessation of fighting – fighting that is not taking place. Israel wants to talk peace without ending the occupation. It wants to normalize the relationship between occupier and occupied.

Undoubtedly, there will be much to discuss with Palestinian leaders after Israel ends its occupation, unilaterally, with no preconditions – withdrawing its army and citizens from beyond its internationally recognized borders. That will be the time to talk peace: distribution of water, mutual security arrangements, economic relations and trade, exact borders, reciprocal visa procedures, etc.

But the lie about an alleged peace process does not end in Israeli schools or in the minds of Israeli soldiers in the occupation’s army; it is the pillar of international diplomacy, especially that of the United States, and that is its true greatness.

Like his predecessors, Secretary of State Kerry is asking the Palestinians for more time in order to bring the Israelis to the table. That is exactly what Israel is – and for 46 years has been – asking the world for just a little more time. When mutual violence rocks our land, the extra time we want is granted without even an afterthought. “Quiet! We’re shooting,” we say. And when things are quiet, like now, Israel needs a simulated peace process to buy more time.

In that extra time Israel buys itself, there are improvements in the security and economy of the Occupied Palestinian Territories while Israel deepens its eternal status quo and its military rule over a disenfranchised people.

Noam Chayut is a co-founder of Breaking the Silence, and the author of The Girl Who Stole My Holocaust (translated by Tal Haran), published by Verso.