An education system that brings an inherently violent organization in through the front door is failing at its most basic obligation. This policy is the first injection of militarism, ultimately meant to prevent our children from becoming critical citizens. 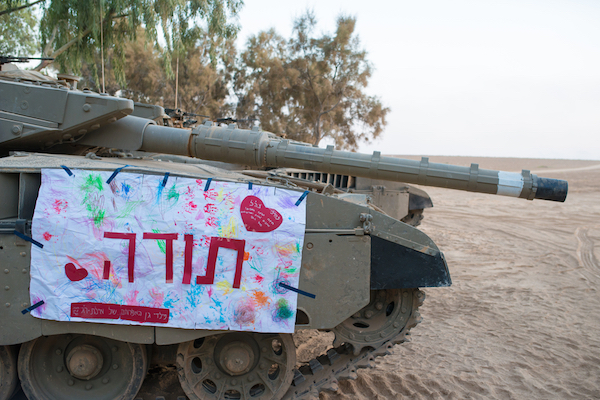 A ‘thank you’ sign sent by Israeli children hangs on an IDF tank. (Ran Zisovitch / Shutterstock.com)

Ten years ago, when my oldest daughter was five years old, I already had the honor of being the mother of a draft refuser.

One day, when she was in kindergarten, my young daughter came home with a notice from the kindergarten teacher asking parents to help their children prepare care packages for a soldier. The notice included a list of suggested items, and requested that the package include a drawing and letter from the child to the soldier.

I immediately called the kindergarten teacher and asked her if she didn’t think that four- and five-year-old children were a bit too young to be drafted into the Home Front Command. “What do you mean,” she responded, “It’s the most basic civic act!”

After a few seconds I realized that the conversation was futile. My little draft refuser didn’t go to kindergarten the next day and the next year, we moved her to a bi-lingual (read: integrated with Jews and Arabs) school, which solved the problem.

It turns out that indoctrinating children at a young age has become so deeply rooted in the education system that today, such notices are sent not by gung-ho kindergarten teachers but by the authorities themselves. The following is a letter that the Hof Hasharon Regional Council (an area north of Tel Aviv) sent to schools, kindergartens and pre-schools under its jurisdiction (English translation follows the image): 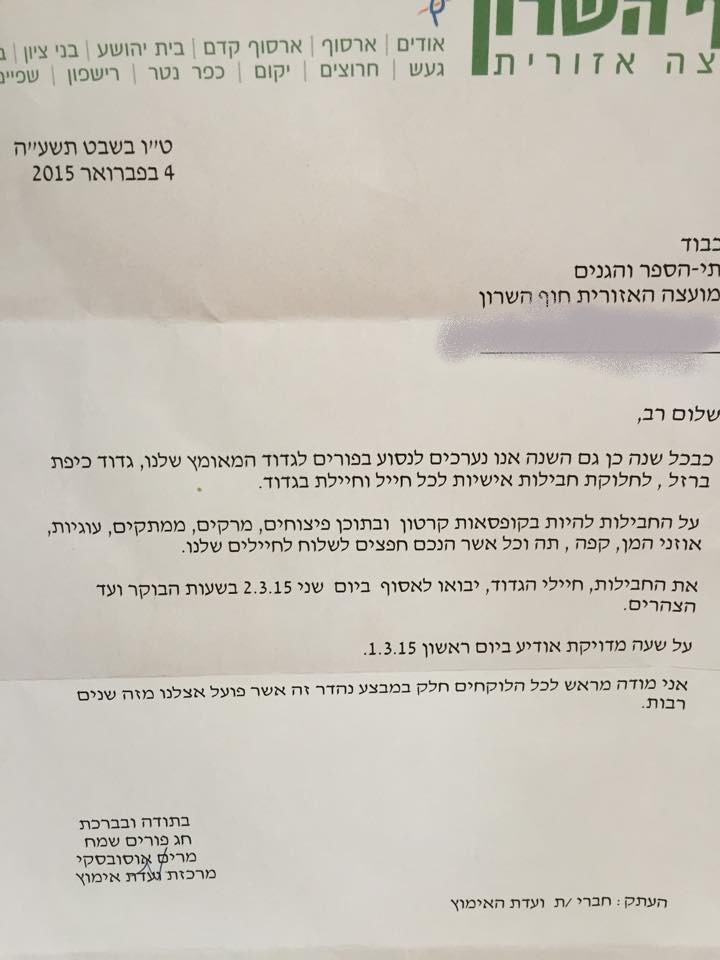 Letter sent by the Hof Hasharon Regional Council to schools and kindergartens.

To: Schools and Kindergartens
From: Hof Hasharon Regional Council

To Whom It May Concern:

Like every year, we are preparing to travel on Purim to our adopted battalion, the Iron Dome battalion, to distribute personal packages to every soldier in the battalion.

The packages should be cardboard boxes, inside them should be nuts, soups, sweets, cookies, Hamentashen, coffee, tea, and anything you want to send to our soldiers.

The soldiers in the brigade will come to collect the packages on Monday March 2, 2015, in the morning until the afternoon.

Thank you in advance to all those who are taking part in this wonderful operation, which we have been carrying out for many years.

So the regional council adopted an army battalion as if it were an abandoned street cat, and now the toddlers are being asked to leave them a bowl of milk on the sidewalk. Kindergarten children, stuck in an education system suffering from severe budget shortfalls, now need to donate care packages to the most well-funded and wealthy institution in the country? Nuts, soup, sweets, cookies, Hamentashen, coffee, tea, and more — has anybody calculated how much money that kind of package costs?

What exactly is the point of a such a strange adoption program? How did the tradition of sending care packages on Purim, one of the most beautiful Jewish customs that expresses social solidarity on the deepest levels, become a telethon of sorts? Does the wealthiest body in Israel really need our children to gather potato chips and chocolate bars for its soldiers?

The answer, of course, is that these types of initiatives are not meant to make donations to the army, but to donate our children themselves. It is a well calculated and thought-through policy, which from a very early age, hopes to start a slow IV drip of militarism, meant to immunize our children from becoming critical citizens capable of seeing this system from the outside as adults.

To a toddler sitting down to prepare a care package for a soldier, the soldier is somebody who needs their help, their protection. This dangerous role reversal is the basis of Israeli society’s deep-rooted militarization. The only parts of society still untouched by it are the ultra-Orthodox and Arab communities. To a certain degree, the entire Jewish-Zionist society is one large kindergarten that still prepares care packages for soldiers.

The army is by definition a violent organization. That’s not a judgment, it’s fact. As an inherently violent organization, it should play absolutely no role in children’s education. The fact that the Israeli education system has volunteered to usher the army through the front door into this safe space is nothing short of scandalous.