Despite Netanyahu’s claims of ‘self-defense,’ testimony by Israeli soldiers suggests that mounting Palestinian casualties are the result of intentionally provocative tactics. 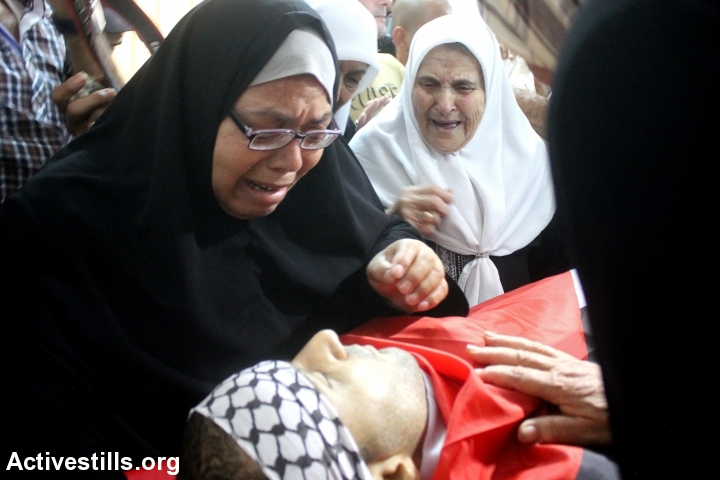 Relatives grieve over the body of 26-year-old Ahmed Fahmawi, who was killed by Israeli soldiers at Al Ein Refugee Camp during a night raid, Nablus, West Bank, June 22, 2014. According to Palestinian medical sources, Israeli soldiers killed Fahmawi near his home after they raided the refugee camp in search of three Israeli settlers. (Activestills.org)

In response to the mounting numbers of Palestinian deaths, Prime Minister Benjamin Netanyahu offered the excuse that Israeli military action in the West Bank “entails a certain friction with the civilian population,” and that “we have no intention of deliberately harming anyone but our forces are acting as necessary for self-defense and from time to time there are victims or casualties on the Palestinian side as a result of the self-defense actions of our soldiers.”

At the time of this posting, six Palestinians have been killed in the massive military operation that was launched after the kidnapping of three Israeli youth near a West Bank settlement. But attempts to cast the rising number of unarmed Palestinian casualties as “self-defense” rings hollow when taking into account the testimony of former Israeli soldiers collected by Breaking the Silence. In an event that took place just days before “Operation Brother’s Keeper” was launched, the public testimony of former soldiers recounted routine tactics used by the Israeli military. The group’s founder, Yehuda Shaul, is emphatic that, “the testimonies we have collected are not exceptional,” but reflect standard operating procedure. 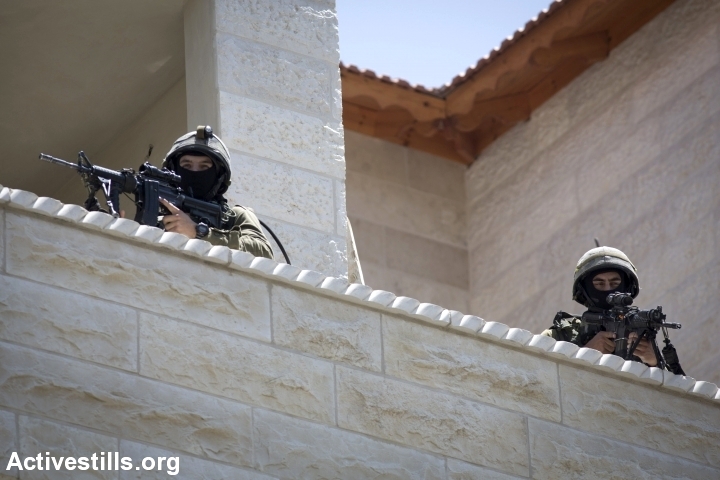 One sergeant testifies that as recently as 2014 his unit used a tactic known as “Provocation and reaction,” which he describes as, “the act of entering a village, making a lot of noise, waiting for the stones to be thrown at you and then you arrest them, saying: ‘There, they’re throwing stones.'”

What we’d do was go out night after night, drawing fire, go into alleys that we knew were dangerous. There were arrests, there were all kinds of arrests. But the high point of the night was drawing fire, creating a situation where they fired at us. It’s a situation, totally insane, you’re in it, it’s hard to explain. You’re looking through the binoculars and searching for someone to kill. That’s what you want to do. And you want to kill him. But do you want to kill him? But that’s your job. 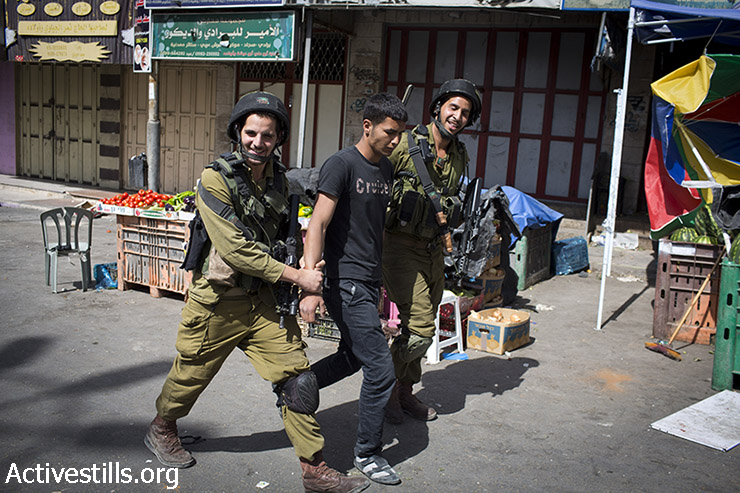 Israeli soldiers arrest a Palestinian youth during clashes in the West Bank city of Hebron, after the Israeli army raided the city in the last days, June 16, 2014. (Oren Ziv/Activestills.org)

As noted by a recent +972 article by Yael Marom, an ultra-Orthodox news outlet quotes an officer saying that the same thing is happening during current operations:

[T]he officer stated that the army is intentionally trying to agitate the population in order to provoke stone throwers, which will allow Israeli snipers to kill them. “There was a group of snipers on the roof – an entire unit that moves on the outskirts of Jenin in order to make noise and raise tensions,” he said. “This was actually the true goal: to provoke them into causing disorder, and then put down those causing the disorder.”

Netanyahu claims he will soon reveal proof that Hamas is behind the abduction of the three Israeli youth. But regardless of any group’s culpability, it is clear that many Palestinians with no connection to the kidnapping are being collectively punished, and in some cases killed, as a result of intentionally provocative military actions.

“Operation Brother’s Keeper” borrows a well-known biblical phrase coined by Cain, used while attempting to dodge responsibility for the murder of his brother Abel. Perhaps borrowing the words of an obfuscating killer is more appropriate than the Israeli military’s PR officers intended.

More on the kidnappings:
IDF kills two Palestinians far from center of search operation
This is what a military operation in Hebron looks like
Is Israel trying to force a third intifada?