As part of the campaign of quiet terrorism against Palestinians, IDF soldiers assault sheep with stun grenades. 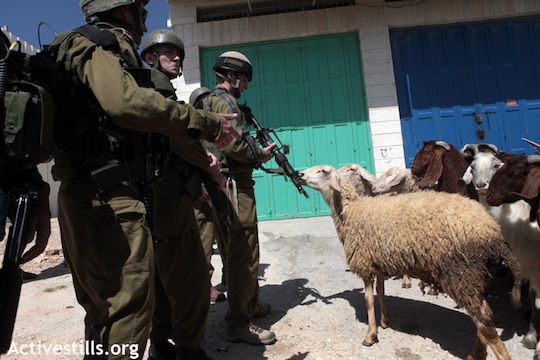 One day in September, Walid Said Muhammad ‘Id, a resident of Burin – a village unfortunately surrounded by settlements and outposts, whose inhabitants as a result are frequently attacked by settlers – went with his son to herd their flock of sheep. Their pasture is close to one of the nearby outposts, Har Bracha B.

About an hour after the two reached the pasture, they observed three soldiers coming down toward them from the outpost. Yes, the outpost – illegal as it maybe – is protected by the State of Israel. This is just a regular part of life that we generally ignore; but it should be mentioned from time to time. Imagine a band of outlaws takes over other people’s land and instead of removing the outlaws the authorities hurry to protect them, even though they openly state that the outlaws’ presence there is illegal.

The soldiers ordered ‘Id to remove his sheep from the pasture, and he in turn informed them that he was renting this plot, and that it is located in Area B and not Area C, and he refused to evacuate. The soldiers repeated their demand and ‘Id repeated his refusal. The soldiers then spoke at length on their cellular phones. Finally, they turned back to the outpost.

And then the other soldiers arrived. The two groups of soldiers passed each other, and the soldiers in the second group, without uttering a word, pulled out stun grenades. These are a small explosive device which creates a flash and a loud noise, intended to cause panic and disperse demonstrations. The soldiers threw about ten stun grenades into the flock, and the sheep, terrified, dispersed in all directions. Then the soldiers turned on their heels and left.

‘Id has committed no offense. Had he committed any, even the smidgen of an offense, the soldiers would have detained him. They are not, after all, accountable to anyone.

The soldiers had no argument to field against him, not even some dubious security excuse. So they went straight to terrorism: they used violence against his flock and dispersed it. Oh, you think you may take pasture here? You have the “chutzpah” to maintain your rights in the face of an armed Jewish male? We’ll show you.

If there is a hell, and in his low moments the undersigned thinks perhaps there should be, it ought to contain a special circle for those who abuse the helpless: to those who abuse a baby, a child, a bound human, a frightened animal, anyone who is incapable of understanding what is happening to him, or why it is happening, to protest or to defend itself. Here is the 2013 model IDF: the strongest army in the Middle East – when it comes to terrorizing sheep, at any rate. What’s next? Firing tear gas at cows? Dispersing goats with the “Skunk,” the IDF’s patented stinking liquid-squirting vehicle? Shooting rubber bullets at herding dogs? A nightly raid on chicken coops, stuffed full of terrified flightless birds? Holding beloved pets in administrative detention?

The goal of the soldiers, of course, was to terrorize ‘Id; to enable the quiet terrorism of the settlers, whose point is to take another acre, steal another goat, by scaring the Palestinians away and making them despair of their lands. But, unlike the scenario to which they’ve grown accustomed, the soldiers were facing a man who stood up forcibly for his rights. So, instead of dealing with him, they attacked his animals, those innocent of any crime, the helpless of the helpless. They could, we should remind you, done a lot more: they could have detained him and assaulted him though he was guiltless, knowing that the chances they would pay any sort of price for their actions are nil. I guess they couldn’t muster the courage.

This isn’t just terrorism, just despicable cowardice, just cheap sadism: it’s also very bad soldiering. An army whose troops get used to dealing with challenges in this way ought not to be surprised when, facing a real enemy, it marches toward it on a single road and flees from it on seven. Commanders who turn a blind eye to such incidents, and a public which does not want to know, not only raise a new generation of coarse thugs who will return to civilian life as coarse thugs: they also turn an army into an occupying garrison, a broken tool. Many Israelis pride themselves on not having any moral sense, in recognizing only what is utilitarian, that morals “are for the weak.”

So this is an argument for the “strong ones.” Particularly when they need to prove their strength to sheep.