A name is more human, more familiar and more expansive than any label can ever be. It is something that everyone in the world has in common. It is therefore in that name that I refuse to step in line behind a massacre masquerading as an existential and moral crusade.

This directive was sent to me yesterday afternoon through Facebook, from a complete stranger. A little while later another message arrived, with an attached picture of the body of a murdered child, still lying on the floor of his bedroom – the crime scene – with blood all around. A mezuzah is fixed to the doorframe in the foreground of the photo. The picture was accompanied by the sender’s suggestion that I am in favor of the killing of Jews.

I assume the two messages were sent by the same person, as although they had different names, their profile pictures (of two men standing side by side, grinning) were exactly the same. I cannot say with absolute certainty what provoked these messages, as I immediately reported and blocked the sender(s). I am confident it is not connected to the articles I write, as I go by a different name on Facebook (for precisely the reason of trying to limit where and how much hate mail can come my way). Based on past experience, and the timing of the messages, I am fairly positive they arrived in response to my posting in public forums (regarding open positions at the company I work for) while having a profile picture that states ‘Not in My Name’ in English, Hebrew and Arabic. Given Israel’s recent assault on Gaza, it is fairly obvious to what this slogan relates. 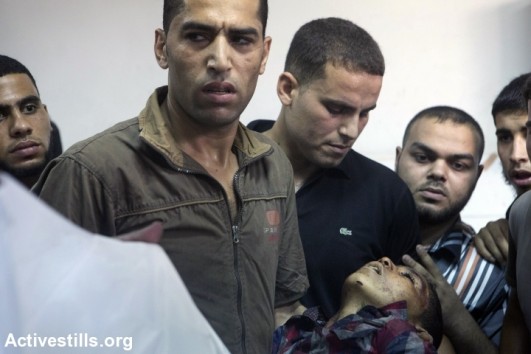 A relative carries one of the children killed earlier in an attack in a playground in al-Shati refugee camp, Gaza City, July 28, 2014. Reports indicate that 10 people, mostly children, were killed and 40 injured during the attack which took place on the first day Eid (photo: Activestills)

That’s it. No overt side-taking, no public declaration that I consider the Israeli army’s operation in Gaza to be a massacre, and my government to be in the process of committing war crimes (of a far more egregious nature than those of Hamas and Islamic Jihad), although I am taking the opportunity to state these opinions now. Simply a timid, almost platitudinous phrase. ‘Not in my name’ is the epitome of pulling punches; it is my feeble, small attempt to try and create some distance between myself and the thick smog of nationalism and uncontrollable racism blanketing this country. It is a hint at the fact that even as I am woken up in the morning by explosions in the sky above my home, and I check my phone with a pounding heart and a foggy head to confirm the rockets were intercepted, the muted flicker of relief is stamped out by shame and confused despair at the accompanying headlines of the latest heavy artillery rampage in Gaza. It is my subtle way of telling the world that living under regular rocket fire for weeks has given me the fraction of comprehension needed in order to weep in vicarious terror while watching shelling in Shejaiya, and that this video scares me far more than sirens in my own city.

‘Not in my name’ is an acknowledgement that while I deplore what is taking place, I am nonetheless part of a society that is staggering around in a bloodshot-eyed war frenzy, screaming for death and revenge – and that I therefore bear some responsibility. It is an admission that as much as I wish it weren’t, this bloodshed is very much happening in my name.

In the Israel of today, such thoughts and stances are sedition, treason, heresy. To the rightwing here (very much in the majority) I am betraying my (read: our) country, people, history, heritage, religion, land. I am betraying the concept on which this country was founded, and on which it is gradually being torn apart: the united Jewish people, in their united homeland, forever and ever, amen. In this nation, which eats, sleeps and breathes its past sufferings, it is our patriotic duty to place every new conflict in the continuous narrative of attempts to extinguish the Jewish people; it is the ethos of the State of Israel that those who live must re-live, mourn and struggle, memorialize and fight. In this mindset, any aggression is merited under the banner of self-defense and survival; to believe otherwise is to forget, and to forget is a crime (unless you are Palestinian, in which case to remember is a crime). We are prisoners to our past, and we have made an entire other nation prisoner to our past, too.

What holds true for the rest of the world holds true for Israel and Palestine: When people attack others for their beliefs or identity, they are not attacking individuals – they are attacking ideas. In any episode of political or ethnic violence, categorization is a key component; the label replaces the individual’s name. It is an effective tactic. To define is to reduce, for what potential is left in the categorized? A name is more human, more familiar and more expansive than any label can ever be. It is something that everyone in the world has in common. We all have a name, and it is the beginning and end of ourselves, even as we too often forget that the same is true for every other human being. It is what makes naming the dead on ‘the other side’ in wartime such a powerful, transgressive act; it undermines our narrative and the fragile fortress of self-belief and moral righteousness we construct during times of conflict in order to justify the lives we take away and the sacrifices we make. It is why the Israel Broadcasting Authority banned an Israeli NGO’s radio advert listing the names of the children killed by the Israeli army in Gaza. 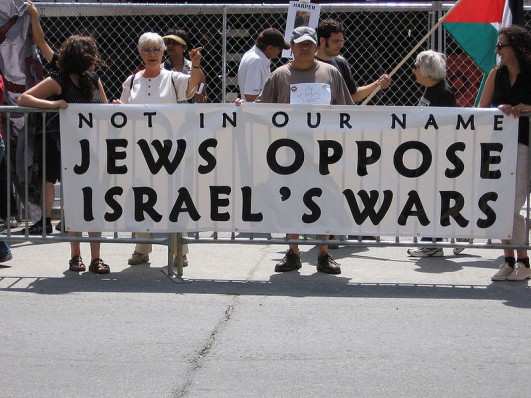 Our names, I believe, are our greatest hope. As Salman Rushdie has suggested, true freedom is the freedom to reject, and he is right: Only with complete independence and security is it possible to cast off the definitions that form the boundaries we use to prop ourselves up. It is my profound hope that there will come a day in Israel and Palestine when enough mutual security will be felt in order to unshackle ourselves from our competing categorizations, because the labels that surround and define us – that everyone here is tripping over, choking on, blinded by – have become too burdensome to keep carrying around.

For my part, I don’t really belong in Israel/Palestine; I’m not from here and will never understand what it is like to have been born and brought up here. But it is my home and where my heart and mind thrive, and that ambiguity is the source of my privilege here: being on the margins of society offers an easy escape from labels and boxes.

All I really brought with me from the UK was my name, and it is therefore in that name that I refuse to step in line behind a massacre masquerading as an existential and moral crusade. It is in that name that I stand against the occupation of 1967, and the ethnic cleansing of 1948. And if in response to these statements one will call me a traitor, an extremist, a leftist, a dyke, a kappo, an anti-Semite, a self-hater – I will respond with my name. If I am called a Jew, a goy, a half-caste, a foreigner, an immigrant, an outsider – I will respond with my name.

I have no need to be free of my name, for it is my whole person, and it encompasses all of what I am, of who I am, who I have been, and who I ever will be. And it is for that reason I say, again: not in my name. It may be a small, cowardly stand in the face of such violence, extremism and injustice, but it is a stand that no one else in the world can take.

This article was originally published on the author’s blog.

Related:
How Europe’s Jews lost their humanity in Gaza
How can you possibly oppose this war?
WATCH: British Jews hold memorial for Gaza dead at Zionist Federation conference