+972 published video of undercover Israeli soldiers restraining a Palestinian stone thrower and shooting him point blank in the leg. An astonishing number of people looked at the evidence and refused to believe what they saw.

Yesterday I published a post about a video that showed Israeli plainclothes undercover soldiers restraining a Palestinian youth at a West Bank demonstration and shooting him in the leg at point blank range. The youth was clutching a small stone, but was otherwise unarmed.

These undercover agents are called “mistarevim” in Hebrew (meaning disguised as an Arab) and “mustarabeen” in Arabic. According to reports from several sources, including the AFP,  journalists witnessed a group of mistarevim infiltrating a demonstration in the West Bank and then suddenly producing handguns, which they shot directly at the Palestinian protestors.

At one point two of the undercover troops grab one of the Palestinian young men and restrain him, while a third presses the barrel of his handgun to his thigh and pulls the trigger. The ‘pop’ of the weapon is audible. Uniformed soldiers punch and kick the wounded youth and then drag him away.

A still image taken at the scene by Activestills photojournalist Muhannad Saleem shows the youth being carried away on a stretcher by soldiers wearing the latex gloves used by medics. There is a tourniquet tied around his thigh above a bleeding wound, and he is wearing an oxygen mask. 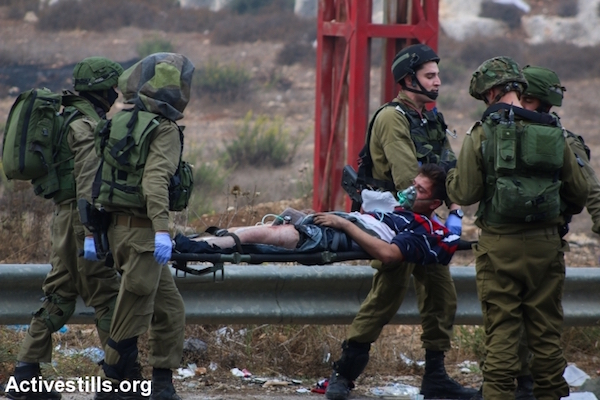 An astonishing number of people looked at all this evidence and refused to believe what they saw. And they were upset with the messenger, too. Yesterday +972 editor Michael Schaeffer Omer-Man and I were inundated with testy emails and social media messages from people who demanded additional evidence proving the undercover agent had really pulled the trigger and shot the boy.

The multiple witnesses, the videos and the photographs were not enough. Some claimed they did not hear the gun being discharged. Others claimed they saw the Palestinian youth walking after he’d supposedly been shot, which proved that the undercover officer had not really pulled the trigger. On Facebook, there were long threads of comments claiming the video was fabricated, a “Pallywood” production.

But then the army spokesperson responded to our query and confirmed nonchalantly that yes, the shooting had occurred as witnessed and documented. “It was an accurate shot that disabled the central suspect who fought back even after the soldiers attempted to arrest him,” said the spokesperson, in a statement that we appended to the original post. No apology, no attempt to dispute.

The army apparently believes it’s acceptable to restrain an unarmed protestor and “disable” him by shooting him at point blank range in the leg.

These undercover units have existed for years, and so has the practice of having agents — sometimes police, sometimes army — infiltrate demonstrations and violently detain protestors. So, too, has the practice of assaulting, and even shooting, unarmed civilians when they are physically restrained and unable to defend themselves. Former undercover officers have spoken about their experiences in interviews for Israeli documentary films, and Breaking the Silence has documented these practices in interviews with former soldiers.

The tactics of the undercover units are actually well known. But this is the first time we’ve seen such vivid, indisputable video evidence. And now we have the army’s acknowledgement that not only do they know about these practices, but they sanction them.

So now I have Jewish friends asking me nervously what they should think. They want to believe these practices are rare and committed by outliers who act in contravention of accepted procedure. But that is not the case, and that is what I tell them. It’s not easy for them, because most Jews cherish the idea that Israel is somehow better, or that Jews wouldn’t do things like that. Too many American Jews have outsourced their identity to Israel, and now they are not sure what to do with the creeping existential crisis.

The thing is, I’ve never seen anyone question or demand more evidence in cases where the media reported that a Palestinian had carried out a violent attack. None of my Jewish friends or journalist colleagues seem to dispute that Fadi Alloun, the Palestinian youth who was shot by police four days ago after stabbing a Jewish teenager in Jerusalem, actually carried out the stabbing.

I’ve seen plenty of people dispute whether or not Jews actually carried out the “price tag” arson attack on the Dawabshe family, too, despite the Hebrew graffiti at the scene and the security forces’ certitude that the crime was committed by Jewish settlers who lived nearby (although they still haven’t managed to charge anybody with the crime). Meanwhile, the Jewish teenager who attacked Arab citizens in Dimona with a knife has been handed over for psychiatric assessment rather than arrested and charged with attempted murder.

There’s something quite racist in the implicit assumption that when Palestinians commit random acts of political violence they’re motivated by senseless hatred, while a Jew who does the same to an Arab just needs a psychiatrist. The same goes for this unwillingness to believe that an Israeli undercover officer would actually shoot a Palestinian in the leg —  then kick him in the abdomen and head and drag him several meters along a rock strewn road, as though he were an animal carcass or a sack of potatoes — despite all the evidence.

Perhaps the muted expressions of disquiet over these images are a sign that caring people with liberal values are starting to wake up to a fact that should be self evident: you can’t maintain military rule over an unwilling population without engaging in acts of cruel violence.