When the Dutch prime minister offered a way to safely transport goods from Gaza to the West Bank, Prime Minister Netanyahu made sure to put the kibosh on the plan. Why? Because. That’s just the way it is. Security reasons. 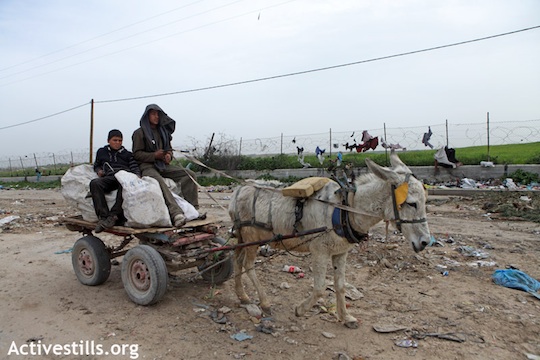 Palestinian youth on a cart in the no-go zone along the Gaza-Israel border fence, February 14, 2012 (Anne Paq/Activestills.org)

You may have read in Haaretz that Prime Minister Benjamin Netanyahu met with the Dutch prime minister this week to explain a few things about Israel’s national security. Maybe you didn’t quite understand why this is a story. That’s not surprising. The story is Gaza, and it’s a story that doesn’t make it to the news too much. So, if you’re interested, and you should be, here’s a little context:

Try to imagine an economy without exports. It’s not self-contained, because it does not really supply all its own needs. It is simply an economic entity that sells almost no goods outside its territory – a large-scale economic experiment. That’s what the Gaza Strip is today.

Why is this the case?

The only crossing used for transporting goods outside of Gaza is Kerem Shalom, which is controlled by Israel. Israel allows goods to exit Gaza, but only if they are not sold in the West Bank or inside Israel itself. Goods that exit Gaza are transported on Israeli soil, and shipped to Europe via the Ashdod seaport. Goods exit Gaza, get shipped through Israel and the West Bank to Jordan. Goods are transported to Ben-Gurion International Airport in Israel and flown to the USA. These same goods cannot be sold here, or in the West Bank. Why? It’s unclear. The only reason Israel has given is the “separation policy,” i.e., separating and distinguishing the West Bank and the Gaza Strip from one another. What are the reasons for this policy? Well, it depends who you ask. Who conceived and implemented this policy? Unclear. When? Unknown. Why? Because.

Why is this important?

Because before the closure, 85 percent of the goods shipped out of Gaza, were sold in Israel and the West Bank. These are the main markets for Gaza’s products. European markets are too far, and the cost of shipping is very high. In fact, it is so high that the Dutch are funding about half the agricultural products chosen to be part of the European export project. It’s more of a humanitarian project than an export project, and it looks like it too. Before the closure, 1,064 trucks left Gaza every month. In October, only 10 trucks left. Ten trucks in an entire month.

So what does an almost export-less economy look like?

Like this: 32.5 percent unemployment in the third quarter of 2013. Before the closure, 400 farmers grew strawberries. Ahead of 2011, there were only 75. In 2007, 150 farmers grew sweet peppers. Ahead of 2011, the number dropped to 13. Only 13 farmers in an area that has a population of 1.7 million. There are more figures. We could talk about that 51 percent or so of factories in the Gaza Strip which are either entirely out of commission or operating at half capacity or less (this is a 2010 figure, the situation has likely gotten worse). We could talk about people, usually children, who collect gravel in the “buffer zone”, risking getting shot by the Israeli army, because they have no other work. But never mind, you get the point.

Now, The Netherlands has decided to do something about this export ban. If there are security problems, the Dutch said, we’ll buy a new scanner for the Kerem Shalom crossing that can check the goods shipped out of Gaza. The Dutch hoped that Israel would then withdraw its objection to the sale of Gaza-made goods in the West Bank. Millions of Euros and over a year of work went into this project, and the scanner has changed nothing. Israel still refuses to allow the sale of Gaza goods in the West Bank, giving no reasons.

So, the prime minister meets with the Dutch prime minister, and instead of explaining why this ban is in place he says: “You have to understand that sometimes it gets abused.” He doesn’t explain how. He just gives the tunnel as an example. What does the tunnel have to do with it? Unclear. Why does Israel allow goods from Gaza to be shipped through its territory, but doesn’t let the same goods be sold in the West Bank? Unclear. That’s just the way it is. Security reasons.

So this is the context. You’re welcome to decide for yourselves if Netanyahu’s explanations are convincing. I’m not convinced. Israel has real security problems when it comes to the Gaza Strip (and the Palestinians in general). There are real risks and real challenges, but Netanyahu and Defense Minister Moshe Ya’alon cynically use them to justify a policy that was never explained to the public and that no one has ever taken responsibility for – a policy that looks a little too much like collective punishment.

And nobody’s talking about it. It’s too complicated. It’s Gaza. And besides, we left Gaza, so what do you want from us anyway? It’s Egypt’s problem.