The three teens who set fire to the Jerusalem bilingual school in November have one less thing to worry about: according to the state, their actions are no longer considered racist. 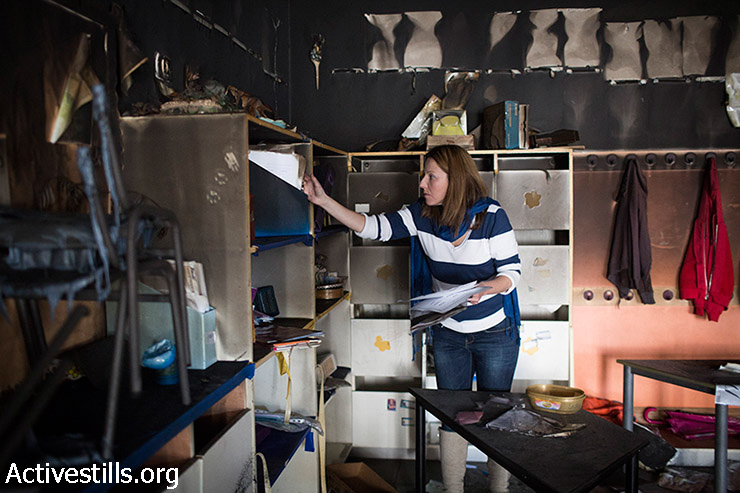 A teacher inspects the damage in the aftermath of an arson attack that targeted first-grade classrooms at a bilingual Jewish-Arab school near the Palestinian neighbourhood of Beit Safafa, in southern Jerusalem, November 30, 2014. Anti-Arab slogans were scrawled on the walls in Hebrew reading: “Death to Arabs”, and “There’s no coexistence with cancer.”

Nearly five months after Jewish extremists set fire to first-grade classrooms in Jerusalem’s Max Rayne Hand in Hand school, the prosecution has reached a plea bargain with two of the three suspects — brothers Nahman and Shlomo Twito — which would remove the clause stating the arson was racially-motivated.

I must admit that beyond the anger and frustration, this piece of news caused me to laugh at my own naivety: when the three young men suspected of the attack were arrested — all three of whom are active in the racist, anti-miscegenation group Lehava — I became worried that the system would act severely against them only because this was considered a high-profile case. Don’t get me wrong, I did not take the matter lightly, nor did I think they shouldn’t have received a punishment that fit the crime. Setting fire to a school is horrible, especially when it is clearly driven by ideology, as in this case. But I also thought, and I still think, that the root of the problem goes far deeper than these three young men, who were enlisted into Lehava leader Benzi Gopstein’s poisonous ranks. Gopstein was never indicted.

During the last elections, I joined Gopstein and far-rightist Michael Ben-Ari as they campaigned in Jerusalem’s Mahane Yehuda market. There I spoke with a young Lehava activist [Hebrew], around the same age as the three suspected of the arson. In another time and place, he could have been one of them. “Wise, clairvoyant and frightened,” I wrote about him at the time. How did this teenager, like the other three, find his way into Gopstein’s arms? This question shouldn’t only worry those in the Shin Bet’s Jewish terror department, but Israeli society in its entirety. Their involvement in these activities is also our failure as a society, and this is a failure we continually refuse to pay attention to.

Israeli society does not want, and perhaps is not able, to draw its own red lines. It is possible that the paradox lies in the fact that we cannot expect borderless state to draw its own borders. There are those who believe that taking off the mask of democracy and letting go of our pretension of morality — in a reality that lacks both — is a positive thing. There are, of course, those who claim that the expectation that the Israeli justice system recognize the arson as a hate crime is tainted with hypocrisy, since one of the system’s main roles is to validate the systematic racism of the state itself. 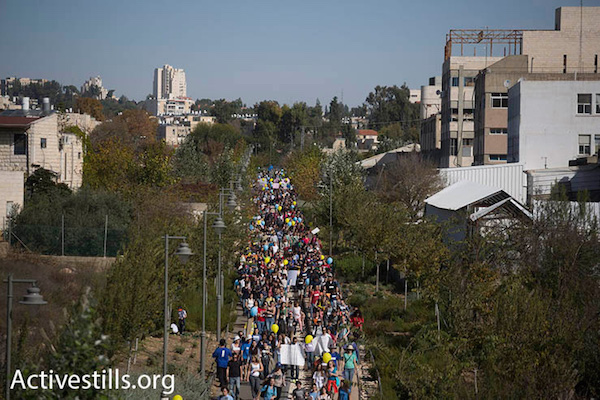 But in its decision not to recognize the racist nature of the arson, the system did wrong not only by the victims of the crime, but also by those responsible, and many others like them. A system that is unable to explain to these young people that they are being punished not because they vandalized property, but rather because what they did was racist. This is a system that outlaws Kahanism while paving a path for Kahanists to the Knesset. This is the same system responsible for these arsonists, as well as the ones who will follow.

The punishment isn’t the issue

As I write these words, it is still unclear what kind of punishment the suspects will receive as a result of the plea bargain. It is certainly possible that they will receive a harsh sentence: pleading guilty to arson alone could land them in prison for 15 years. But a harsh sentence without a conviction for incitement to racism is worthless. In fact, the damage it causes outweighs the benefits.

Since that same morning, in which students arrived at the bilingual school while the smell of charred schoolbooks still floated in the air, there has been much support for the school, as well as much condemnation of the attack. However, the students have yet to hear an apology from Channel 1, which broadcasted a deceitful news item [Hebrew] by Itzik Halperin, who claimed that some of the Palestinian students support terrorism, just a few days before the arson. And now, they will most likely hear that the attack on their school was not racially-motivated.

The students at the bilingual school do not need the court’s approval to call a spade a spade. Our students know how, almost instinctually, to recognize and condemn racism in all its forms. In fact, it is Israeli society that needs to learn this kind of recognition.

Now all we can do is wait and see what kind of punishment the two brothers receive. The third suspect, Yitzhak Gabai, who is being represented by Attorney and far-rightist Itamar Ben-Gvir, refused to take part in the plea bargain, and is currently trying to prove the inadmissibility of the statements he gave to the Shin Bet during his interrogation. It is likely that Gabai knew exactly what he was doing. If Ben-Gvir was able to convince the court that his friend Baruch Marzel is not a Kahanist, I won’t be surprised if at the end of this entire ordeal, the bilingual school will have to compensate Gabai for the anguish he went through while lighting a first-grade classroom on fire.