The army’s new hasbara video is meant to convince the English-speaking world that it protects Palestinians from settlers during the olive harvest, as if the latter were some kind of untamable beasts. 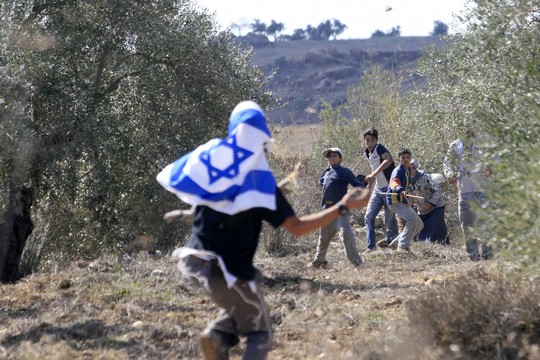 An Israeli settler, masked with an Israeli flag, and Palestinian boys throw stones during clashes at an olive harvest close near Nablus, Wednesday 25, 2006. (Olivier Fitoussi/Flash90)

With the beginning of the olive harvest, the IDF has decided to wish all Palestinians a bountiful and safe season!

A new video being spread by the IDF on social media seeks to placate the worries of anyone worried about the safety of Palestinian farmers during the harvest. Focusing on Palestinians in Hebron, the video — with English subtitles, of course — announces to the world that due to the army’s protection, this year’s olive harvest is going smoothly.

The video features an elderly man from Hebron filmed in his grove, where he is able to tend to 90 trees because the army sends soldiers to ensure he can harvest, alhamdulilah. Everything, then, must be fine.

It’s unclear who the army is targeting with this video, and why a Palestinian farmer needs to thank the army for protecting him. After all, he’s only doing what every single owner of an olive grove has done every fall for the past thousands of years: he goes up to the hill, lays out a mat, complains about the lack of olives but says that the oil will be excellent and that, anyway, his olives are superior to those of the neighbors.

This isn’t the situation in Hebron’s Tel Rumeida neighborhood. The banal act of harvesting Palestinian-owned trees has turned into a complicated military mission for soldiers. Why? Because of one thing and one thing only: the settlers. Jewish settlers who threaten Palestinians on a yearly basis, make their lives difficult, and do everything they can to make Palestinians disappear from the breathtaking hills of the West Bank.

Attacks against Palestinians on their land have become routine to the point that the army decided this year to initiate an intricate plan with the Arab fallahin in order to protect them from settler violence — as if the latter were untamable beasts. After all, it’s always easier to control a Palestinian armed with buckets and plastic bags. The Palestinian can be told at what time to arrive and how long he or she have to harvest. They can be accompanied back to their home, with a short stop to be filmed by the army that “protects” him for the sake of its propaganda.

Perhaps following the soldiers’ heroism, the settlers will cease cutting down trees or stealing olives before the landowners get around to coordinating their harvest times with the army — such as in the case of the village Al-Janiya a week ago.

Let’s assume that the kindheartedness and morality of the Israeli Defense Forces compel it to protect the weak side in this equation — to provide access to the groves and stop violent settlers waiting around the bend. If this is the case, why doesn’t the video show just how the IDF does its job? Or at the very least shows from whom it is protecting the poor Palestinians? Is this not part of the plot? Not a single mention or, God forbid, even a photo of what may happen should the brave soldiers not do their job? Is there a shortage of footage of settlers attacking Palestinians during the olive harvest? Is this what the viewers deserve?

Perhaps, though, this is precisely the image that the most “moral” army in the world — which occupies land and olives, protects settlers from Palestinians and Palestinians from settlers — deserves.