According to Palestinian workers at the West Bank factory, they were provided with meager and unsuitable food at the end of a day of fasting; those who complained were fired immediately. SodaStream: ‘The termination process was done legally’

Wednesday, July 2, was especially tense. The funerals for the three murdered Israeli teenagers, Gilad Shaar, Naftali Fraenkel and Eyal Yifrach had taken place the day before. Gangs of rioters were already roaming the streets of Jerusalem, and Ramadan was entering its third day. It was 8 p.m. and the night shift workers at the SodaStream factory in Mishor Adumim (the industrial zone of the Israeli settlement of Ma’ale Adumim) headed to the dining room for their first meal after 16 hours of fasting.

Ahmed Nasar Al-Adin, a worker in the metal quality assurance department at the factory recounts that “on the first and second day of Ramadan the food was entirely fine,” but that on that night, when the approximately 40 shift workers arrived tired and hungry, they discovered that instead of the five trays of food that were supposed to be in the cafeteria, there were only “two trays, one with a little bit of schnitzel and the other with chicken that was both appalling and insufficient for all the workers.”

They decided to contact the supervisor of the cafeteria, who was absent that night, contrary to the previous days. “We spoke to him and he said that this is what there is. Whoever wants to, will eat; whoever doesn’t, won’t eat. This is what there is.” The workers also turned to the shift supervisor in the factory, who gave them the same answer.

SodaStream is a successful company that is working toward obtaining a significant portion of the global drink market and is trying to brand itself as an ethical and “green” company. At the beginning of the year SodaStream became embroiled in a public scandal when it hired the actress Scarlett Johansson to advertise its brand worldwide, a move that led to criticism against the actress since the company’s factory is located across the Green Line in the West Bank. In response to this criticism, the company repeatedly emphasized that its factory provides jobs for hundreds of Palestinian workers and serves as a locus of coexistence between the two peoples. 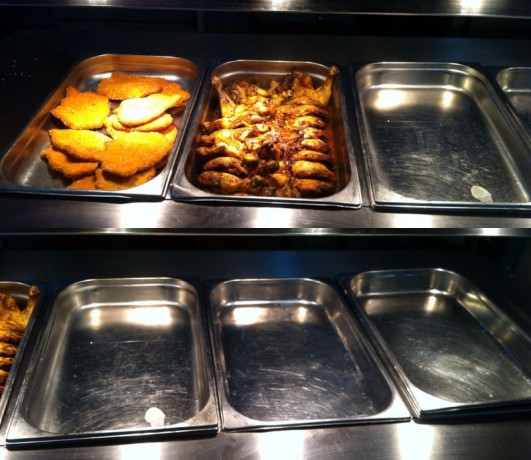 The meal meant for 40 workers to break their Ramadan fast while on shift at the SodaStream factory. (photo: SodaStream workers)

Due to Kosher restrictions, the hundreds of Palestinian workers are forbidden from bringing in food from the outside and are therefore reliant on the food the factory provides. “This was not the first time this has happened on the night shift,” says Al-Adin. “We have discussed this with the management before, but there was no improvement. There were instances of insufficient bread and vegetables, and instances of not enough to drink.”

This time, however, the situation was different, since during Ramadan the workers fast all day and the management is aware of that. A few days before the holiday the management posted a message promising that there would be appropriate food and that workers would be provided with a room to rest in should there be need for it.

The workers tried to reason with the shift supervisor for over an hour. The solution suggested to them was that the workers would eat the packaged meal they get at 3 a.m., an hour before their return to the fast, which includes a box of hummus, sour cream, tuna, and sliced cheese. “I explained to him that we have been fasting for 16 hours and it is unreasonable to expect us to only eat this packaged meal. It’s not enough food for someone who stands and works for 12 hours,” says Al-Adin. At this point it seems that the management lost patience. “The shift and transportation supervisors told us that there is nothing to do at this point and that the shift has been canceled.”

The next morning the workers on that shift received phone calls from the management that notified them of the decision to terminate their contracts because they refused to return to work that evening. “They also claimed we were violent. The factory has cameras documenting every corner. Lets see the tape. What violence are they talking about?” asks Al-Adin.

It seems as if the spirit of coexistence on which the SodaStream factory prides itself was absent among the top management of the company, which entirely ignored its workers. “No one has addressed the workers to this point. Don’t they think we should be heard too?” asks A., who was fired overnight.

A notice to the workers contains claims Al-Adin is referring to. “They hung a notice on the message board,” recounts A., another factory worker. “The night shift workers who came to eat were disappointed by the variety of food served…  and decided on their own that they are unwilling to return to work until other food was served to them,” claimed the notice. “Despite attempts to explain to them that the food is of sufficient quality… the workers decided they are unwilling to return to work and they wish to go home immediately…  it is worth noting that the atmosphere around this entire event was heated and contained hints of violence.” 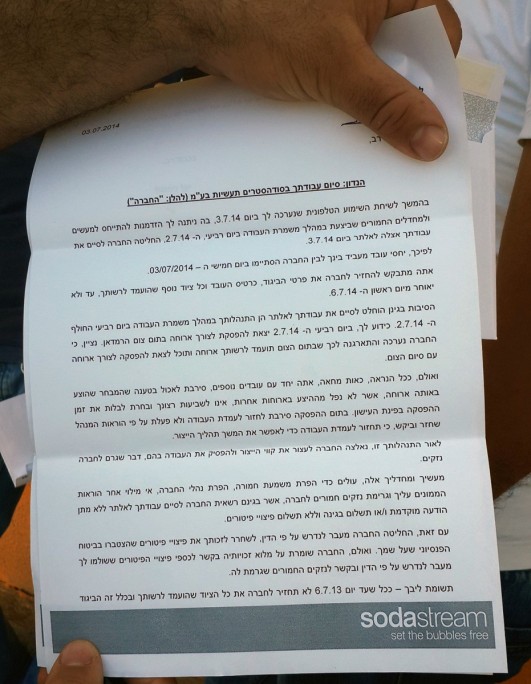 The letter from SodaStream management sent to the employees who were fired overnight (photo: SodaStream workers)

“On the contrary, we told them we do not want to go home,” says Al-Adin, “that in fact we want to return to work. But they sent us home. They told us that the managers would meet tomorrow and would solve this, and that we should sign out and go.”

“We see this incident as very grave… something we cannot allow to become routine and, therefore, all the workers involved have been fired immediately without the usual severance payment,” the management wrote in its notice to the workers. Al-Adin confirms the statement: “The manager who called the fired workers said that the management decided not to have a hearing because of the severity of their act.” What is the basis for the company’s claim that the workers did not want to return to work? “It’s what the night managers said.”

One might guess that even if the actual implementation of “coexistence” is not truly at the top of the list of priorities at SodaStream, their advertising themselves as such is likely not bad for business. In May the company published its forecast for the rest of the year, predicting a 15% increase for 2014, compared with income of $562.7 million in 2013; and a forecast of a 3% increase in profit in 2014, compared with profit of $42 million in 2013.

The factory in Ma’ale Adumim employs about 1,100 people. It seems that there are good reasons why more than 800 of them, the majority of the production line in the different departments, are Palestinian. Whoever wants to work at the factory, which functions 24 hours a day, seven days a week, is required to work 12-hour shifts, including Friday and Saturday. The average worker labors 220-250 hours per month. An assembly line worker averages 23 shekels an hour. Al-Adin, who worked as a quality control technician in the metal department, has a degree in materials science. His wage was 27 shekels an hour.

Several of the workers were relatively new, having been employed for about 10 months. “I worked at the factory for two years and two months but there are also those who worked for 4-5 years and we were fired just like that, with a phone call. They told us not to return, and that we could pick up our termination notice on Sunday,” says Al-Adin. 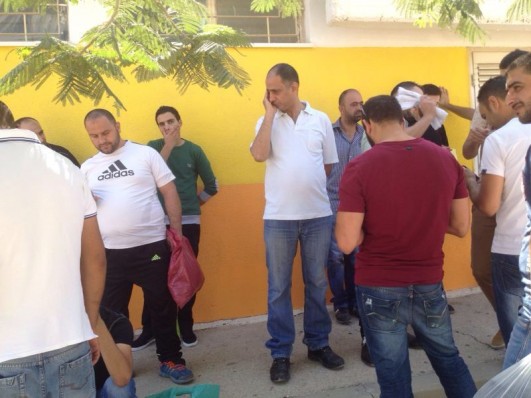 SodaStream employees who were fired overnight wait outside the premises to collect their letters of dismissal and personal belongings. (photo: SodaStream workers)

But the humiliation did not stop there. “When we came to take the termination notices they blocked us from entering the factory, and whoever did get in, finally, was accompanied by guards. We, the ones who did not enter, they broke into our lockers, without any one of us around. This is our privacy here, and they brought our stuff outside.”

In a truly bizarre coincidence, on Friday, two days after these aggressive terminations, the Israeli news website NRG published a special column (Hebrew) entitled “Coexistence: This is How to Make Peace.” The author, who spent time in the company’s “special” cafeteria was impressed that “… one of the only places in Israel in which coexistence, tolerance, and hope, even in these times, is preserved, is in SodaStream’s factory in Ma’ale Adumim.” The company’s profits, its treatment of its workers, and its aggressive terminations somehow went unmentioned.

The Workers Advice Center WAC-MAAN, which represents the fired workers, stated that “If SodaStream does not comply with our demand to return the workers to the factory immediately, MAAN will act in the legal and public arenas to guarantee their rights.”

SodaStream has responded: “The entire termination process was done legally, there was a hearing, and the workers were not deprived of compensation payments. SodaStream treats all its workers with respect, and therefore a special hot meal to break the fast was provided for its Muslim workers. Nevertheless, the workers chose – without relation to the quality of the food or to the quantity of the food – to not enter the cafeteria at all, and afterwards they stopped work on the assembly lines. SodaStream cannot accept a situation in which workers who don’t think the food is appropriate stop work on the assembly lines and manifestly ignore the orders of supervisors.”

The original post was published in Hebrew on the independent news site, The Hottest Place in Hell (Ha-makom)

Get Our Weekly Newsletter
Before you go…
A lot of work goes into creating articles like the one you just read. +972 Magazine is nonprofit journalism, owned by many of our writers, editors, and journalists. In order to safeguard that independent voice, we are proud to count you, our readers, as our most important supporters. With your support, we can keep +972 Magazine a strong, independent, and sustainable force helping push the global discourse on Israel/Palestine.
DONATE
More About Scarlett Johansson 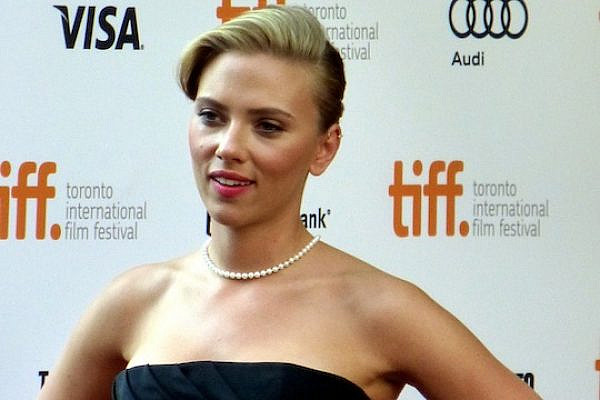 Scarlett Johansson, West Bank workers need a Christmas miracle! [satire]
In the wake of SodaStream’s apparent capitulation to BDS, an open appeal to ScarJo to save yet another group of West Bank workers. (Satire) Text by Ryan Rodrick Beiler/Activestills.org Dear ScarJo, Can I call you ScarJo? It’s been a great year for you: you had a baby, you got married, you turned 30. But I…
By +972 Magazine December 21, 2014 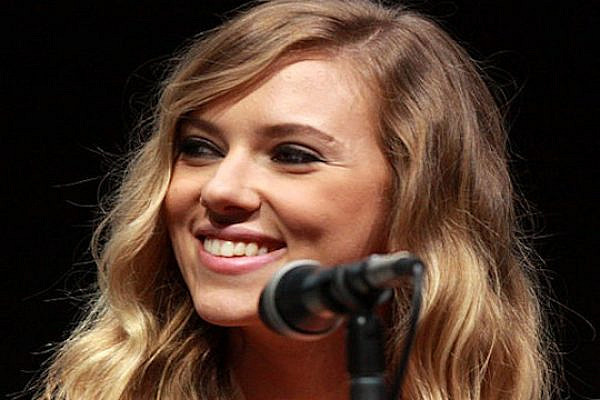 Scarlett Johansson isn’t naive: She prefers profits to human rights
By stating that the illegality of settlements is ‘very easily debatable’ and that there is no ‘right or wrong side,’ the actress has proven she is not naive at all – but is rather choosing money over humanitarian concerns. By default, she is enabling the occupation. In her first explicit response since the Sodastream-Oxfam controversy, actress…
By Mairav Zonszein March 16, 2014 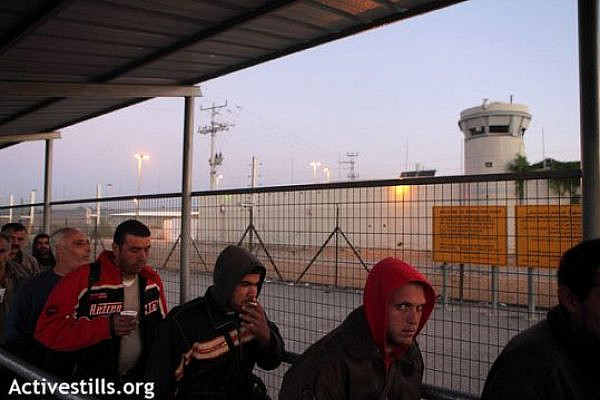 The cynical use of Palestinian workers in the SodaStream controversy
As a rule, Palestinians working for Israelis in the West Bank hate the settlements and the occupation. But they have to feed their families, so they swallow their pride. Supporters of the occupation have found a new set of spokesmen: the Palestinian workers at the West Bank factory owned by the Israeli company SodaStream, of…
By Larry Derfner February 3, 2014