Palestinian citizens of Israel share the same fear of violence as Jews in recent weeks. But many of them don’t find security or comfort in Israel’s police forces, who seem to think that Palestinian citizens should accept that their rights and dignity must be compromised in order to make Jewish citizens feel safer. 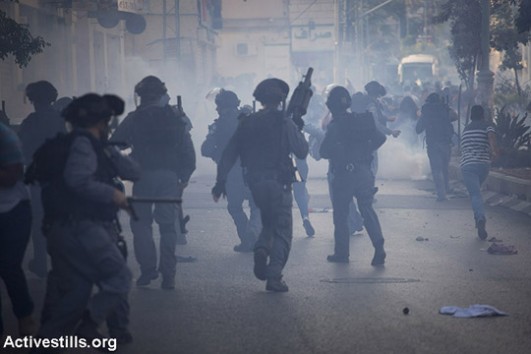 “We are scared to leave the town,” an Arab woman in Tira told me last week. “A man from the neighborhood who works in Ra’anana happened to be walking on the same street where a stabbing attack had just happened. A group of people saw that he was Arab and started yelling and charging towards him. They would have beaten him to death had it not been for a Jewish person nearby who blocked them and told him to run.”

I spoke with an Arab friend later that evening about the incident, and about many similar ones that have been taking place across the country during the past few weeks. I asked him if he would ever consider filing a complaint to the police if he were attacked on the street or harassed at his workplace. “Please,” he replied with a sarcastic grin. “The police aren’t here to protect us; they’re here to protect Jews. When this is the case, there is no safety for us.”

The comment illustrated a troubling aspect of Palestinian life inside Israel. Despite what many Jewish citizens may think, Palestinian citizens share the same fear that has gripped the country since the violence began several weeks ago – sometimes worrying that they too may be stabbed by a Palestinian thinking they were Jews. Many Arab families are starting to avoid going to malls in Jewish towns; some Arab university students are anxious for their safety on campus as the new school year begins; and Arab workers are worried about appearing “suspicious” to onlookers while driving or walking in public. 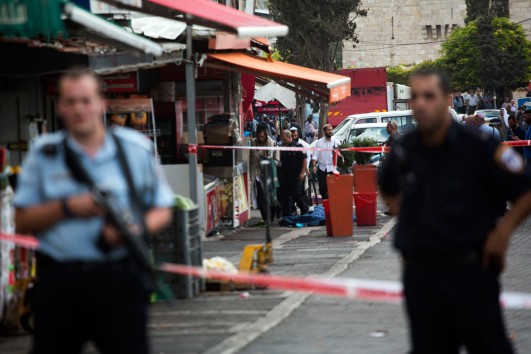 But unlike for most Jewish citizens, Palestinian citizens do not find security or comfort in Israel’s law enforcement authorities. In the weeks since the violence began, police forces have increased their presence at the entrances and exits of Arab communities throughout Israel, creating makeshift checkpoints and pulling over Palestinian citizens for inspection, both young and old, men and women. Arabs in mixed cities like Lyyd (Lod), Jaffa and Acre have also been stopped and searched.

These police methods are a form of racial profiling, and have been longstanding and common practices toward Palestinian citizens during calm and tense times alike. Many Jewish citizens believe this profiling is reasonable or justified as a security measure, given that the “terrorists” being targeted are Palestinians and may be members of or are living among the minority community in Israel. As such, profiling may increase the likelihood that the authorities can catch suspects or possible perpetrators.

The supposed security logic behind racial profiling, however, is primarily a recipe for collective punishment. No consideration is given to the fact that it sweepingly targets 1.7 million people for the crimes of a few dozen; that it imposes serious social and psychological effects on Palestinian civilians both collectively and individually; or that such methods reinforce racist attitudes toward the Palestinian community. If a white American today tried to justify racial profiling of black Americans by arguing that the latter are more prone to crime, they would be lambasted by politicians and the public alike – including by Israelis here. 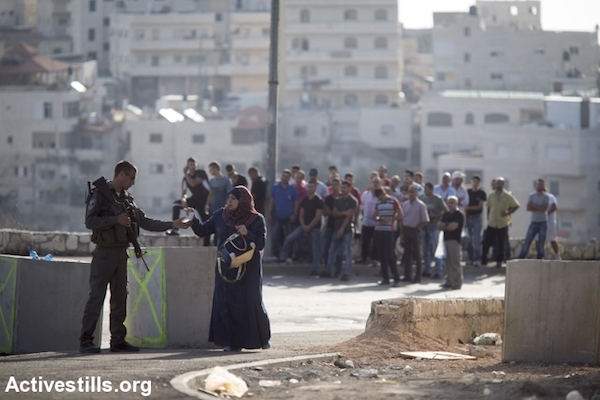 An Israeli Border Police officer stops and inspects Palestinians trying to leave their East Jerusalem neighborhood of Issawiya, October 15, 2015. Police erected checkpoints at the entrances and exits of almost all Palestinian neighborhoods of Jerusalem, a form of collective punishment following a spate of stabbing attacks. (Oren Ziv/Activestills.org)

When it comes to Palestinian citizens, however, such criticisms are ignored under the pretext that Israel’s security situation requires tough policies, including the frequent suspension of Palestinians’ legal rights.

For example, in recent weeks, scores of minors arrested at demonstrations were denied basic protections that are guaranteed to children under the age of 18. Several prominent activists were issued “preventive” arrest warrants for charges that do not exist in Israeli law. Family members of detainees and activists were also arrested without any legal basis or connection to the police’s charges. Adalah, one of the legal centers representing the detainees, stated that the police were essentially “acting above the law, according to their own unauthorized discretion.”

‘His hand was on his gun the entire time’

The police’s routine breach of their own laws and protocols are most starkly reflected in the increasing trigger-proneness of police officers, after government officials ordered a loosening of the rules of engagement for using live fire. Palestinian citizens’ fears particularly heightened after the killing of 19-year-old Fadi Alloun in East Jerusalem, which took place after a right-wing Jewish mob urged police officers to shoot him, despite not posing an immediate threat after an alleged stabbing.

Many now worry that a death sentence at the hands of the authorities is only a small mistake or a few racist chants away. “It’s enough that people yell ‘terrorist, terrorist’ to any Arab citizen walking down the street, and his life is in danger,” said Abed Abu Shehadeh from Jaffa.

One 20-year-old Arab woman similarly described the tension she felt when she was stopped by four policemen on the outskirts of her town while driving to pick up her brother. “It was terrifying. They told me to get out of the car, they looked through my bag and wallet, and called me a liar when I told them I don’t understand Hebrew. One of them was looking at me the entire time with his hand on his gun.”

Human rights groups in Israel have noticed this concerning trend and recently issued a joint statement, demanding an end to the loose rules of engagement. “No one disputes the serious nature of the events of recent days, nor the need to protect the public against stabbing and other attacks. However, it seems that too often, instead of acting in a manner consistent with the nature of each incident, police officers and soldiers are quick to shoot to kill.” The statement added: “Politicians and senior police officers have not only failed to calm the public climate of incitement, but on the contrary have openly called for the extrajudicial killing of suspects.”

‘Tell them that Palestinian lives matter’

These brutal police practices existed long before the events of the past few weeks, and are deeply tied to the dynamics of Israel’s occupation in the Palestinian territories (see +972 Magazine’s special series on the October 2000 events). But they are now being given even more political and public legitimacy by the climate of fear permeating the country. Many Jewish citizens seem to think that Palestinian citizens ought to accept that their rights and their dignity have to be compromised in order to make Jews feel safer, placing blame on the discriminated group rather than the state for their lack of safety and comfort.

While it is right to say that both the state and the Palestinian community have a responsibility to combat the violence and anger that has unfolded, the state remains the most powerful party that holds nearly all the cards and resources to address those issues. Its current approach of racial profiling, suppression, and demonization are not methods to achieve this. They are in fact sustaining the same grievances and alienation that have characterized the minority’s relationship with the state since 1948.

“The Israeli police are not operating as a civic service for the community, but as a security-oriented institution for the state,” says Dr. Thabet Abu Rass, Co-Director of the Abraham Fund. “This is a reason why although we have seen some initiatives for cooperation between the police and local Arab leaders, there is still a great deal of police violence and killings against Arab citizens, especially compared to Jewish citizens.”

Abu Rass identified three paths for changing this: “The police must first transform itself from a security service into a civic one, as demanded by the Arab community. Second, the police must foster better relations with local Arab leaders on the basis of this civic purpose. Third, the police must be more transparent with the Arab public, and work toward putting more investment in investigating complaints by citizens and fighting local Arab crime in cooperation with the community.” 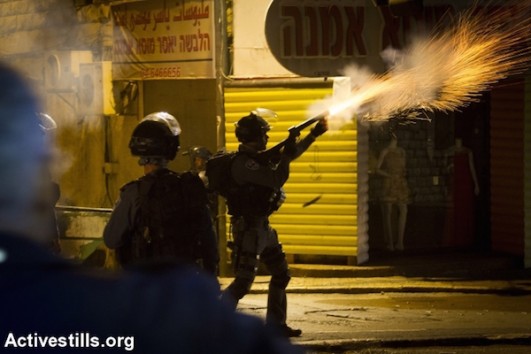 Meanwhile, some Palestinian groups and activists have sought to put their relationship with the police into a comparative perspective, both to make Israelis understand the severity of the problem and to promote solidarity with other discriminated groups.

In January 2015, Palestinians in both Israel and the occupied territories met with a delegation of black activists from Black Lives Matter, Dream Defenders and other social justice groups to learn about each other’s experiences of state violence and minority struggle. Last week, a video by black Americans and Palestinians encapsulated the view of their shared consciousness with the title: “When I See Them, I See Us.”

“Our contexts are different, but I really believe that the nature of our struggles are the same,” one of the activists told me months ago after a discussion on police brutality. I asked him what he thought was the most important thing our community should do to change our situation. He simply replied: “You start by telling them that Palestinian lives matter.”