The Russell Tribunal is meant to expose and provide accountability for human rights abuses committed by Israel against Palestinians. But in privileging ‘expert’ voices over those of the victims, does it actually reinforce dominant power structures? 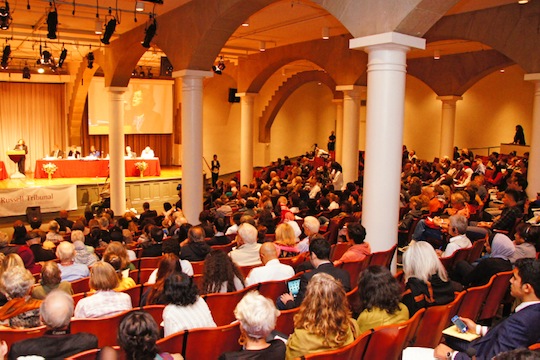 The fourth and final session of the Russell Tribunal on Palestine took place this past weekend in New York City. The tribunal is an “international people’s tribunal created in response to the international community’s inaction regarding Israel’s recognized violations of international law.” Its stated goal is to address the complacency and responsibility of the United States, the United Nations and other international actors in facilitating and enabling Israel’s human rights abuses in Palestine.

Turnout and enthusiasm for the event were high, most likely as a result of the VIP jury lineup, which included U.S. civil rights icon Angela Davis, Roger Waters of Pink Floyd fame and Alice Walker, Pulitzer Prize-winner and subject of recent BDS controversy. The Tribunal, run much like a court, was overseen by a panel of judges that included Dennis Banks, co-founder of American Indian Movement, and former Congresswoman Cynthia McKinney.

The Cooper Union building was full most of the time as journalists poured in and out. The crowed appeared to be mostly white, with spurs of younger activists from NY and the East Coast. Most of the sessions were heavy on the data: going though Israeli and International law conventions and statutes, reviewing the history of Israel/Palestine, the wars and the occupation – but testimony and storytelling from Palestinians were practically absent.

While a Tribunal format, or a “people’s court” is a powerful tool, it is still susceptible to institutional power traps. The 12-person jury was relatively diverse and included several people of color. However, it did not include any Arabs, Muslims, Palestinians, Israelis or other residents of the Middle East, Of the 19 witnesses, only two were Palestinian. And although the jury included people with lifelong experiences pursuing human rights and justice, like Davis and Walker, their role was to listen; their voices were rarely heard. The witnesses, who consisted of scholars, human rights lawyers and former UN officials, set the tone for the proceedings, which was largely legalistic and academic, and felt far removed from daily life in Palestine. Out of 31 voices, jury members and speakers combined, only five were Palestinian.

The problem of representation and voice is acute in this context, and derives from the Tribunal’s focus on international law, leaving most of the airtime to “experts.” The choice of “qualified” speakers is often made based on traditional “professional” credentials. In the Palestine solidarity movement, this problem often arises when seeking experts on international law, or activist voices. As a Jewish citizen of Israel, I am very familiar with this dynamic by which Israeli and/or Jewish voices are sought out in place of Palestinian ones. I have been asked to speak at events on Palestine in which I am expected to speak on behalf of Palestinians. This problem was expressed recently by Jewish-American activist Anna Baltzer, who argued that the favoring of Jewish voices in the American solidarity movement is rooted in racism. She states:

Intentional or not, what happens is that just as we are trying to break down the imbalance of power and privilege in Israel/Palestine, we are recreating the same power imbalance in the U.S. context. We must challenge not only Israel’s abuse of Palestinians but the underlying racism at its core that somehow Jews are more important than Palestinians. We must acknowledge that privileging Jewish American voices rather than featuring and listening to Palestinian voices is rooted in racism.

Even if all of the Palestinians who were invited had been able to participate, they would still have been a small minority of the speakers – five out of 31. If the choice of speakers – which included South African legal expert John Dugard, British barrister Michael Mansfield, Spanish emeritus judge José Antonio Martin Pallin, and French diplomat Stephane Hessel, among others – was based on the desire to provide legitimacy, accuracy, and objectivity by privileging non-Palestinian voices over Palestinian, it reinforces the fallacy that Palestinians cannot be trusted, that they do not tell truth and therefore white, scholarly men are the best figures to educate the public about Palestine.

Throughout the weekend I noted several manifestations of this power dynamic at the podium, with one case standing out as particularly disturbing. During one session, Saleh Abdel-Jawad, one of the two Palestinian witnesses, was verbally attacked by a jury member after making the case against the apartheid analogy. Saleh was the only person on the podium to be attacked in this matter. Was it because of a substantive disagreement with his argument, or did Saleh’s identity also play a part in the aggressive attack?

Of course, this incident is minor in the larger scheme of things, but it highlighted yet again how certain types of people continue to dominate the conversation, granting legitimacy to “acceptable” boundaries of the Palestinian liberation struggle. It is crucial for Palestinian voices and experiences to be at center stage, and for others to simply step aside and find ways to support the work instead of leading it.

Elisha Baskin is a board member of Jewish Voice for Peace and a member of Boycott from Within.