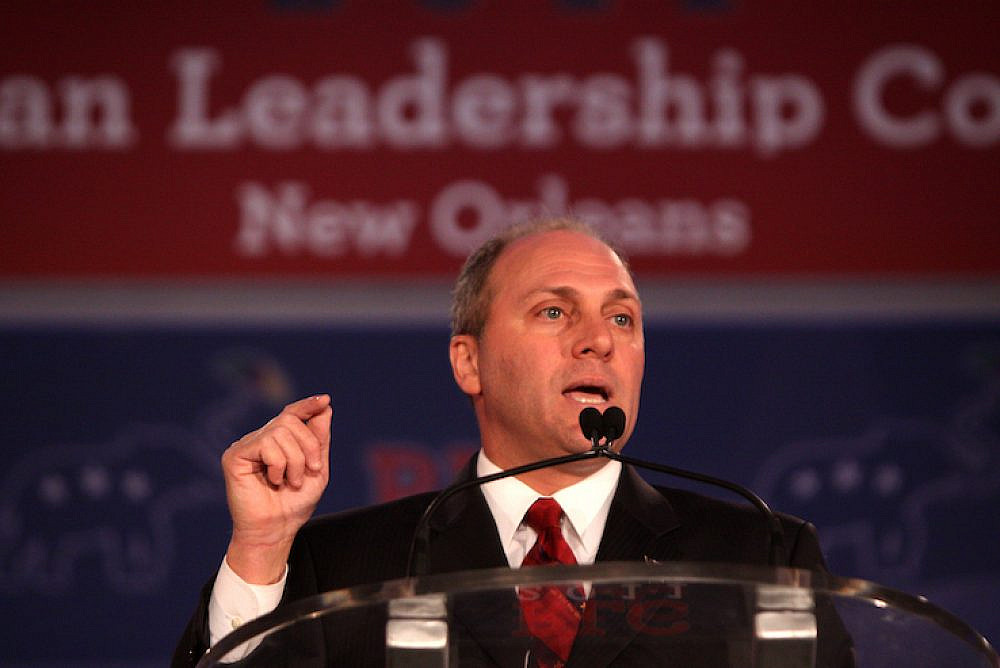 On the first day of Sukkot, I drove an hour across the longest bridge in the U.S. to confront a white nationalist in the Deep South. My friend Elias and I had caught word that Republican Congressman Steve Scalise was hosting a town hall in Mandeville, Louisiana — a once-in-a blue-moon commitment for a congressman who fears protest at any public appearance. We went as young American Jews living full Jewish lives in southeast Louisiana, and as members of IfNotNow, a movement to combat anti-Semitism and transform our community’s support for Israel’s military occupation into a call for freedom and dignity for all.

We knew this would be an opportunity to expose Scalise’s support for Trump’s anti-Semitic incitement, and make it impossible for him to continue hiding his own anti-Semitism behind unquestioning support for Israel. A staunch Trump supporter, Scalise has been part of the Republican leadership for years. As the GOP has descended into a blatant embrace of white nationalism and anti-Semitism, he has largely remained silent — unsurprising given he once called himself “David Duke without the baggage.”

Our decision to challenge Scalise came as part of a campaign IfNotNow is launching to push back on the GOP’s white nationalism. As long as Republican politicians like him continue to actively contribute to their party’s racism and anti-Semitism, young American Jews in every corner of this country will be at their offices, town halls, and fundraisers, demanding teshuva — the traditional Jewish way of repairing harm — and meaningful action.

So we attended Scalise’s town hall to make those demands. Our question was simple: Will you condemn the GOP’s white nationalism and anti-Semitism?

After a short speech, Scalise opened the floor to questions and I immediately raised my hand. I recounted sitting in synagogue on Yom Kippur nearly a year after the Tree of Life synagogue massacre in Pittsburgh, terrified that someone would try to harm my Jewish community. And I noted that the Pittsburgh gunman, along with the recent shooter in Halle, Germany, espoused the same anti-Semitic and white nationalist rhetoric uttered by the GOP on a daily basis.

It didn’t take long for Scalise to cut me off, so I countered with a concrete example of Trump’s recent anti-Semitic comments, in which he called Jewish Democrats like me “disloyal.” Scalise immediately mocked my claim and replied “I don’t know when you had that meeting with him,” pretending to have never heard the “disloyal” comments.

Elias raised his hand shortly after and again asked Scalise to denounce his party’s hate. Scalise doubled down, this time deflecting to his support for the “sovereignty” of the State of Israel. Elias made clear that he was “not Israeli” and that “we’re not talking about Israel,” to which Scalise replied “Neither am I, but I’ve been.”

It was infuriating to hear Scalise brag about his AIPAC trips as a deflection from his party’s white nationalism problem. This phenomenon, of using Israel as a shield to deflect anti-Semitism, not only obfuscates the root of white nationalism — it also asserts the anti-Semitic notion that the interests of American Jews and Israel are one and the same. To see this tactic used in real-time at Scalise’s town hall exposed just how quickly members of the GOP will hide behind their support for Israel, and reaffirmed the urgency of making clear that one can be both pro-Israel and a white nationalist.

Finally, after asking Scalise one last time to condemn the GOP’s white nationalism and anti-Semitism, he suggested that it was us, not him, who should be doing more to call out anti-Semitism. Think about that for a moment: A non-Jewish member of the Republican Party — the party emboldening white nationalists around the world — lecturing two young Jews on what anti-Semitism is and how to fight it.

It’s time to make it clear: Rather than address the hatred within their own party, Republican politicians instead vaguely condemn white nationalism “everywhere,” point the finger at others — almost always progressive women of color — and tout their support for Israel.

As young American Jews, we know exactly who is threatening our community and inciting violence against other minority communities in this country. It’s certainly not inspiring leaders like Ilhan Omar or Rashida Tlaib. Scalise’s failure to condemn anti-Semitism in the GOP and from the President is emblematic of his entire party’s embrace of white nationalists — the same people opening fire on Jews as we pray, attacking mosques across the globe, and setting fire to Black churches here in Louisiana.

So we’re going on offense. Jews, who are far more diverse than the GOP thinks, are fighting for ourselves and for everyone affected by the scourge of white nationalism. Steve Scalise and the Republican Party would rather we be divided from our natural partners: immigrant, Black, Brown and Muslim communities made up of Jews and non-Jews also fighting for their lives.

The GOP’s hate is killing us. Mandeville, Louisiana was just the beginning.

Ezra Oliff-Lieberman is a Jewish educator and organizer based in New Orleans, LA. He loves seltzer, cookbooks, and riding his bike.