White supremacists were carrying out mass murders in America long before Donald Trump was born, and definitely before he ran for president. That doesn’t mean we can let him off the hook. 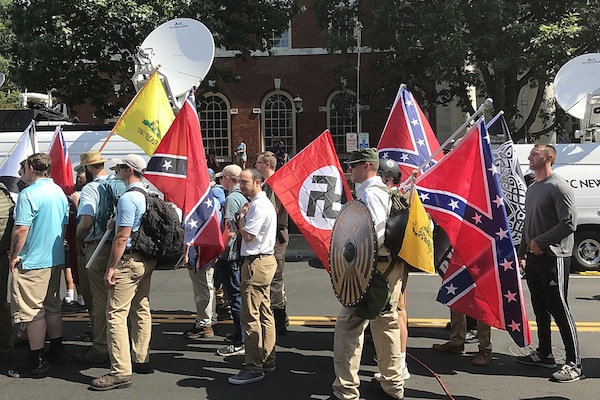 White supremacists and white nationalists are seen with Nazi and Confederate flags before the ‘Unite the Right’ rally, Charlottesville, Virginia, August 12, 2017. (Anthony Crider / CC BY 2.0)

I opened up the Daily Stormer this morning. For whatever reason, probably because it was too hard to think about the actual massacre inside that synagogue in Pittsburgh, I did what journalists and analysts across the globe do when tragedy strikes: I set out to learn more.

What I found were things I already knew but didn’t want to fully believe. Perhaps that is why I navigated to the notorious white supremacist website in the first place — out of guilt for some sort of unwillingness to see clearly and acknowledge what we’ve all known all along.

The article I stumbled into — written by the site’s founder and publisher, who seems to write much of its content — was disturbing but not surprising. (I am deliberately not naming the author nor am I linking to the article because I don’t want to amplify their messaging any more than I already am by writing about them.)

Believe it or not, the article actually decried the murderous attack at the Pittsburgh synagogue on Saturday. Not because the author is opposed to murdering Jews, quite the opposite, but because doing so is not conducive to advancing the cause of white nationalism in the United States at this particular moment.

“[Y]ou’re not going to fight the Jews and overthrow the system with random terrorist attacks,” the prominent white supremacist explained. “The only time any type of violence-oriented political agenda was ever possible, it was in coordination with a legitimate political party.”

“That means that because we do not presently have political organization, we have to be working on that right now, exclusively,” he continued. “Random people shooting random Jews is completely insane, and only puts us in a worse situation. It is a selfish act that can only bring some temporary satisfaction to the individual, who is choosing to put that personal feeling over the wellbeing of our people.”

Firstly, the article can help us understand a broadly glossed-over part of the last social media post made by the murderer, Robert Bowers: “Screw your optics, I’m going in.”

Bowers ostensibly knew that his white nationalist, anti-Semitic, and white supremacist ilk are playing a long-game. He knew that others who share his hateful and murderous ideology are worried about creating a detrimental backlash before the moment is ripe for them to begin implementing their true, grand agenda. He decided to reject that logic and go ahead and murder as many Jews as possible anyway.

Secondly, the passage above sheds some light on the thinking behind the long-game strategy. The United States has a long, long history of white supremacists keeping a low, deceptive profile in order to slowly sneak into enough positions of power to begin implementing their terrifying worldview.

We saw it in the heydays of the Klan. Over a decade ago, the FBI warned that white supremacists were making a concerted effort to infiltrate law enforcement. We’ve heard about the same white supremacists and white nationalists joining the armed forces in order to recruit others and while also getting military training. The 2006 FBI document refers to them as “ghost skins.”

The current mid-term election cycle is making it even harder to ignore how far unabashed racists’ and white nationalists’ attempts to enter politics have come.

Trump and his cronies are absolutely guilty of legitimizing, normalizing, and fueling white supremacy, white nationalism, racism, xenophobia, homophobia, and anti-Semitism, all of which invariably lead to abhorent violence, the likes of which we saw in Pittsburgh this weekend.

We must fight those things, those people, and their ideas as if our societies and our futures depend on it. They do.

Yet it is also important to acknowledge that this is not an issue that began with Trump. There is a danger in placing too much responsibility for these phenomena and this horrid violence on Trump and Co. as if it didn’t exist before them.

The list of horrid acts of violence perpetrated against Jews, Blacks, Muslims, and others was at least as horrid in the years before Donald Trump announced his presidential run. From the Oklahoma City bombing to the Charleston church shooting, the Wisconsin Sikh temple, and the Overland Park JCC, the list goes on and on. Go back a few more decades and the list of victims is unthinkably long.

So no, we can’t let off the hook those who are actively and knowingly fanning the flames of hatred and violence. But our goal should be far more ambitious than to just lower the flames of white supremacism and hatred. This is about way more than Trump, and as much as we’d rather not think about or acknowledge it, the threat is far more sophisticated than Robert Bowers.