Israeli police in the West Bank manage to avoid carrying out the most basic of investigative actions – even while holding in custody two suspects caught red-handed. 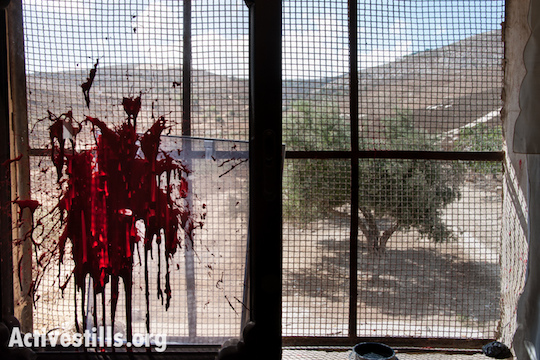 File photo of red paint thrown during an attack by Israeli settlers on a Palestinian home in the West Bank village of Burin, October 9, 2012. (Photo: Ryan Rodrick Beiler/Activestills.org)

On July 26, 2010, Israeli civilians – some of whom were seen coming from the direction of the settlements of Yizhar and Har Bracha – went on two rampages in the Palestinian village of Burin. In the first and more severe case, they attacked and destroyed property; when the owner, Ibrahim ‘Id, could no longer stand watching his property go up in flames and approached the scene, they hit him over the head with an iron bar. ‘Id lost consciousness and had to be treated in a hospital.

During the second rampage, Israeli civilians stoned the nearby home of Bashir Hamza Zaban. Unfortunately for the hoodlums, border policemen were on the scene and spotted them. The cops chased the attackers, detaining two of them. One of the detainees hid a knife in his shoe. The two refused to identify themselves, but later were identified in the police station. The two reserved their right to remain silent during their interrogation. Zaban also managed to identify a third attacker, who – unlike the detainees – was not hooded.

On its face, this is an open and shut case. Yet lo and behold: even though two suspects were arrested, having been caught red-handed; even though one of them was carrying a concealed knife; and even though they refused to identify themselves – the police wouldn’t do even the bare minimum, i.e. ask the victim to identify his attackers. Instead, they closed the case, citing lack of evidence.

Hold on, the epic screw-up of this case is just beginning. Despite the fact that Zaban noted in his statement to the police that he was aware of the attack on ‘Id, and although he gave the police a disc containing photos of the attack on ‘Id, the police took its sweet time and summoned ‘Id for a statement in November of 2010, a mere five months after the incident. After all, we all know that the wintesses’ memories only improve as time passes by.

We’re not done yet: ‘Id, in his statement to the police, noted the existence of the disc, containing quite clear images of the Israeli civilians who attacked him, who can be easily identified. Even so, the police – who had the disc since July – didn’t bother summoning him to a lineup so he could point out his attackers; hence, it naturally did not summon any of them for an interrogation. And to top it all off, the police closed the case in December 2012 – after two years and five months of doing little investigative work – but only bothered to inform us, who represent the victims, in August 2013.

Such phenomenal incompetence, which would not surprise anyone familiar with the SJPD (Samaria and Judea Police Department), generally has two plausible explanations. The first is that the cops and their superiors are complete failures at their duties. The second is that they’re not that dumb, in fact they’re quite smart: we can assume they have a good reason to believe that if they do their jobs properly, they will be harmed. Some of them, after all, live among the population they’re charged with investigating. So they do a half-assed job, ignore evidence, silence nasty questions, and bullshit their way through the closing of a case, hoping no one pays attention.

Such a police force is the hallmark of dark regimes. The SJPD has been functioning this way for years. Anyone who thinks that these investigators, when re-posted within Israel proper, will not retain the work norms developed beyond the separation wall, is deluding herself. As for us, Yesh Din, once we lifted our jaws off the floor, we appealed the decision to close this case. We hope that the embarrassing negligence of the SJPD will force the prosecution to act. We’ll keep you informed.

Related:
While you were sleeping: The systematic terrorization of Burin
‘There is peace here’: Notes from a journey to settler backcountry