This is Israel. These are the people I live with – children who become soldiers, and adults who have been soldiers. I want to see what became of those children, and what happened to make the adults around me who they are. This is a snapshot.

An improvised IDF camp in southern Israel. I drive down to visit my cousin, taking his girlfriend with me, who has come by bus from Jerusalem so I can give her a lift from Tel Aviv. It is 34 degrees Celsius (93 degrees Fahrenheit), hotter in the dusty, beating sun of the south, even at 5:30 p.m.

The camp has the atmosphere of parents’ day at summer camp, or a Scouts retreat. There are clusters of people camped out under scraggly trees and mesh-net green tarps. Soldiers are directing cars of visitors to parking areas linked to each battalion.

Girlfriends kiss boyfriends at length, parents look on adoringly. Ecstatic followers of Rabbi Nachman of Uman park a van blaring techno music, their wild-eyed missionaries shove boxes of popsicles at passing cars, offering them for free. One of them walks among the groups of soldiers in flowing robes, blowing a long, winding shofar. 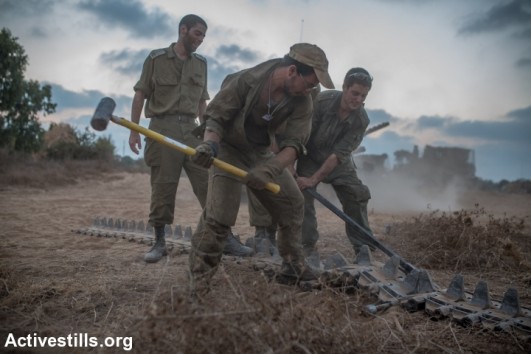 An Israeli tank is seen before entering the Gaza Strip near Israel’s border with the Gaza strip on July 24, 2014 (photo: Activestills)

We ask a few soldiers if anyone knows my cousin, C.

“That one! Sort of blond, always cheerful? Red cheeks?”

“His group is over there.” He points to a clearing with more trees, tarps and clusters of green bodies lying around on black yoga mats.

We pick our way through sleeping soldiers, lounging soldiers, boxes of half-eaten pizza. It could be the morning after a frat party except there are too many parents and no alcohol – one soldier triumphantly pulls an energy drink from a backpack and dangles it in front of the others. The rest are lying among heaps of packs and equipment, communication devices, guns, helmets, baggy helmet netting, boxes of canned food, food in boxes, whole fruit and fruit rinds. Garbage.

We find my cousin but he is in a briefing. We sit down to wait, and two soldiers gallantly offer us black foam yoga mats to sit on instead of the thorny, desert-dry grass and sand. One of them speaks to us carefully in English. I switch to Hebrew, but his Hebrew is not native either, and I ask where he is from. He comes from a country not normally associated with Jews or Israel. What brought him here? He smiles wearily. “Long story.”

Soldiers horse around with each other. They wake up and stretch, showing smooth and adolescent skin underneath wrinkled uniforms. There is a smell of deodorant. Two soldiers are working hard to push a huge piece of equipment into a rucksack, but it sticks way out. By this time my cousin has joined us and I ask what the equipment is. He tells me it is a sniper rifle.

Booms punctuate the air but nobody around me seems to notice. 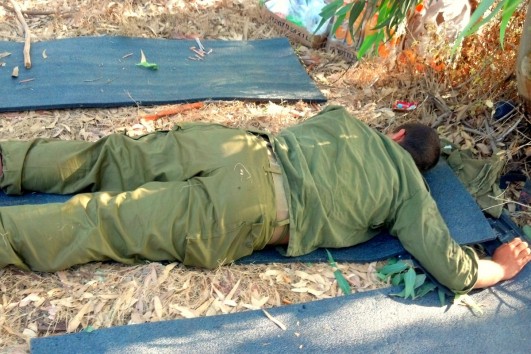 They appear ageless. They look mostly like they are in mandatory service – roughly 18-21 years old – but although I am 20 years beyond that they do not look like babies to me. Yet the older I get, even the MA students I teach look young. These look like men. Why? Is it just the uniforms, and their unshaven chins? It’s their posture, I decide, slightly stooped, shoulders hulking as they walk, arms arched along their sides, not dangling. It is their sleeves rolled up midway to expose meaty forearms, and their stares.

From a small distance, I see one of them flash an angel smile at someone he is talking to, maybe a family member, maybe his mother. Groups of people and things separate us but for a moment his face takes up my frame of vision and in my mind I see that adorable face, in a passport-sized photo in the newspaper with the grainy distance from which I gaze at him now. Sixty-three soldiers have been killed so far.

A group of soldiers sitting in a ragged circle have begun playing guitars, together with a girl wearing a white T-shirt and army pants. They are playing Bob Marley’s “Redemption Song”: “Won’t you help to sing these songs of freedom…” From there, they break into a well-known song by Ahinoam Nini, whose lyrics were written by the Israeli poet Leah Goldberg: Night Psalm.

Nini’s version has a seductive, haunting hand-drum in the background. One of the soldiers leans in toward the girl playing guitar and gets swept up in the song. He closes his eyes and beats the drum rhythm on his Tavor assault rifle.

My cousin and his girlfriend have gone for a walk. One of his friends begins talking to me. He seems to want to tell me everything without telling very much – as if there’s too much to be told. He has been “in,” as they call it, for two weeks, now he is here.

“We are doing a lot of damage there. We may be making it worse. But then you think about it, and one week ago, they were shooting at us.”

He says that the guys talk a lot about Etzel and Lehi, the Jewish pre-state militias. “Hamas, Fatah, the competition between them? It’s exactly the same.” He proudly tells me that this is the most left-wing unit around, and motions to the group of soldiers playing guitars and singing. Then he turns back to me, sullen.

“I want it to be over already. Every day that goes by – I’m different.” Maybe he is worried he won’t be able to go back to who he was. What was that? He looks stuck for words. “I was different.”

Soldiers. Near us one is sitting cross-legged, Indian style. Another one is lying on his back with one knee up, his head in the lap of the first. The one lying down has a deep tan, blue eyes and straight honey-colored hair. They are doing nothing, just staring. The soldier sitting up strokes the hair of the one lying in his lap.