The resignation of the Palestinian Authority’s relatively popular but unsupported Prime Minister Salam Fayyad ends a story of frustration, progress and hope. 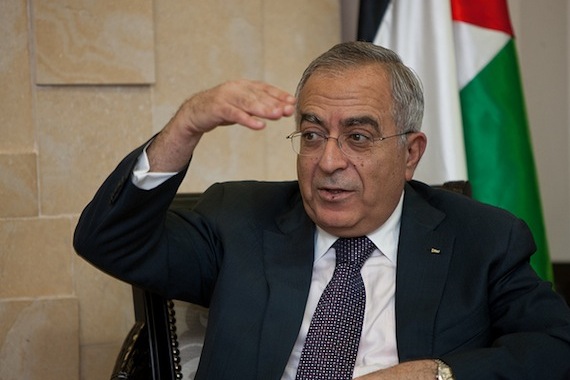 Who killed the prime minister of Palestine? Well, no one killed Salam Fayyad, of course. But the idea of a prime minister of Palestine, the political leader of a someday-democratic state-coming-into being who would lead with cosmopolitan pragmatism, international credibility, and state-building savvy, seems now officially dead. After warnings and false starts, Fayyad has turned in his resignation and it has apparently been accepted by Palestinian Authority President Mahmoud Abbas – according to reports. The resignation was precipitated by a recent financial crisis that has been brewing for months – and years.

Fayyad was appointed prime minister of the Palestinian Authority in 2007 by President Mahmoud Abbas (Abu Mazen). He hails from neither of the two biggest parties, but from Third Way, a small independent party that failed to make serious gains in the last Palestinian elections in 2006.

His position was thus effective only in the West Bank, as Gaza had already fallen under Hamas rule when he took office (he had previously served as finance minister). Yet within constrained circumstances, he developed a political program coherent enough to be nicknamed “Fayyadism.”

Its main components were outlined in an impressively structured political vision called Ending the Occupation, Establishing the State, released in 2009. It involved a state based on 1967 borders, strengthening the institutions and administration within the West Bank to advance economic growth and political legitimacy, and non-violence. The idea was refreshing: stop waiting for moribund peace negotiations, circumvent the recalcitrant Israeli leadership and start building a state. Clean up Palestinian governance and manage Palestinian life in the West Bank to the greatest extent possible until self-governance became a fact on the ground. It was not only a refreshing notion but a reasonable one: constructing administrative statehood and advancing democratic norms despite lack of status has been the strategy of other de facto, unrecognized entities struggling for statehood such as Kosovo, Northern Cyprus, Somaliland, and others.

But few seemed interested – least of all, Israel. In an interview with Roger Cohen of The New York Times in February, Fayyad – not known as a whiner – explained that it was impossible to advance institutional legitimacy of the Palestinian Authority in the face of multiple and expanding Israeli obstacles: ever-growing Israeli control over Area C, withholding duties Israel collects for the PA that made it impossible to pay salaries and settlement expansion that made the idea of a Palestinian state impossible.

But Abu Mazen has also not been supportive, in ways that pre-date the current crisis over economic policy. One analysis essentially accuses the president of drumming up corruption charges against members of Fayyad’s cabinet to distract attention from two of Abbas’ own major policy failures – the first U.N. statehood efforts in September 2011 and Hamas-Fatah reconciliation (still yet to be implemented), and possibly, the author hints, from Abbas’ own unkosher practices.

Needless to say that Hamas positioned itself as the enemy of Fayyad (and Fatah’s) strategy for most of the time it has ruled over Gaza 2007 – opposed as it was to a 1967-based state at all. (Hamas has only recently shown hints of change.) Due to the great split in Palestinian leadership and vision, many Palestinian commentators were skeptical, pessimistic, or derisive of Fayyad’s approach from the start.

But the most problematic element of PA governance over which Fayyad presided was security coordination with Israel, which was supposed to curry Israeli and international favor. That involved counterterrorism activity and many joint operations with Israel to rein in the al-Aqsa Brigade, Islamic Jihad, and Hamas infrastructure in the West Bank, according to this review. This earned him the enmity of many Palestinians and descriptions of a “police state” even as Israel repeated its unbroken, decade-old mantra that it has “no partner.” Netanyahu, wrote Cohen: “has seemed intent on sending this message to Fayyad: Good behavior brings further punishment.”

To be sure, Fayyad is not a thoroughly upright statesman or democratic icon (name a living leader who is). His administration is notorious for its heavy-handed, rights-trampling approach to the security efforts described earlier, and is none too kind to internal criticism.

But it’s easy to forget that many Palestinian people held hopes that he would improve their lives. In a polling roundup in late 2011, I observed that Fayyad had earned a hefty positive rating of 58 percent. Among West Bank respondents living under his government, 45 percent thought he was doing a good job and just 17 percent said he was doing a bad job.

In a March survey by the Jerusalem Media and Communications Center, 72 percent believe that it is necessary to maintain, rather than disband the Palestinian National Authority (the Fatah-led West Bank government). Sixty percent support strikes by PA employees, but nearly 50 percent blame Israel for the crisis to begin with (15 percent blame the PA, and 34 percent blame both – the poll had 1179 respondents and was taken in late March).

The general anger had already led to angry demonstrations against the prime minister last summer. Unlike most politicians, Fayyad frankly admitted that “We have not delivered. I represent the address for failure.”

Calling his resignation a big “blow” to the peace process, as one headline did, is questionable considering there is no peace process to speak of. But in the longer term, the myriad reasons behind his failure were a blow to one of the slim chances Palestinians had of improving their lot.