By publishing false news stories that perfectly align with the government’s agenda, the Israeli media is guilty of sowing violence in a city already on the edge.

“Trying to fan the flames? The Palestinian prime minister went to visit the grave of the terrorist from the [Jerusalem light rail] attack, and then entered a mosque in order to strengthen the ties between the Palestinians in East Jerusalem and the Arabs of Ramallah.”

These words were published by NRG, a website owned by the right-wing, religious Makor Rishon newspaper, which was recently bought out by Sheldon Adelson, earlier this week. The question in NRG’s headline remains unanswered. Who exactly is trying to fan the flames? Palestinian Prime Minister Rami Hamdallah never even visited the grave of the terrorist behind the attack. 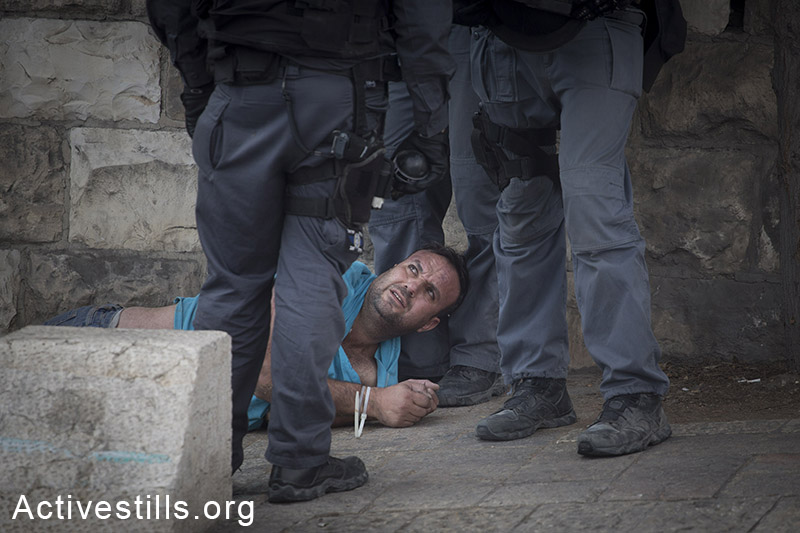 Israeli policemen arrest a Palestinian protester during a protest outside Jerusalem’s old city against the Israeli authorities’ policy in resent weeks to limit access for Muslim worshippers to the al-Aqsa mosque compound, October 15, 2014. At least four protesters were arrested after Israeli police dispersed the protest. Muslim men and women over 50 are allowed to enter the compound in recent weeks, as Jewish right-wing activists enter al-Aqsa mosque compound with police escort. (Activestills.org)

But fanning the flames becomes very easy when public opinion is influenced by disinformation. On Thursday Mahmoud Abbas said that Israel is doing just that through incitement, while the Israelis continue to blame the Palestinians for fanning the flames. So who is really responsible?

The balance between the government and the press is what lies at the heart of democracy. When there is a breach in that balance, the reader can be influenced by certain political agendas. In these cases, one does not receive information which allows him or her to draw conclusions based on the reality on the ground. When disinformation blatantly becomes the headline of a respectable newspaper, the average reader will see it as the truth, when in fact it creates a false consciousness (it must be stated that many readers still think NRG belongs to the Ma’ariv daily newspaper – this is not true). In the wake of recent reports from the ground, and especially since Operation Protective Edge, there is no doubt that the Israeli media must check itself.

Listening to the Palestinian media

If in the past Palestinians listened and watched Israeli media outlets to know what’s happening there, Israelis ought to listen to the Palestinian media to know what’s happening here. Most Israelis do not do that. In reality, using reports from Palestinian news outlets on the events of the war, during the war, is seen by many readers as an act of treason. This despite the fact that there is a big advantage in knowing the ways of the “enemy,” as it is expressed in its own media outlets. This is especially true during war time.

In an era of cooperation between the security establishment, the political establishment and the press, this turns the media into a powerful tool for shaping public opinion. And despite the fact that the digital era has made it possible for people to have access to any subject, the majority of the public still relies on major media outlets. 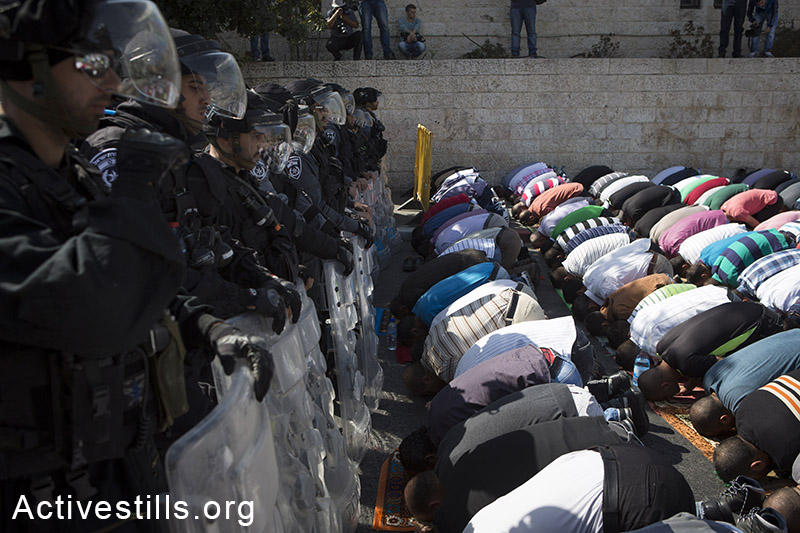 Protective Edge was a new waypoint in the how things were handled between the intelligence agencies, the state, the media and the public – both in Israel and the world. Often times simple facts, pieces of a puzzle that make up the truth, disappeared or were distorted in order to present a picture that served the government’s agenda. For instance, during the war (which was called an “operation” for economic reasons – but especially for reasons of shaping public discourse – in order to insist that we are undertaking an operation to eliminate a “problem”), Israel did not allow journalists to enter Gaza, except for a short period during a ceasefire, in which they were accompanied by the IDF for pre-planned photo ops.

The media’s role in incitement

Today we are witnessing intense confrontations between Palestinians and Israeli forces in East Jerusalem and throughout the West Bank. This, after the media and the police attempted to prevent the publication of reports on the waves of violence taking place over the last several months. Israeli newspapers refrained from reporting on these waves until Israelis were killed in the attack that took the life three-month-old baby and a woman, and wounded seven more at a Jerusalem light rail stop. Only then did reporters begin counting the number of molotov cocktails or the rock throwers. Some of them even decided to declare the “beginning” of the third intifada. And all this while Palestinian media outlets have been tracking and publishing reports on the violence against Palestinians, both by security forces or settlers, which takes place on a regular basis. These waves of violence are given different titles, all of which include the word “intifada”: The Prisoner’s Intifada, the Ramadan Intifada or the Al-Aqsa Intifada. And now we have the Jerusalem Intifada. 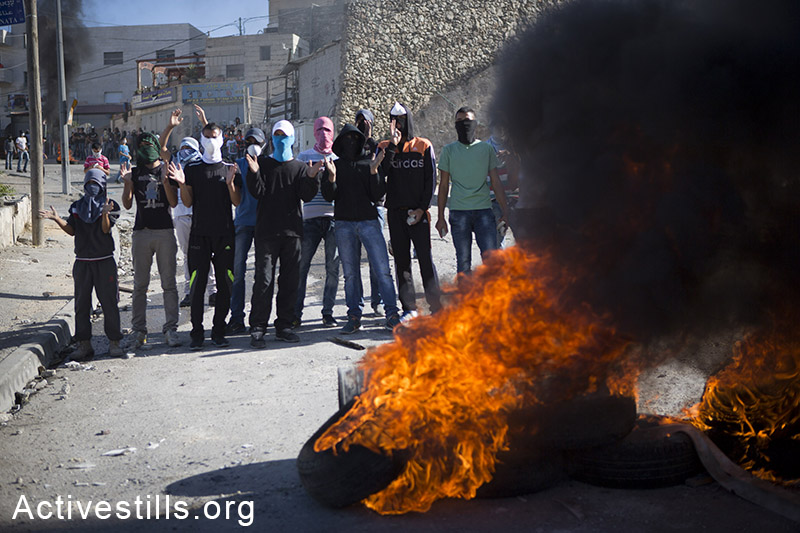 Palestinian youth burn tires during clashes in the neighbourhood of Issawia, East Jerusalem, October 24, 2014. Clashes have continued two days after a Palestinian man drove a car in to a crowd, killing a baby and injuring seven people in Jerusalem. (Activestills.org)

Looking at the Palestinian media, one learns about a continuing intifada that is changing in its intensity and frequency. In Israel, however, these events are not “counted” as a real, third intifada. Let us remember that intifada means uprising. Since the protests in Al-Aqsa two weeks ago, the Israeli media has been reporting on the events in Jerusalem. However, these reports are often biased, lacking and full of disinformation that incites the public.

Assaf Gabor’s piece in NRG, which falsely states that the Palestinian prime minister visited the grave of Abdel Rahman al-Shaludi, who was behind the attack at the Jerusalem light rail, is a prime example of a report that can cause escalation among the Israeli public.

It must be stated that all Palestinians, including Palestinian VIPs, are forced to go through checkpoints when crossing from PA-controlled areas to Israel. Therefore it is obvious that the Palestinian prime minister’s visit in Jerusalem was coordinated with the Israelis. But when the average Israeli, who is not informed on the ins and outs of checkpoints, hears about the visit to the attacker’s grave – which never actually took place – it gives the impression that the Palestinians are free to manage their own affairs, without prior coordination with the Israelis.

Publishing such falsehoods leads to incitement against the Palestinian prime minister, who is turned into someone who supports terrorism and harming innocent lives. This, in turn, leads all Palestinians to be seen as supporters of terror.

Yael Arava is a journalist and documentary filmmaker, and was previously a writer for NRG-Ma’ariv in London. This article was first published on +972′s Hebrew-language sister site, Local Call. Read it in Hebrew here.