Abed al-Harush is the 22nd construction worker killed in a work accident this year. That’s a number you won’t hear in the mainstream Israeli press. 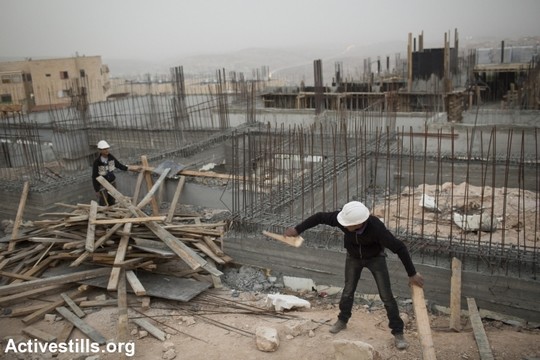 Have you heard of Abed al-Harush from the West Bank city of Yatta?

Probably not. And that’s not your fault. Most of us haven’t heard about him or his death, since it received very little attention in the press. No top headline, despite the fact that he deserved one, considering the way he died.

Al-Harush is the 22nd construction worker who has died in a work accident in 2016. He was killed on Wednesday, July 27 on 1 Popel Street in the city of Rishon LeZion. Warnings about the project’s lack of safety had been previously sounded to the team’s head of safety. For Abed al-Harush it ended with death. He fell from the seventh story after stepping on an improvised surface that collapsed. He didn’t stand a chance.

His death passed without much noise, just like that of 21 other workers who were killed before him this year, and Turkish laborer Younis Uzdamir who was killed this week and another construction worker who was killed this morning. There have been approximately 300 cases of construction worker deaths in the past decade — not including those in the occupied territories, which the head of occupational safety does not include in official reports.

Construction in Israel is a chronicle of a death foretold. Not because the issue of construction does not interest us. On the contrary: we are constantly discussing the housing crisis, the price of housing, and shady real estate deals. But of the enormous cost of human life we do not speak. At least not enough.

It is sad to say it, but it’s easy to just move on from the issue, since most construction workers who are injured or die are not Jewish Israelis — they are usually Arab citizens of Israel, Palestinians from the occupied territories, or foreign workers. They have no voice. No one counts them.

These aren’t localized incidents — this is policy. A policy of ignoring general safety rules, ignoring warnings, enforcement that hardly exists, a failure to take legal steps. When these accidents happen they are not reported, while neither the contractors nor the developers are punished. No fines, no arrests, not even an automatic stop-work order.

The Ministry of Economy’s occupational health and safety administration has 17 supervisors with seven vehicles for a total of 13,000 constructions sites. It can take days before a supervisor arrives at a site where an accident has taken place. What kind of evidence can be gathered so long after the incident?

Over the past eight months, however, we have witnessed a change in awareness on the issue. The dire situation began reaching the public following the thorough, consistent, and determined work of the Coalition Against Construction Accidents. The goal of the coalition is to work to ensure the safety of construction workers through raising awareness and changing the public discourse. The coalition’s Facebook page reports in real time on work accidents through information provided by Magen David Adom, Israel’s national emergency medical, disaster, and ambulance service.

Furthermore the coalition’s work led the Knesset to pass an amendment to a law on Wednesday that would force construction sites to shut down after serious accidents.

After Abed al-Harush’s deal, the residents of the neighborhood in Rishon LeZion, who saw him fall to his death, decided they could no longer be silent. Alongside a group of activists, they organized a protest vigil on Wednesday night — a week after the accident. The event included members of Knesset from across the political spectrum and social activists who are working to change the current reality.

Dr. Ruti Feuchtwanger is an activist focusing on religious-feminism. This article was first published in Hebrew on Local Call. Read it here.