The number of work permits the Israeli army gives to Palestinian workers nearly tripled, a new Bank of Israel report reveals. Did all those people suddenly become less dangerous, or do the permits serve interests other than security?

Palestinian construction workers in an Israeli settlement. The number of Palestinians granted entry permits has tripled in the past seven years, according to a Bank of Israel report. (Photo by Yotam Ronen/Activestills.org)

The normative framework for viewing Israel’s permit regime is that it stems purely from the state’s security needs — a tool that allows the state to differentiate between those Palestinians who threaten Israel’s security, and those who do not.

This notion remains largely unchallenged despite the fact that, time after time, its arbitrariness is made clear: during every Jewish holiday the permits are canceled and a full closure is imposed on the occupied territories. People who are otherwise considered non-threatening workers are jailed for a few days in the West Bank. During every major Muslim holiday, and especially during Eid el-Fitr, all of a sudden the checkpoint gates swing open, allowing thousands of Palestinians to enjoy one day at Al-Aqsa Mosque or at the beach in Tel Aviv. And then they return to their previous classification as “dangerous,” as if they didn’t pose a threat during the holiday. And all that is without even getting into how work permits and medical procedures as a way to extort Palestinians as collaborators — to use Palestinian society against itself.

On Tuesday, the Bank of Israel published statistics on the increasing number of Palestinian workers in Israel. Over the last seven years, the number of workers with permits nearly tripled, while the number of workers who entered the country without permits nearly doubled. What led to the rise in permits? According to the Bank of Israel, the reason is the Israeli government’s decision to increase the size of the construction and agriculture workforce, as well the “relative quiet” in the West Bank.

Furthermore, the fact that Israel has 33,000 Palestinian workers without permits — who likely pass through the incomplete parts of the separation barrier, or jump over it or crawl under it — says something interesting about the way Israel views the security provided by its barrier and permit regime. Just look at how easily tens of thousands of people are able to enter Israel. Just like that.

From the Israeli point of view, it is important to understand how the permit regime serves employers while harming the employees — Palestinians and Israelis alike. Palestinian workers’ dependence on their employers, who can not only fire them but also prevent their entry into Israel or the settlements (where they often work) almost at will, makes it difficult for those workers to demand their rights, leaving their average monthly wages far below the legal minimum, NIS 3,500 a month ($875). Undocumented workers make even less, around NIS 2,700 a month ($675), according to the report. 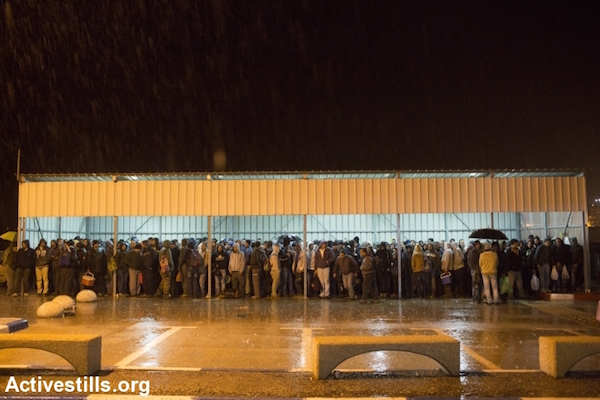 Palestinians holding Israeli work permits take cover from the rain as they wait to cross into Israel before dawn in order to make it to their workplaces, Eyal Checkpoint near Qalqilya, January 4, 2015. (Photo by Oren Ziv/Activestills.org)

And then there are the workers whose employers fire them when they are injured. There are those who try to unionize, against whom employers can use the army, the permit regime and “security” excuses of in order to forbid them from working.

When Palestinian workers are so disempowered, so dependent on the kindness of their employers or the army, and suffer from the sad economic situation of the Palestinian Authority — which Israel is responsible for as the ultimate, sovereign entity in the West Bank — then even the interests of Israeli workers are harmed. Who needs minimum-wage workers when you can use frightened subjects who lack basic rights, wake up every morning at 3 a.m., and have almost no way of protecting themselves?

So is the permit regime really based on security? Today, it seems as if it serves the state as a tool of political pressure, and serves employers as a way to make more money off their workers. The Bank of Israel report demonstrates all of this perfectly. So much for security needs.