Materials about cultural events and health services, and even street signs, are often written in Hebrew and English only, ignoring the 20 percent of Israel’s citizens who are native Arabic speakers. ‘It shouldn’t be this way; Palestinians, as an indigenous national minority, should feel at home in the state that was established on the land we have called home for centuries.’ 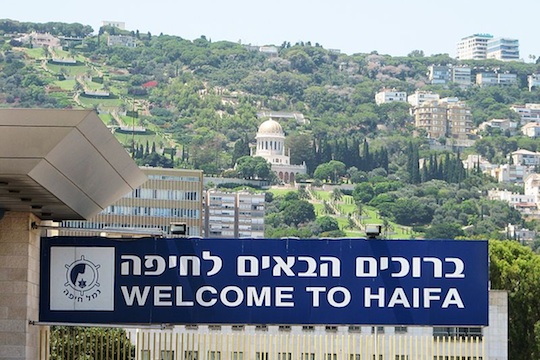 Sign welcomes visitors to Haifa in Hebrew and English only, despite the city’s significant Palestinian Arab population. (Photo: Hanay/CC)

Last week I attended a concert in Acre of Andalusian music performed by a group from Ashkelon. The concert itself was enjoyable but the whole experience left a sour taste in the collective mouth of many Palestinian residents of Akko and the surrounding area who were in attendance. While the concert featured exquisite musical compositions in Hebrew and Arabic, the event was advertised solely in Hebrew.

A reminder: Acre, Akko in Hebrew and Akka in Arabic, is one of the country’s five mixed cities. Thirty percent of its residents are Palestinian Arabs. Yet the vast majority of cultural events are advertised in Hebrew only – completely ignoring the fact that 15,000 Palestinians call this ancient Mediterranean city home. Sadly, this is highly typical of the treatment that Palestinians receive in Israel by the authorities, and only the tip of the iceberg.

Many of the Palestinians in attendance at the concert shared their collective frustration at the fact that the ads placed in their mailboxes by the city were entirely in Hebrew. Many of them nearly dismissed the ads as junk mail and were about to throw them out (because they have become accustomed over the years to being excluded from such events) when the word Andalusian caught their eye. Upon inspection they realized what was being advertised and decided to attend.

The feeling of being ignored by one’s own city, state and ruling majority group can scarcely be put into words. Frustration and anger do not begin to convey the explosive emotional reaction to being sidelined, marginalized and treated as completely transparent. The message that our existence is not worthy of recognition is an extremely dangerous one in the best of circumstances – and we live in a political and social reality that is far from normal.

However, this reality permeates every level of Israeli society: most services are offered in Hebrew, Russian and English – but no Arabic. The website of Egged (the national bus carrier) boasts options in Hebrew, English and Russian, but not Arabic. Israel Railroads calls out the stations in Hebrew and English – but not Arabic. Even road signs boast Hebrew and English in large and legible script while Arabic is crammed in between and in such small script as if it were an afterthought or something embarrassing. Once again, the message that tourists are more worthy of recognition and attention than 20 percent of the country’s population is highly discriminatory, humiliating and quite dangerous.

Even a city like Haifa, which is the self-proclaimed seat of co-existence in Israel and takes every opportunity to boast its uniquely harmonious fabric of Jewish and Palestinian populations living side by side in peace, is guilty of negligence despite the pains it takes to be more inclusive than others. Haifa’s children’s theater festival has for many years been advertised in Hebrew only. When Sikkuy (an organization for the advancement of civic equality in Israel) approached the city through Sikkuy’s Shared Public Space Project regarding advertising the festival in Arabic also, the response was a very ignorant: “But the Arabs don’t come anyway.”

The city’s leadership actually needed to be told that if they wanted Palestinian children to attend they might try reaching out to them in their own language. This, it turns out, was a revolutionary idea, and this from a city that really does make an effort to be inclusive – at least more than others.

The fact that Arabic is (still) an official language in Israel doesn’t even need to be mentioned; I do mention it because we Palestinians often use this argument as we feel it is our last recourse. The state makes it clear that we are not wanted here and the only argument at our disposal, so many of us feel, is the legal one. It shouldn’t be this way; Palestinians, as an indigenous national minority, should feel at home in the state that was established on the land we have called home for centuries. Yet the state continuously makes us feel unwanted. A long list of discriminatory laws makes this feeling inevitable and unavoidable; the latest amendment to the Governance Law and the continued attempts to disqualify Arabic as an official language of the state are only the most recent examples.

My assertion that this trend is dangerous entails no threats. It is simply the expression of the honest fear that continued discrimination and marginalization cannot end well. It requires no genius or sociological scholarship to conclude that long term frustration is a dangerous mechanism – with the potential to make losers of all of us, Jews and Palestinians alike. Absurdly, it seems that many Jews with settler and right-wing affiliations would consider this loss a twisted victory of sorts.

Khalil Mari of Sikkuy: The Association for the Advancement of Civic Equality, is a co-director of the “Equality Zones” project advancing Arab-Jewish municipal cooperation on a regional scale in Israel.