We who are Syria’s neighbors, among whom so many of Syria’s victims have sought shelter, owe it to them — and to ourselves — to speak honestly and without shame about this singularly Arab tragedy. In so doing, we must create space for our Syrian sisters and brothers to lift their voices above those of others. 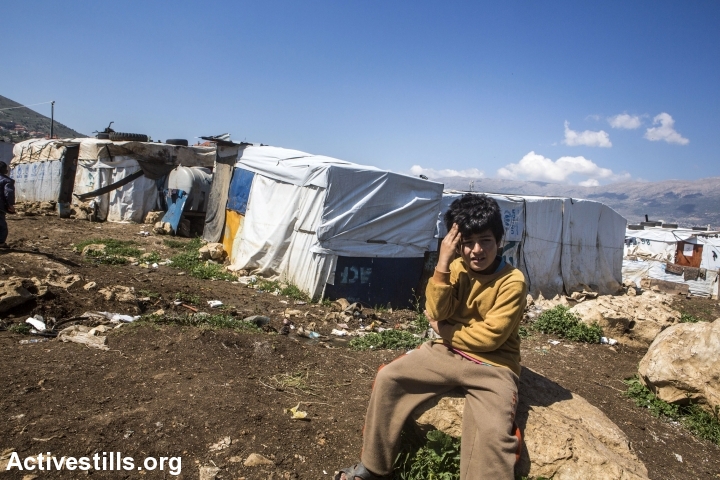 A Syrian child sits near an informal camp for Syrian refugees in the Bekaa Valley, near the village of Jib Janin, eastern Lebanon, April 14, 2016. (Anne Paq/Activestills.org)

Khalil, the produce vendor, is producing a map, on a cardboard scrap, that tells of cherries. Sourced from points north, they are sweeter, he tells me, because they are darker. But I want to know how: how did Syrian cherries end up, fresh and firm, in a closet-sized stall, in a country that is not Syria? This, after all, is Amman in August—in the fifth summer since—and the borders north of here have long since been sealed.

The cherries’ journey is the subject of said map. But almost as soon as he sketches it, the vendor, scrawling beneath a stare, discards it into a cardboard box teeming with husks and wax paper. When I ask him why, he looks puzzled. If he knew the answer to that question, “they” might not have discarded any of it—the Damascene souks, the tells of Aleppo—like so much bruised fruit.

There is a problem here. In ordinary conversations, the people closest to Syria’s tragedy can seem the ones least able to explain it. Ask for an opinion on what caused this mess, and you’re likely to hear something oblique, even evasive. And that evasiveness, with the body count mounting, is making impossible any talk of solutions. Worse, it is leaving the conversation about what comes next to those least invested in the outcome.

The most invested, to be sure, have the most to lose. In Aleppo, for example, where hospitals have been repeatedly and deliberately targeted and more than a hundred children killed since the last week of September, opinions on whether the United States should intervene may differ significantly from those recently put forth by English-language media outlets in the west. And so what if they do? It should go without saying, but let us be clear: if Syria’s citizens hold a different opinion on how best to liberate their children from fear, they need neither the interest nor the imprimatur of western “analysts” in its pursuit. 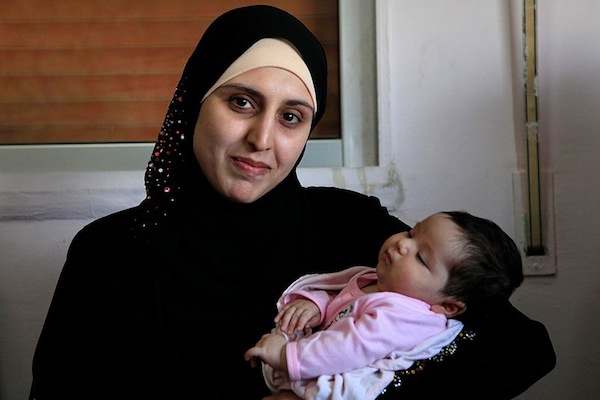 A Syrian refugee woman with her 25-day-old daughter, at an International Rescue Committee (IRC) clinic in Ramtha, near the Zaatari refugee camp in northern Jordan. The baby was born in Jordan after their home was bombed in Syria. (Russell Watkins/Department for International Development)

If anything, the only responsibility of the victimized is to articulate a common platform—clearly, unapologetically, forcefully—to the world. But that articulation need not fall to the victims alone. In fact, history is rife with examples of manifestos born in exile, informed by the interplay of ideas that can exist beyond the immediacy of conflict. Ali Shariati, the Iranian sociologist whose works lent intellectual rigor in an era of early American interventionism, wrote from Paris, where he was involved with the Algerian liberation movement. Antoun Saadeh, founder of the Syrian Social Nationalist Party, launched the “New Syria” newspaper in Brazil.

Though history has rightly tested—and, in some cases, debunked—their ideas in ways they might not have predicted, what these and other thinkers had in common was a “space” within which to develop them and, crucially, an inseverable link—by birth or by patrimony—to the places about which they wrote. Yet with some 25 percent of Syria’s population now refugees, most of its would-be proponents in exile exist in spaces marked by ambivalence or an insouciant sense of fatalism—as if Syria’s undoing were somehow pre-ordained and not the sum of mortal acts.

In Amman, I want to ask the cherry vendor: who are they? Who is responsible for Syria’s ferment? But I can barely think the question before he slips into another kind of evasion—nostalgia. This time, he is recalling daily shipments of fruit from the Syria that once was. The trucks, he says, they would line up, every morning, like the buses downtown. The buses would shuttle people to neighboring Arab capitals; the trucks would carry a taste of Syrian soil…. Syrian soil, he says again, drifting. It’s now the color of cherries. Soiled the color of these damned cherries.

Frustrated, I buy a half-kilo’s worth and make my way home. Home these days is Amman—200 kilometers to Iraq’s Karameh border crossing, half as much to Syria’s Dara’a, half again to Jericho. East, north, and west, this capital city is flanked by impossibility. And if the Middle East’s fires are foreground, Amman is a kind of vanishing point, lending depth to the scene—and a presumed sense of perspective.

But what is this perspective? With Syrian refugees numbering one in five of Jordan’s residents, with Jordanian schools doubling shifts to accommodate hundreds of thousands of Syrian children, with municipal services stretched and the economy straining, surely Amman’s cabs, cafes, and barber shops are stirring with opinions on how to quell the cataclysm next door. All the more because so many here know Syria not in the abstract, but intimately. They used to vacation there, convalesce there, even live there. Many of my own family, for example, are among them. But even they will not indulge me in a conversation about solutions.

Instead, the conversations are timid, as if ensconced in shame. When my father fled Damascus for Amman, he brought with him a five-piece bedroom set, custom-built by a carpenter in Saqba, a town just east of the Syrian capital. Some months later, when the headboard came unhinged, my father couldn’t help but laugh. “Alhamdulillah,” he said to God and me. “It’s under warranty.” 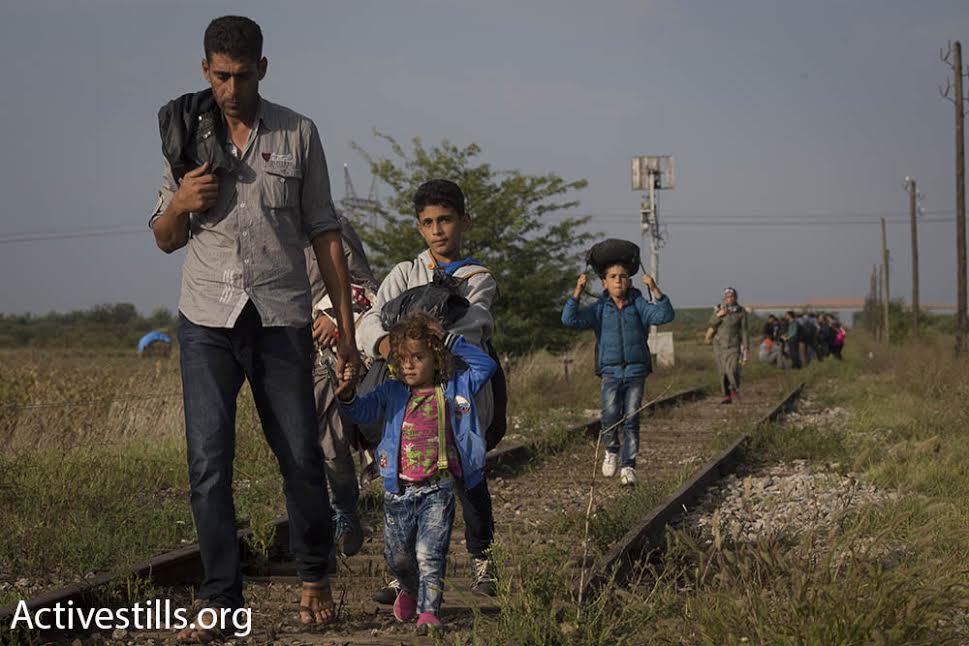 Syria is no punch line, to be sure. But if there is a joke here, it is on us. Most nights, my family and I sit in my father’s living room and watch the horrors unfold, lately from Aleppo. When the broadcast wraps, one of my aunts will shake her head and repeat what has become a familiar Arabic refrain for observers of this slaughter:

“May God curse the one who caused this.”

It is a farcical construct. Have we no opinion on the matter? Does agency belong to God alone, no matter our proximity or our will? Is this fecklessness or fear, this inability to name? I fear we are vendors all, producing packaged phrases to explain away the things we cannot say. We are moved by the killing of children—by the hundreds in Aleppo alone—but unlike, say, Gaza, we seem content to leave Syria bereft of someone or something to blame.

This is a dangerous delusion. If Syria is too complicated to suss, then we have no business being black and white about other calamities, Gaza included. But what applied to Gaza surely applies to Syria all the same: no flag or fight justifies the killing of innocents, especially children. When that principle is muffled by anything else, surely we are all to blame.

Some would say this is illusion, that no principle could make the killing stop, that political solutions alone can blunt the bluster of those who kill. But lasting political solutions are grounded in what is right, not what is expedient. While expediency may be the purview of Western politicians and pundits, we who are Syria’s neighbors, among whom so many of Syria’s victims have sought shelter, owe it to them—and to ourselves—to speak honestly, lucidly, and without shame about this singularly Arab tragedy. And in so doing, we must create space for our Syrian sisters and brothers to lift their voices above the prognostications of others.