The Israeli media has time to talk about Iran, the security budget, and Beit El. That means that when Arab women are murdered, there are always more important issues to cover. 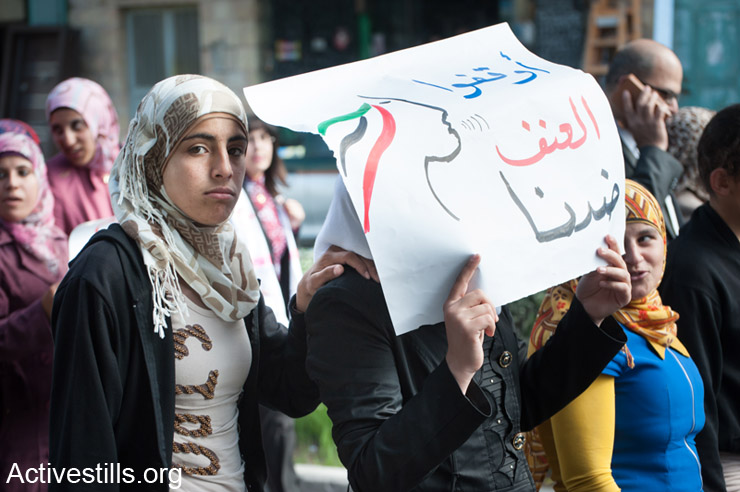 Women from the West Bank city of Bethlehem march to protest honor killings and other forms of violence against women, Bethlehem, November 16, 2013. (photo: Activestills.org)

Six Arab women have been murdered in Israel since the beginning of the year — four of them in the last month alone.

I know that some of you are probably thinking that Arabs are a primitive, violent and shallow people. Well, yes. Unfortunately there are many of those kinds of people in Arab society. These creatures usually come in the form of men. They exist in Hebrew and English versions too. In fact, they exist in any language you choose. So yes, the society I live in includes violent men who view women as property, or as a lowly creature not worthy of rights.

This is the kind of man who murdered Tasnim Abu-Qweider, a mother of two, who was 22 when she died. In the wake of the crime, which took place only several days ago, two more helpless children joined a growing list of orphans in Israel.

Try to imagine two small children in a faraway, unrecognized village in the middle of the desert. They must live in the shadow of violence and shame for the rest of their lives. How much will it take to rehabilitate them?

Not an isolated incident

I walked around with this immense pain for two straight days. The Committee Against the Killing of Women was resurrected in the wake of the murder. A month ago we were half-paralyzed after Raeda Nijim, a teacher and mother of three from the village of Jan, was shot and killed. One journalist angered me after he sent me the following message: “You’re not doing anything about it? You’re afraid because it’s a crime family, right?”

I refused to respond. Beyond issuing a condemnation, we weren’t able to do a thing. The Hebrew media did not mention the murder, and not a single investigative reporter took interest. Nor did anyone talk about it when Raeda’s 20-year-old niece, Liyali Nijim, was murdered a few years ago. We didn’t hear about how she was killed using a weapon that belonged to the Border Police, and it is likely that her aunt, was also murdered by a weapon belonging to the army, due to the family’s connection to the IDF. Perhaps I am just imagining, dreaming, or simply hate the army and the weapons it provides to violent men, and that many weapons can be found here on the black market. A large number of those weapons, however, come from the army.

Several days passed before Na’ama Abu Arar was shot and killed. Everyone was quick to explain that it was part of an ongoing family dispute, as if that somehow makes it okay. The Bedouin began fighting — that’s how it goes. This time I drove to the the Abu Arar home in the Negev village of Arara and spoke to Na’ama’s daughters. They told me about how their mom brought them inside the house during a gun battle in the neighborhood and was hit by a bullet. However, the boy who showed me how to get to the Abu Arar home told me she was murdered by her own family. “Don’t believe them,” he told me. And truly, I believe him. Not a single person asked questions. No one did a thing.

One week later, a brawl in the Bedouin township Rahat turned bloody. A 17-year-old man and a 21-year-old woman paid with their life.

The condemnations were quick to come: the political leadership, the families, the religious leaders — everyone. Everyone announced that they would return the “quiet” to the residents, while telling the police not to interfere too much in the “sector’s” internal issues.

As expected, the Hebrew media was busy talking about the Iran nuclear deal. A closed circle of Israeli talking heads mostly talked among themselves, and no one bothered to let them know that the agreement was signed. They commemorated a decade since the disengagement from Gaza, which refuses to disengage from Israel’s consciousness and budget. They spoke about the natural gas deal that is going nowhere, with long numbers that none of us know how to read. They also spoke about the state’s security budget, which is being boycotted by the defense minister.

Among all these big, important stories, who wants to talk about the murder of a Bedouin women in an unrecognized village?

Women’s organizations in the south, who were shocked and appalled by the murder, decided to organize a protest. But then we received two messages about two different protests. This immediately turned into a big fight on WhatsApp over why we will not join forces, and why two women’s groups in the south cannot stand together in a joint demonstration. Our attempts at organizing a feminist reconciliation led nowhere, so we decided to pretend that having two protests on the same day is a strong show of feminism. Thus, the 30 activists who care about this issue split off into two small, quiet protests in front of the local police station.

I arrived at the protest with a volunteer from a women’s center in Lyd. The American volunteers, who were supposed to widen our ranks, did not receive permission to participate in a demonstration organized by Arab women in the middle of the desert, after it was deemed dangerous for young American women to stand in the sun without sunscreen.

After a police officer told us that he knows well the importance of the basic right to protest, he asked that we don’t stand in the road, since it is a dangerous junction where many have died. I held on to a rope on which we hung the names of all the women who have been murdered over the past five years. Thirty-nine names in total.

One Bedouin man stood with us, and like an Ashkenazi Jewish woman his presence made me so excited. Poor guy. I wanted him to speak on Nazareth’s Radio Ashams, which promised to broadcast the protest as it was happening, although in the end they did not call us on time. It seems that Radio Ashams, too, dedicated its time to very serious matters, wuch as speaking to the Jordanian Waqf about the clashes at Al-Aqsa Mosque. They therefore did not have time to get to our protest. The disappointed women (and the one man) called it quits after an hour-and-a-half in the southern heat. A young man who stepped out of a car at the station joined the protest for a few minutes. “I’m rushing to the bus,” he said, “but I’m with you.” He is also tired of these murders. 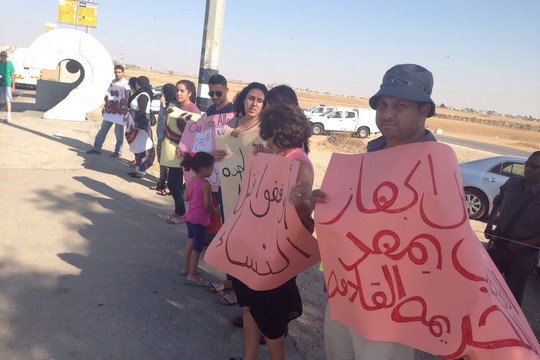 Arab women, and one man, protest against the murder of Arab women, outside a a police station in southern Israel. (photo: Samah Salaime)

The policemen stood helplessly across from us, and mostly just filmed the demonstration. One of them momentarily joined the protest, only to take a “selfie” with us. I took a photo of the Border Policemen who were standing just beyond the rope. Raeda Nijim’s name could be seen in the frame; after all, a Border Policeman is said to have been involved in her murder. The irony of it all makes it hard for me to breathe. I smiled while looking at the photograph, and one of the demonstrators told me, “Look, now you have something to write about.”

The following day, Jack Khoury from Radio Ashams compensated us by interviewing our male hero about the protest. Army Radio journalists drove me crazy as they tried to put together a story, which filled me with relief, now that we can finally speak about this matter in Hebrew. I holed myself up in a quiet room and waited for the phone to ring. Two hours later, the investigative journalist called and told me that the demolition of two buildings in Beit El have taken over the daily agenda, and promised to bring up the topic in the future.

“After the next murder, inshallah, don’t worry,” I told myself.