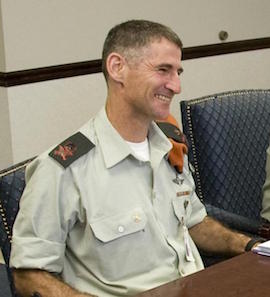 IDF Deputy Chief of Staff Yair Golan raised a small storm when he said at a Holocaust Remembrance Day ceremony Wednesday evening:  “If there’s something that frightens me about Holocaust remembrance it’s the recognition of the revolting processes that occurred in Europe in general, and particularly in Germany, back then – 70, 80 and 90 years ago – and finding signs of them here among us today in 2016.”

A few weeks earlier, MK Haneen Zoabi said in response to an invitation to attend a Holocaust Remembrance Day ceremony: “How can you teach the lessons of the Holocaust when you don’t discern the frightening similarity between what is happening today all around us and what happened in Germany in the 1930s?”

The first, a Jewish man in uniform, was officially recognized as a brave hero in my Facebook feed full of left-wing Israelis. The other, a female Palestinian Knesset member, was at best ignored, but more commonly, my feed joined the chorus of public criticism against her.

There is something brave in saying such things while wearing a uniform, that’s for sure. But to say the same thing as a representative of an oppressed minority who is forced to fight again and again for her very right to speak and act in the public sphere requires no small valor. Perhaps it requires even more bravery than saying them in a position of power granted by a position and uniform.