“The Arabs started the war” has been a long-standing Israeli argument against the commemoration and amendment of the wrongs of the Nakba. But the truth is that the Nakba is what happened during and after the war – not how it began. 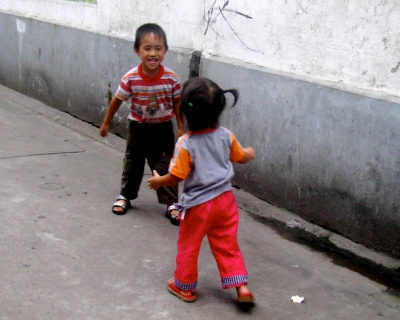 This really isn't a "who started" kinda fight. Photo by Claud334/Flickr

Shlomo Avineri has an op-ed in Haaretz this weekend, rather misleadingly proclaiming that “The truth should be taught about 1948.” The gist can be summed up in two words, “they started,” but for fairness’ sake, here are the arguments Avineri presents in support of this contention:

On September 1, 1939, Nazi Germany invaded Poland. That is truth, not narrative. On December 7, 1941, Japanese planes attacked and destroyed the U.S. Pacific Fleet at Pearl Harbor. That is truth, not narrative…  Not every claim in the German narrative [of territorial claims against Poland] was baseless, but the factual truth is clear: On September 1, 1939, it was Germany that attacked Poland, not Poland that attacked Germany… It’s impossible to ignore the fact that the American and British attitude contained a whiff of white racism against the rising “yellow” power in East Asia. But the truth is that on December 7, 1941, it was Japan that attacked the U.S., not the U.S. that attacked Japan.

Alongside the Israeli-Zionist claims regarding the Jewish people’s connection to its historic homeland and the Jews’ miserable situation, there are Palestinian claims that regard the Jews as a religious group only and Zionism as an imperialist movement. But above and beyond these claims is the simple fact – and it is a fact, not a “narrative” – that in 1947, the Zionist movement accepted the United Nations partition plan, whereas the Arab side rejected it and went to war against it. A decision to go to war has consequences, just as it did in 1939 or 1941.

And so on, and so forth. The problem with Avineri’s answer to the question of “who’s to blame for the beginning of the war in 1948” is that politically speaking, the question itself is no longer relevant. The Israelis will forever claim that “the Arabs” stupidly rejected the partition plan and went to war because they couldn’t suffer to yield one small corner of the Middle East to a non-Arab nation. The Palestinians and many Arab states will reply that the partition plan was perverse from the start, allocating less than a fifth of the population about 50 percent of the land. As for the war itself, they’ll say the casus beli was the Nakba, which already began its relentless advance in the “phony war” prior to the actual five-armies incursion. (As a side note, this was indeed the official pretext, but I hope readers forgive me if I don’t take much stock in the claim.  The notion the same Arab states that abused and disenfranchised the Palestinian refugees for sixty-three years once cared about the same people so much that they ever so selflessly intervened seems absolutely bizarre. To my mind, the motives for their invasion were considerably more banal than humane. )

But what caused the war isn’t and has never been the true challenge of the Nakba. The true challenge is what happened after the war was caused. Even if we accept Avineri’s argument that “they started”, it’s still unclear why Israel had to expel neighborhoods, towns and villages; and if, somehow, we accepted that, it’s very unclear why this had to be accompanied by massacres; and even if we accept (heaven forbids) that massacres and expulsions happen in wars, no amount of “they started” can excuse the still-standing ban on the refugees and survivors to return. In other words, if someone picks a fight with my on my street, and I proceed to not only soundly beat him but to burn his house, kill and expel his family, and then his banish all his neighbors neighborhood, taking over their properties and violently preventing them from coming back, “who started” will need to be reported in the newspapers, but will form a very weak defense in any court.

The numerous historical parallels Avineri uses to reinforce his argument, then, do little other than assist him to drag the coach before the horses. The issue here is not how the Germans justified the invasion of Poland, or how the Japanese claimed the American refusal to negotiate the embargo was a cause for war before they bombed Pearl Harbor. In the case of Israel-Palestine, the question is what happened after the dice for war was cast. If, after all responded to Pearl Harbor by occupying almost 80 percent of Japan, violently expelling two-thirds of the Japanese population and subjecting the remaining third to 20 years of military rule; and then occupied the rest of Japan and engaged in 43 years of occupation and colonization – the status of Pearl Harbor in history would’ve been quite different: An important, even pivotal development, but not really what the major unresolved wrong of the conflict is about.