Israeli police’s failure to stop the murder of two young Bedouin sisters highlights the arbitrariness of citizenship and discrimination for Palestinians under occupation – regardless of whether they are citizens. 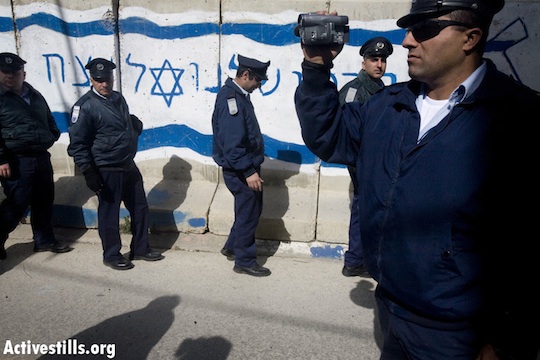 Israeli police [illustrative photo] (Oren Ziv/Activestills.org)
Abir Dandis, the mother of the two girls found dead in an unrecognized Bedouin village in southern Israel last Tuesday, is not an Israeli citizen. In a more perfect world, her citizenship status wouldn’t matter, considering she is in an abusive relationship and her daughters’ lives were in imminent danger.

But the Israel Police were well aware of her citizenship status when she went to alert them of her concerns for her daughters’ safety and begged them for help, just one day before the two girls were killed. As Dandis told the press, Israeli police ignored her repeated complaints in both the Arad and Ma’ale Adumim stations, because she is Palestinian. This is likely why they didn’t feel responsible for acting on her complaints, and instead referred her to the Palestinian Civil Affairs Coordination and Liaison Committee.

Dandis is from Al-Azaria, a town east of Jerusalem in Area B of the West Bank. Area B is under Palestinian civil authority and Israeli security authority, so the Israel Police are in fact responsible for acting there. Furthermore, the girls’ father, who is the prime suspect in their murder, is an Israeli citizen. On top of that, the crime itself took place inside Israel, so any way you look at it, the Israel Police appears to be responsible – and this is likely why the senior officers involved were almost immediately dismissed. Unfortunately, the fact that police are now assuming responsibility cannot bring the girls back.

This horrible murder is a prime example of how efforts to seek refuge from domestic violence can become entangled and entirely dependent on the fuzzy and Kafkaesque guidelines of the Israeli-Palestinian conflict.

Under any reasonable norms, anyone living under Israeli rule should be able to seek protection from the police regardless of their citizenship or residency status. But as Amira Hass points out today in Haaretz, Dandis found herself in the “legal-bureaucratic maze created by the Oslo Accords.” It is a system in which Palestinian police are barred from taking action against Israeli civilians and Israeli police are less than eager to deal with internal Palestinian crime – even in areas under their direct jurisdiction.

Liberal Israelis often argue that Palestinian citizens of Israel – who are discriminated against in nearly all aspects of civilian life because they are not Jews – deserve to be treated equally because they hold citizenship. But is that really possible in a place where nearly all aspects of life are determined by the national security interests of Israeli Jews alone?

Examples of discrimination against non-Jews are abundant on both sides of the Green Line. In the West Bank, Israeli security forces regularly refuse and fail to protect Palestinians from settler violence. Inside Israel, the government is pushing forward plans to displace its own Bedouin citizens so that Jewish settlements can be erected on the remnants of their villages.

In that context of the reality of Israeli rule, the murder of Dandis’s daughters – and the Israeli police’s failure to stop it – highlights the way the Jewish state has succeeded in compartmentalizing control over West Bank Palestinians. Israel has taken all the power over land and resources but almost none of the responsibility for protecting the people there. This is essentially a de facto definition of Israeli occupation.

And after all, doesn’t Abir Dandis deserve to be treated with respect and dignity by Israeli authorities that have direct control over her life, even though she is not a citizen? This is why international law stipulates that the occupying force must protect the occupied population.

In its Basic Laws, Israel defines itself as a Jewish state. The current Knesset is even debating a new law that would prioritize Israel’s Jewish character over its democratic one. When the state actively defines itself as belonging to one people, and not all its citizens, it should come as no surprise that Israeli authorities do not feel responsible for protecting Palestinians, regardless of whether they are citizens.