Reported incidents of sexual harassment, assault and rape by high-ranking Israeli officials are flooding their way into the media. Why is the violation of women’s bodies and dignity so endemic in Israeli society? 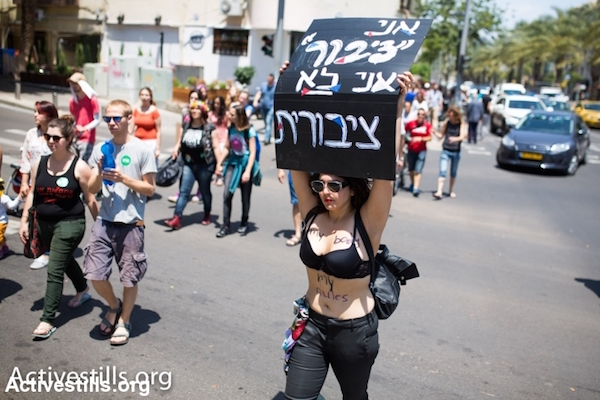 A woman with “my body, my rules” written on her at the SlutWalk against sexism in Tel Aviv, May 9, 2014. SlutWalks have been held in cities across the world as a symbol of defiance against sexism and sexual violence. (Yotam Ronen/Activestills.org)

Several days ago a story broke in Israel that has been dominating the headlines ever since: a senior Israeli army officer has been suspended from his duties after coming under suspicion of having sexually assaulted a female soldier under his command.

Ofek Buchris, whose name was originally under gag order, is suspected of five counts of assault, including rape. And as a high-ranking official in the most trusted institution in the country, his alleged transgressions have provoked outrage, bewilderment, and outright denial.

Buchris is the latest in a recent string of high-profile men in Israel to come under suspicion of sexually assaulting or harassing women. The IDF is currently faced with another two ongoing sexual harassment cases involving officers, according to Israeli news site Ynet, and in 2015, 12 separate cases of suspected rape were reported. According to military police, there were 125 incidents of suspected sexual assault or harassment in the army throughout last year. A report from 2013 showed that one in eight women in the IDF were sexually assaulted that year.

It’s not just in the army. At the end of last year, former interior minister and deputy prime minister Silvan Shalom and former Jewish Home MK Yinon Magal resigned within weeks of one another following a string of complaints from former female employees that they were sexually assaulted and harassed by the two men while working under them.

Also at the end of 2015, a senior Israeli police officer was accused of sexual harassment by two separate women (although then-Attorney General Yehuda Weinstein decided to close the file on the incidents). In January of this year, Ashkelon Mayor Itamar Shimoni was arrested on suspicion of rape and using bribe money to buy the silence of the women he had allegedly assaulted.

It is important to note that this flurry of cases — and these are by no means all the stories that have made the press in the last year — are not necessarily evidence of an increase in sexual assault and harassment, but potentially a sign that more women are coming forward and finally revealing how systematic the abuse is. The case that seems to have precipitated this is that of May Fatal, a female soldier who filed a complaint against her superior officer for sexual harassment and then went public in protest at the lenient plea bargain reached in military court. 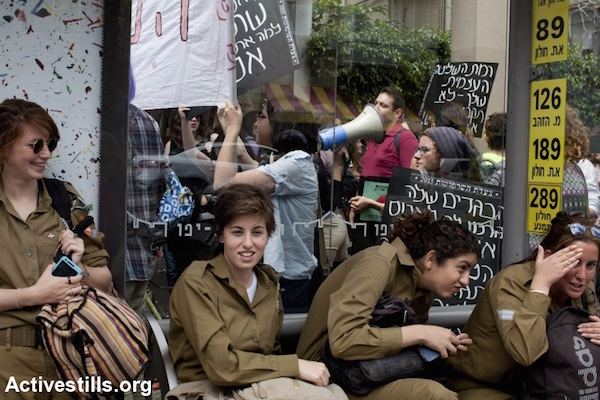 Soldiers watch the Slut Walk rally from a cafe, Tel Aviv, Israel, April 5, 2013. Protesters shouted slogans condemning discrimination against women based on their choice of dress or appearance. (Keren Manor/Activestills.org)

While we shouldn’t kid ourselves that sexism and sexual harassment are not fundamental societal flaws in the rest of the world, there is nonetheless something behind the regularity of incidents in Israel — and the fact that senior officials find themselves consistently embroiled in them — that merits consideration.

It is no secret that Israeli society is a deeply militarized one. The IDF is Israel’s heart and soul, and much of its body. The majority of Jewish Israeli citizens have been or will be a soldier.

Given the IDF’s perceived moral and practical standing in Israel, its former high-ranking officers are frequently parachuted into top-level positions elsewhere. The prevalence of ex-military men in the government is a known phenomenon, but they are also “re-drafted” into high-tech companies, banks and even schools and other educational institutions. The perceived wisdom is that these are trustworthy men — the kind of men you listen to.

That’s an awful lot of men in positions of considerable authority that have graduated from an inherently patriarchal and hierarchical institution — as any army is — and are used to giving orders and having them obeyed. In other words, making demands of people that aren’t in a position to say “no” (from the perspective of the one making the demand). That, coupled with the implicit trust in the veteran military authority figure, is a dangerous combination.

Those that leapt to Buchris’ defense demonstrate this attitude to the full. “[T]here is no officer who embodies the IDF moral code better than him,” one officer said. “We are talking about a moral man, really dedicated to his service… He cared about [female soldiers under his command] like a father.” That last bit is particularly telling — it sets up a paternalistic dynamic in which the woman is unequal, a creature to be protected by a trustworthy man. By a man that you listen to.

Moreover, as with any institution that concentrates huge authority within the hands of a very few, the army in Israel invites hushing and looking the other way when it comes to the transgressions of its power-holders. It does so because its ability to operate in the way that it does — with a given command being, in all but the most exceptional cases, the final word — is dependent on that authority remaining unquestioned.

And finally there is the occupation. For nearly 50 years, Israelis have lived with the example that one’s desire for something is worth more than what — or whom — may be harmed in the quest to pursue it. The idea that something is there for the taking simply because one covets it is toxic, contagious, and under Israel’s current leadership, only becoming more entrenched.