With more and more people on both sides of the aisle pushing back against Netanyahu’s planned speech, the Obama administration — through congressional Democrats — has an opportunity to reinforce its Iran policy without any pushback from the Israel Lobby. 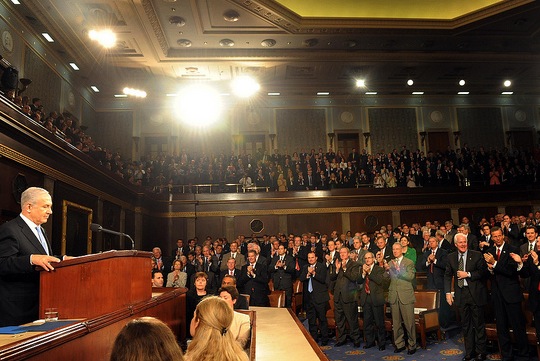 The pushback against Israeli Prime Minister Netanyahu’s scheduled address to a joint session of Congress on March 3 just keeps snowballing. U.S. Vice President Joe Biden confirmed Friday that he will not be attending. That is a big deal considering his historically strong support for Israel and that since 2009 he has only missed one joint session of Congress. In addition, three senior Democratic congresspeople have announced they will be absent, House Minority Leader Nancy Pelosi has indicated that other Democrats may not attend. Pelosi herself reportedly said that she “hope[s] the event will not take place.”

Within the American Jewish community, Anti-Defamation League head Abe Foxman on Friday explicitly called on Netanyahu to cancel his speech. Foxman’s statement is noteworthy because it goes even farther than the position of more progressive J Street, which has only called for Netanyahu to postpone the speech until after Israeli elections two weeks later. (AIPAC, expectedly, is encouraging everyone in Congress to attend the speech.)

Considering all the backlash, which has also come from many conservatives, some are now speculating as to whether Netanyahu might find some excuse to cancel the contentious appearance in Washington. The prime minister and Israeli Ambassador Ron Dermer have certainly not made any indications in that direction, although Deputy Foreign Minister Tzachi Hanegbi on Friday did tell the press that Netanyahu was apparently misled by Boehner into thinking the invitation had bipartisan support.

I am not interested in predicting whether Netanyahu will change his plans. But if the Democrats are unable to rally together behind an unequivocal demand for at least delaying the speech, if not canceling it, then this story will go down in the history of U.S.-Israel relations as unusually illustrative of the problematically dominant role Israel plays in the formulation of U.S. foreign policy.

What is unique about this incident is the circumstantial ease with which Democrats could come out against the speech without being smeared as anti-Israel. Netanyahu’s plan is in many ways unprecedented.

James Fallow writes in The Atlantic:

No foreign leader, ever, has done what Netanyahu is preparing to do: criticize the existing foreign policy of the U.S. government before a joint meeting of Congress. There has been no explicit rule against outside leaders doing so. No one has thought to try.

Many people may not be surprised because they have become accustomed to Netanyahu’s audacity and arrogance, but it is in fact a highly irregular, unusual event in American politics.

Secondly, because in this instance the speech was concocted in breach of protocol by Republican Speaker of the House John Boehner, Democrats could easily focus their anger at on Boehner and not at Netanyahu or Israel. There is a letter circulating among Democrats calling for postponement, but it is not yet clear how many will sign. As Greg Sergant wrote in the Washington Post, this is quite telling:

Given that polls have shown solid majority support for the general idea of lifting sanctions in exchange for Iran restricting its nuke program, the fact that those things are seen as breakthroughs only illustrates just how slow and difficult it has been to carve out a political space where Congressional Democrats don’t feel the need to be 100 percent aligned with Israel at all times.

This ordeal is forcing Democrats to explicitly choose between showing unconditional support for Israel (specifically Netanyahu) and supporting their party, president and policies. It seems like a no-brainer, in some ways even a blessing in disguise.

There are only two issues on which the current American administration and Israel don’t see eye to eye: Iran and the peace process and Israeli settlement activity.

If the debacle surrounding this speech enables the Obama administration — via congressional Democrats — to stand up to Netanyahu on Iran without pushback from the Israel Lobby, then maybe, just maybe, there’s a chance it will set the precedent for confronting him on settlements and peace.