Ten years after it ended, most of the details of a secret trial that tested anthrax vaccines on Israeli soldiers remain unknown. Who was really behind the experiments, and were they even needed at all? 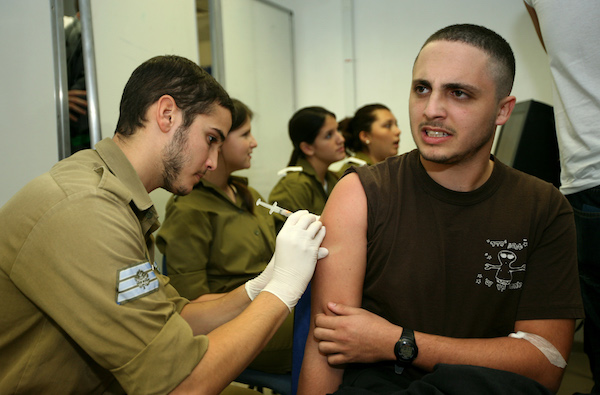 A hit TV show, “Taagad,” recently came to the end of its run in Israel. Set in an army medical center, it became a cult hit, to the extent that every currently serving soldier could quote its dialogue. But aside from its popularity, the show also reawakened one of the most serious affairs to have arisen in Israel over the last few decades — an issue that was swept under the carpet, without anyone responsible paying a price.

The affair, which began in the 1990s, involved the testing of anthrax vaccines — the “Omer-2” project — on a group of around 760 soldiers, over a period of eight years. The trial’s organizers exploited the high motivation and innocence of the soldiers, most of whom were attending courses or were at the start of their military service, and whom they approached to participate in secret experiments.

Crucial information was hidden from the soldiers during the recruitment process; they were forbidden from informing their unit doctor about their participation, and most of them didn’t even tell their parents. All this, along with the exploitation of troops that occurs within a hierarchy, completely undermined the informed consent given by the soldiers. The process was so tainted by defects that it’s doubtful whether the soldiers’ signatures can even be considered as agreement.

After the story was aired on investigative TV show “Uvda” in 2007, Physicians for Human Rights began interviewing soldiers who had participated in the trial. We spoke with around 60 soldiers, several of whom reported side effects such as skin problems, intestinal and digestive issues, migraines and headaches, tiredness and weakness.

A central storyline in “Taagad” involved soldiers taking medicines to test their effectiveness in dealing with a sarin gas attack. The trial in the series was instigated by external elements, and it wasn’t clear whether the army knew what was being tested. A pharmaceutical company seemed to be collaborating with people in the army or the Ministry of Defense, for the benefit of Russian entities. The company recruited a doctor who had agreed to cooperate for financial gain, and exploited combat soldiers, who due to their patriotism didn’t ask questions. The soldiers were prepared to swallow the “stimulants” being given to them without raising an eyebrow, even when some of them started developing a rash, hallucinations, psychotic behavior and vomiting. The resemblance to reality was not accidental.

Who was behind the trial?

As a devout follower of the show, I look forward to seeing whether its creators will dare address the questions that remain unanswered to this day: Why were anthrax experiments conducted on IDF soldiers when not a single one was supposed to be sent to fronts where they risked exposure to biological weapons? Why did the trial not include a diverse civilian population, including children and adults, when the real fear was of an attack on the wider public? And if, as is claimed today, that thanks to this inadequate trial we now have an anthrax vaccine, why is it not documented anywhere? How can we prove that it’s effective for the whole population when it was only tested on the young and healthy?

There are other nagging questions: Did the anthrax trial involve foreign entities that pressed for the trial to take place, as they did on “Taagad”? Did anyone profit from the trial? What was supposedly the role of the Israel Institute for Biological Research (IIBR) and why has it never been investigated? Why did the Supreme Court censor part of the Israel Medical Association’s report, and why did the then-manager of the IIBR choose not to appear before a committee?

One positive outcome of the anthrax affair was the tightening of the army’s criteria for conducting trials on human subjects. But aside from that, no conclusions were drawn and no one was held responsible. One must hope that the popularity of “Taagad” will prompt the public to demand transparency and accountability surrounding the anthrax trial. Otherwise, aside from a show that’s fun to watch at the end of the day, we haven’t achieved a thing. We know that a second season is already in the works. Let’s hope that it pushes the question of responsibility for the anthrax affair back onto the agenda.

Ran Goldstein is the Executive Director of Physicians for Human Rights. This post was originally published in Hebrew on Local Call. Read it here. Translated by Natasha Roth.