The Zionist left doesn’t oppose Zoabi because of her controversial comments or her participation in the Gaza flotilla. It opposes her because she calls for full equality.

Last week Haaretz columnist Ravit Hecht wrote that any true leftist ought to oppose Haneen Zoabi. True, Hecht did concede that the question “is not a legal question but a moral one”; that is, she recognizes Zoabi’s right to continue serving in the Knesset (truly magnanimous of you, Ravit!). However, later on in the piece she falls squarely in line with all the right-wing accusations against Zoabi, from support for terrorism and violence to “zero tolerance for the right of Jews to a national home.” 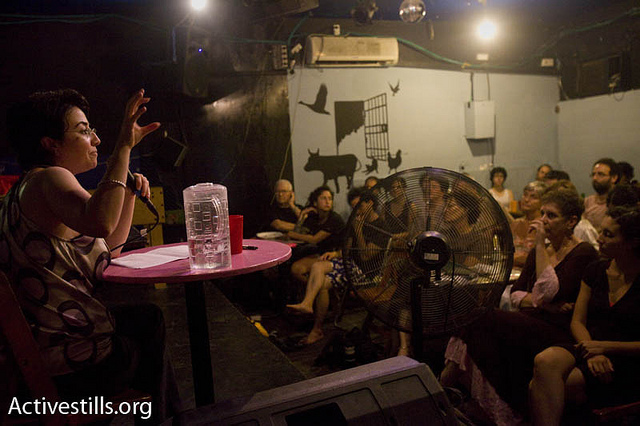 I don’t want to provide a running commentary of Zoabi’s views or explain what she means at any given time. Hebrew-speakers can read her interview with Local Call‘s Lilach Ben-David (or any other comprehensive interview) and judge for themselves. What interests me in Ravit Hecht’s column, and what makes it a symptom of the main problem of the Israeli left, is not the familiar arguments but rather the following paragraph, which lets the cat out of the bag.

When Balad proposes a two-state solution, one being a state for all its citizens and the other an exclusively Palestinian one, a question arises, exceeding political or legal considerations: What kind of dialogue can Zoabi conduct, assuming she wants to, with anyone who wishes to live here in security as a Jew? Why is her response to Israeli policies that discriminate against Israeli Arabs, and which follow apartheid principles on the West Bank, the total denial of rights and aspirations of the other side?

The problem, therefore, is not Zoabi, her participation in the Mavi Marmara or the fact that she insulted a policeman. The root of the problem is Balad’s platform itself, specifically its call for a state of all its citizens, even after the establishment of an independent Palestinian state. This is, of course, an impressively honest confession that renders superfluous any discussion of style. The left is meant to strike off Balad, holus bolus, simply because of its platform. For all practical purposes the left may as well strike off Hadash and other Arab parties that share the same demand, even if they are not as strident about it as Zoabi.

Note the nexus between a “state of all its citizens,” and the security of Israel’s Jews. Bibi could not have put it any better. Hecht makes these demands in the name of “democracy, human rights, a compromise leading to fulfillment of the aspirations of both nations.”

So let’s talk about “democracy and human rights.” What does a state of all its citizens mean within the ’67 borders, as compared to a Jewish state? The answer is simple. It is a country where everyone is truly equal. It is a state that is completely indifferent to the origin of its citizens. This state will maintain Jewish culture, as in all likelihood Jews will be a substantial majority, and will keep its Jewish symbols and Jewish days of rest (with corresponding rights for Palestinians citizens). But the state apparatus will not regard itself as being committed only to the Jewish community. That means no allocation of resources, citizenship laws, benefits and obligations on the basis of ethnicity; in contrast to what is happening today.

As long as the “Jewish state” is one that treats Jews and non-Jews differently, it cannot be considered equitable, at least not in the Western sense. The reason is simple: An Arab cannot become a Jew, so s/he will always remain a second-class citizen in the “Jewish State.” A Turk can become German, a Pakistani can become British and an Israeli can become American. That is the case because these countries are delineated as a “German State” or a “British State.” But if the United States were to become the country belonging to the white race or to Christians, it would no longer be able to fulfill its pledge of equality. What is true for all other countries is true for Israel. Should the Israeli apparatus become equal and neutral, the state would turn into a “state of all its citizens,” regardless of how frightening that expression is. End of story.

The demand for a state of all its citizens alongside a Palestinian state is the only logical leftist approach in the framework of the two-state solution. It means full political and civil rights for all people between the Jordan River and the Mediterranean Sea, either within an independent Palestine or an independent Israel.

The problem is that many on the Israeli left see it the way Hecht does: For them the establishment of a Palestinian state is not a solution to the extreme situation of inequality between the river and the sea. For the left, the solution is a kind of deal made among the Israeli elites, in which the occupied territories are traded off for continual control of the 78 percent of the total area that will remain ours. And the brilliant part of the whole thing is that the price will be paid by someone else – the settlers. It’s your typical liberal Tel Avivian dream: the pieces of the puzzle are falling into place, the bothersome occupation disappears and our right to remain lords of the land is maintained.

It’s no wonder, then, that no one apart from the Zionist left is buying this idea – not the right and certainly not the Palestinians. Hecht’s solution? Blame Zoabi, of course.

This article was first published in Hebrew on Local Call and was translated by Sol Salbe.

Related:
The Israeli media’s hit job on MK Haneen Zoabi
Zoabi: Struggle for democracy is a struggle against Zionism