After a diplomatic disaster following the 2011 Security Council vote on Libya, and with popular opinion in Germany against him, Foreign Minister Guido Westerwelle realized he could not isolate Germany again. 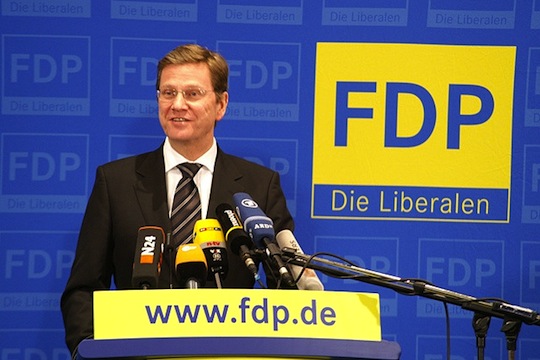 “… and, what a surprise, Germany!” So said Moussa Ibrahim, Muammar Gaddafis spokesman, when he listed the countries that had abstained from the vote for Resolution 1973, which legitimized the 2011 NATO intervention in Libya. Even South Africa voted for the resolution, though it bitterly regretted doing so when it saw how the operation was unfolding. In abstaining, however, Germany broke out of the Western alliance and appeared alongside countries with doubtful democratic reputation, including Russia and China. The responsibility for that disastrous decision belonged to Germany’s Foreign Minister Guido Westerwelle, who made the decision against the outspoken advice of his senior consultants.

Westerwelle was so heavily criticized at home that even his predecessor accused him publicly of working against fundamental German interests. His popularity declined rapidly in the wake of the vote. He lost his post as a chairman of the Liberal Party and was nearly toppled as minister. Only chancellor Angela Merkel held on to her foreign minister.

Popular support for the Palestinian cause is as high in Germany as it is in France. However, all German governments have traditionally been strongly supportive of Israel. Consequently, both Merkel and Westerwelle have declared Israel’s security as a “reason of state” for Germany. Thus, Germany has always voted in accordance with Israel and the United States on decisions concerning Israel in the UN.

Faithful to that tradition, Germany was against the resolution in favor of upgrading Palestine to a non-member observer state. Israel and the United States made an effort to get a visible number of countries to agree to vote against the bid. They concentrated on Central European countries like the Baltics, who had sympathy for the Palestinians, because they had lived under occupation themselves. These countries are small in size and large in number. Because each state (regardless of size and influence) has one vote in the General Assembly, they could easily have constituted a visible counterbalance to the expected outcome passage of the resolution.

However, in the end, too many countries in Europe were fed up with Israel’s stubborn settlement policy. It became clear in the days ahead of the vote that all of the Mediterranean and Scandinavian countries would vote to upgrade the Palestinian status. Confronted with this clear trend, none of the Central and Eastern European states, with the exception of the Czech Republic, wanted to be in open opposition to the Mediterranean and Scandinavian countries. They decided therefore to abstain as a compromise. Germany, in a last-ditch effort, tried to get at least a clear majority of European states to vote for abstention, but it failed in the end.

Isolated in the EU, and with popular opinion in Germany against him, Westerwelle would have risked repeating the failure of the Libya vote had he rejected the resolution. The German opposition, widely in support of the Palestinian bid, would have accused him of again isolating Germany in Europe and voting against vital German interests, especially regarding the long-term goal of a united European foreign policy and permanent membership in the Security Council. In abstaining, Germany was joined by Great Britain and some Central and East European countries. The decision was acceptable to the German public and essential for the foreign minister’s political career.

The vote came as a surprise to many political observers in both Germany and Israel. The public had taken a German rejection of the bid for granted due to the tradition of unconditional support for Israel in the international arena. But Westerwelle had learned from his mistakes in Libya, and would not dare to isolate Germany again.

Anselm Kiersch is a German child and adolescent psychiatrist living in Norway. He is a member of the Norwegian Palestinakomiteen, which is part of the International Solidarity Movement for Palestine.