Jewish Voice for Peace activists are arrested protesting ADL exchange programs that bring together American law enforcement with Israeli military and police, a swapping of ‘worst practices’ that strengthens the repression of communities of color in both places. 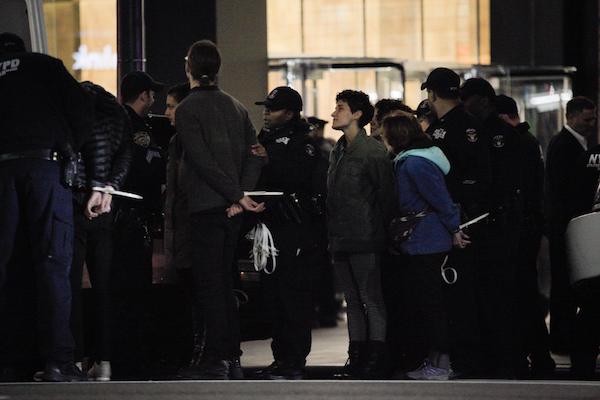 In my professional life, I teach workshops about healthy relationships and consent to middle and high schoolers. There is a point in each workshop when we explain that to abuse someone is a choice. This is a good thing, I tell them, because it also means we can choose to not hurt and control others. Abuse is never predestined, no matter what’s happened in our pasts. Then I tell them something I find incredibly powerful: one of the best parts of being a young adult is that we can decide what past generations have given us that we want to carry forward, and what we want to leave behind.

On November 8th, the anniversary of the election of a man who embodies abuse, I got arrested at the Anti-Defamation League (ADL) offices in New York City. As a white person and as a Jew, I was arrested for asking the ADL to stop running exchange programs between U.S. police and Israeli military. Instead of simply accepting our petition signed by over 20,000 people and listening to the stories we had to share of the harms of their programs, the ADL called in 30 cops to arrest me and six of my fellow organizers.

The ADL runs exchange programs that bring together American law enforcement with Israeli military and police to exchange tactics, strategies, and ideology. In other words, a swapping of ‘worst practices’ that strengthens the repression of communities of color in both places. 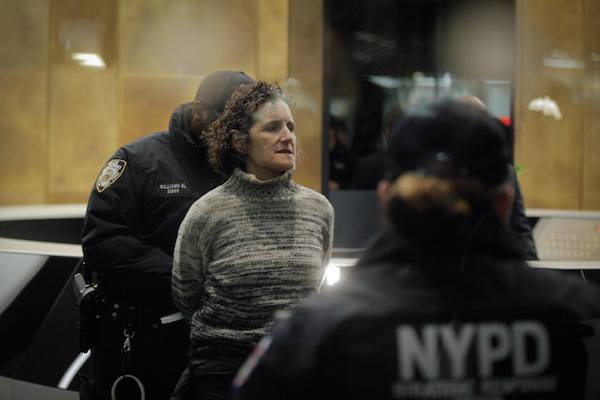 A member of Jewish Voice for Peace is arrested during a protest action at the Anti-Defamation League’s offices in New York, November 9, 2017. (Courtesy of JVP)

Participants in the ADL’s exchange trips visit checkpoints which Israel uses to surveil, control, and humiliate Palestinians entering Israel from the West Bank. Conversely, when then-Israeli Police Chief Yochanan Danino visited New York City in 2013, he toured the NYPD’s “Ring of Steel” surveillance camera network and said, “[t]here is no reason that we can’t be like the NYPD.”

In the lobby of the ADL, right before I was arrested, I read aloud a testimony from Maysanne Murad, a 13-year-old girl from Ramallah who was harassed at a checkpoint on her way to a sleepover with her best friend. As I read her words, I pictured the teenagers that I work with. How could the idea of my safety, or my students’, ever be pitted against hers?

These programs exacerbate brutality in both countries and build a world in which “safety” is something to be provided to some communities at the expense of others. But true safety means safety for all, not just some.

While the ADL claims to fight against hatred and injustice as a civil rights organization, it actively works to weaken the Palestinian struggle for liberation. Through its law enforcement exchange programs, it also strengthens repressive law enforcement practices in the United States that disproportionately harm communities of color. Ending the exchange programs will not end racist state violence. But it would be a step in the direction of a new, safer world.

So as an anti-racist, anti-Zionist, self-loving Jew, I call on the ADL: join me. Choose to leave behind the abusive, racist aspects of our community’s legacy. Unlearn the idea that safety means investing in policing, weapons, and tactics designed to harm people. Listen to the testimonies we read  at our action today and follow the lead of those who have been harmed by this long legacy of violence.

Talia Baurer is a member of Jewish Voice for Peace – New York City.