The photo below was taken by an Israeli Ta’ayush activist on Saturday March 2 at 10:30a.m, in Umm al Amad, a Palestinian village in the South Hebron Hills close to the Otniel settlement. Shepherds from the village were trying to graze their sheep when according to the activist, Border Police officers showed up and simply expelled them. Masked settlers then came around to join in the intimidation and harassment. They were not questioned by the security forces or asked to identify themselves, but rather made nice. 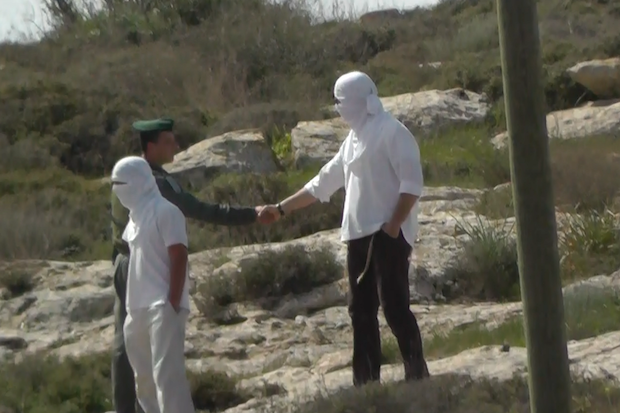 Although the settlers did not attack anyone in this incident, just a week and a half ago, settlers accompanied by IDF soldiers shot two Palestinians in Qusra. And not all of them even bothered covering their faces. 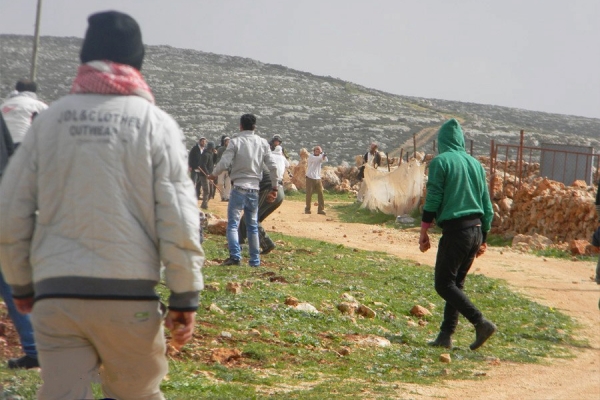 A settler (in white shirt) pointing a gun at Palestinians on the plantations of Qusra, February 23 2013 (photo: Saad Al-Wadi)

The top photograph is a simple, visual manifestation of the fact that Israel’s security establishment is not simply colluding with settler harassment and violence but is leading the way when it comes to violations of Palestinian human rights, and breaking Israel’s own laws.

Why is a Border Police officer shaking hands with a citizen whose face is covered? And more importantly, why is that settler’s face covered in the first place?

A picture is worth a thousands words. In this specific case, the single snapshot captures daily reality in the West Bank. As I have reported many times in the past, Palestinian farmers in the South Hebron Hills are often prevented from grazing their cattle or accessing their water cisterns not only because of settler intimidation, harassment and violence, but also due to IDF collusion and at times active enagement by the IDF and Border Police in preventing Palestinians from accessing their lands and going about their lives.