The arson attack against the bilingual school in Jerusalem was committed within a broader political framework: it is an extension of institutionalized violence and ought to be traced back to incitement by right-wing Israeli politicians preaching for blind patriotism and hatred of the ‘other.’ 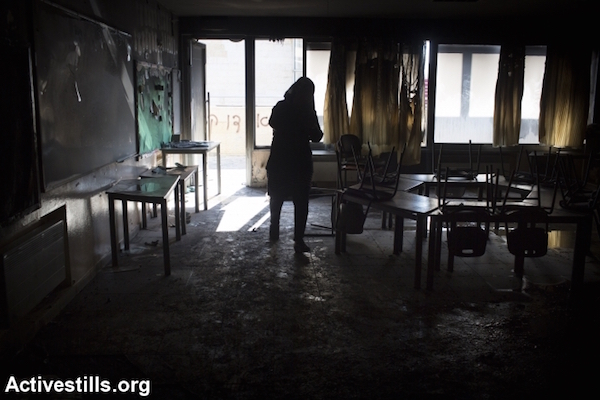 A teacher inspects the damage from an arson attack that targeted first-grade classrooms at a Jewish-Arab school near the Palestinian neighborhood of Beit Safafa in southern Jerusalem, November 30, 2014. Spray painted on the walls were racist slogans in Hebrew reading: “Death to Arabs” and “There’s no coexistence with cancer”. (Photo by Oren Ziv/Activestills.org)

After every act of violence perpetrated by Palestinians against Jews, Israeli politicians waste no time framing it as an act of terror that can be traced back to the incitement of Mahmoud Abbas, the Palestinian Authority, some local Palestinian leadership or Palestinians’ “intrinsically violent” culture. The violence is always part of something broader than the act itself.

The arson of a bilingual school in Jerusalem Saturday night will most likely be framed as the doing of Israeli society’s “bad apples.” Israel’s right-wing political leadership will continue to enjoy impunity for its role in the incitement against the Arab-Palestinian population — and the left wing — that leads to such violent attacks. Organizations like Lehava will never be outlawed for their racist discourse. “Price tag” terrorism will continue to be viewed as “just graffiti.”

The narrative within Israeli society, according to which Jewish violence is foreign and exceptional, will continue to be perpetuated. Meanwhile, that same society will continue to present Palestinian violence as an intrinsic cultural characteristic.

Read also: ‘We will overcome’: Arson and mourning at J’lem bilingual school

This narrative, however, ignores the institutionalized violence committed by the Israeli security agencies. Private violence from the Israeli side is not necessary, however, because they have said agencies to carry it out on their behalf. The thirst for harming the “other” is satisfies by the harm inflicted by these officials bodies.

We can therefore conclude that the scope of violent acts committed by Jews against Palestinians is similar, if not broader, to the scope of those committed by Palestinians. It is only that the violence of the former is looked at as legitimate and untainted; it is the violence of the civilized, fighting against the barbarians. History is reset with every act of Palestinian violence, and Jewish violence is always perceived and broadcast as a mere reaction to it. 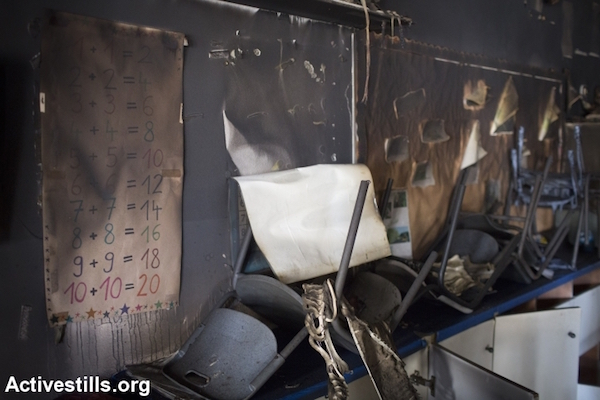 Damage from an arson attack that targeted first-grade classrooms at a Jewish-Arab school near the Palestinian neighborhood of Beit Safafa in southern Jerusalem, November 30, 2014. Spray painted on the walls were racist slogans in Hebrew reading: “Death to Arabs” and “There’s no coexistence with cancer”. (Photo by Oren Ziv/Activestills.org)

It is time we recognize that the arson attack against the bilingual school in Jerusalem was committed within a broader political framework. At the very least, it should be viewed as being inspired by that political framework. This act is an extension of that institutionalized violence and it ought to be traced back to the continuous incitement by right-wing Israeli politicians who preach for blind patriotism, fascism and hatred of anyone who isn’t a Jew who supports their political agenda. It is a privatized violence which signals to the security agencies that their institutionalized violence is insufficient or is not realizing its intended goals. Those goals, despite the common perception, are not strictly security oriented.

I don’t mean to justify any kind of violence committed against anyone. My intention is to refute the accepted narrative — reliant on a colonial mindset — that is so common in the inner-Israeli discourse surrounding the legitimate use of force. That same narrative allows the average Israeli to condemn violent acts — which are becoming more and more common — committed by Israeli individuals in the hopes of preserving their moral superiority over other groups, which are perceived intrinsically and unjustifiably aggressive and violent. That same narrative must begin to calculate the institutionalized violence committed against Palestinians by the Israeli military presence in the occupied territories, and by law enforcement agencies within the Green Line.

Fady Khoury is a Palestinian lawyer in Israel and currently a graduate student at Harvard Law School.

Related:
‘We will overcome’: Arson and mourning at Jerusalem’s bilingual school
How the IDF abdicates its monopoly on violence in the West Bank