When they emerge from the rubble, as they always do, who among Gaza’s Palestinians will look to Abu Mazen as their legitimate leader?

The Fatah chief is reportedly in Cairo today to meet with Egyptian strongman Abdel-Fattah el-Sisi, whose “ceasefire proposal” to end the bloodshed in Gaza was promptly rejected as “a joke” by the Hamas leadership on Tuesday.

Senior Israeli officials and Western diplomats said the reason the Egyptian ceasefire initiative was so short-lived is that it was prepared hastily and was not coordinated with all the relevant parties, particularly Hamas.

Why, then, had Abbas praised the terms of the Egyptian proposal? And what qualifies him to negotiate anything more representative of “the relevant parties”?

To answer that question, I turned to the Palestinian National Charter, from which Abbas – in his capacity as chairman of the Palestine Liberation Organization (PLO) – is supposed to derive whatever representative authority he has left (his term as president of the Palestinian Authority expired in January 2009). 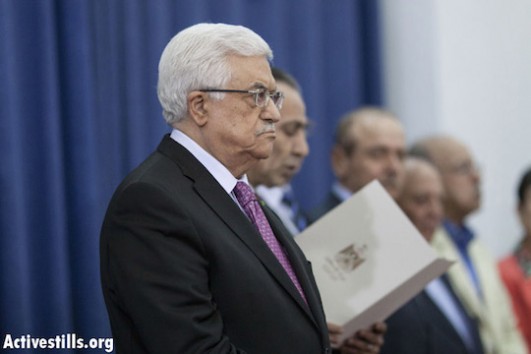 First, a reminder: of the charter’s 33 articles, all but five were nullified or gutted of language deemed objectionable to Israel. Those changes were affirmed by then-PLO Chairman Yasser Arafat in a letter to President Bill Clinton dated January 13, 1998. The letter, which can be found here, noted that the PLO’s main legislative body – the Palestine National Council – had approved the changes in an “extraordinary session” held in, of all places, Gaza.

Among the articles left on the cutting room floor was number 22, which begins:

Zionism is a political movement organically associated with international imperialism and antagonistic to all action for liberation and to progressive movements in the world. It is racist and fanatic in its nature, aggressive, expansionist, and colonial in its aims, and fascist in its methods.

To watch Gaza burn, one wonders whether these words would sound objectionable today. But that’s a matter for pollsters or media mavens. The point is that no such language remains. Instead, what’s left in the amended document is a set of mostly innocuous clauses specifying, for example, that the PLO “shall have a flag, an oath of allegiance, and an anthem.”

But one untouched article, number 30, caught my eye:

The Palestinian people believe in the principles of justice, freedom, sovereignty, self-determination, human dignity, and in the right of all peoples to exercise them.

Had Mahmoud Abbas affirmed that right, clearly and forcefully, on day one of Israel’s Ramadan Massacre, he might have had the ear of its battered survivors. When they emerge among the rubble, as they always do, who among them will look to Abu Mazen as their legitimate leader? Bookmark that question. For now, the killing continues.

Related:
Why there is no room for diplomacy in Gaza
Why isn’t the West Bank rioting, too?