And why it will probably pick another one before too long. 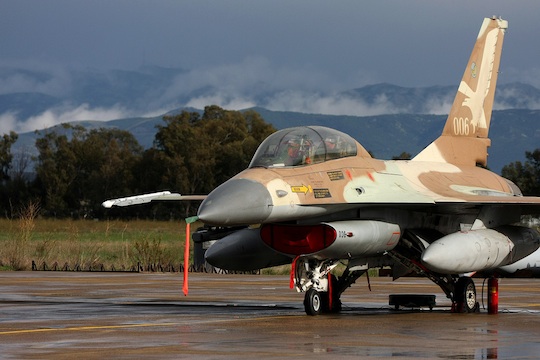 After Hezbollah’s fatal attack on Israeli soldiers Wednesday, the two enemy sides are in a rare configuration: they’re even. Israel killed six Hezbollah guerrillas and an Iranian general on January 18, so Hezbollah killed two Israeli soldiers and wounded seven more, and now they’re quits, for the time being. They each told UN peacekeepers in south Lebanon that they didn’t want to escalate things anymore, they wanted calm, and that clearly seems to be the case today.

What an opportunity. From this point forward, Israel and Hezbollah could start fresh, they could each decide not to attack the other, and, in theory, this unofficial cease-fire could last indefinitely.

I believe Hezbollah would go for that, for one simple reason – they know Israel is the incomparably stronger side (which is why they absorbed so many Israeli attacks in the last couple of years with very little response, until Wednesday). They know that starting up with Israel would get them bashed up badly. I think Hezbollah’s ally Iran would go for an indefinite, unofficial cease-fire too – for the same reason – and so would their ally Syria.

Unfortunately, I don’t think Israel would accept that arrangement. The strong in this world get away with things the weak wouldn’t dream of trying, and Israel flies spy jets and drones over Lebanon regularly, it blows up sophisticated weapons on their way from Syria to Hezbollah, and it assassinates Hezbollah and Syrian military officers as well as Iranian nuclear scientists and generals.

Would Israel be willing to give up all those prerogatives in return for Hezbollah unofficially putting down its weapons? I don’t think so, because Israel is filled with too much fear and aggression to trust its deterrent power; instead, it trusts the use of force.

And lately Israel has been zooming in on a whole new Hezbollah “threat” it must “defend against”: the organization’s recent military build-up on the Syrian Golan Heights, across the border from Israel.

After the Hezbollah attack, Prime Minister Netanyahu said: “For a while, Iran has been trying, through the Hezbollah, to form an additional terror front against us from the Golan Heights. We are acting with resolve and responsibility against this effort.”

This is Israeli paranoia at work. Hezbollah isn’t gunning for Israel from the Syrian Golan Heights, it’s defending the territory – and its own survival as well as that of Syrian President Bashar Assad’s regime – from ISIS and the Nusra Front, the latter an Al-Qaeda offshoot.

Even superhawk columnist Guy Bechor made this point in his Yedioth Ahronoth column on Thursday:

This is the last territory still in the hands of the Syrian regime, and this is where Hezbollah has set up a command post and concentrated its forces. What are they doing there? They’ve decided to defend the area at all costs, because if Nusra Front gets across it, they’ll be able to continue north to the Shi’ite and Hezbollah strongholds in the Lebanese valley, turn west toward the Shi’ite areas in south Lebanon, or turn east toward Damascus. …

The sectarian war is more important to these terrorist groups than Israel, and from the standpoint of both the Sunnis [ISIS and Nusra Front] and the Shi’ites [Hezbollah], we are the less threatening enemy.

Yedioth’s center-left star columnist Nahum Barnea made a similar point about Israel’s knee-jerk alarm over Hezbollah’s new deployment. He wrote that Netanyahu’s message that Hezbollah was spreading out across the Syrian side of the border with Israel, and that Israel would carry out all military actions necessary to prevent this, was “adopted immediately by every politician and analyst,” Barnea wrote. He continued:

Let’s assume Hezbollah intends to do this. Is it so terrible? Is it preferable for Israel to sit on the Golan Heights across from the forces of ISIS and Nusra Front? After all, we’re sitting across from them today, from Quneitra [on the Israeli-Syrian border] south, and I haven’t heard that Israel has launched a war against them. Why are we able to go on living across from Hezbollah in Hanita, Metulla, Misgav-Am, Dovev, Kiryat Shmona and Shlomi [near the Lebanese border], but we can’t live across from Hezbollah  in Merom Hagolan [near the Syrian border]?

It’s always about us, we’re always the target, goes the Israeli view, which is why we can’t leave Hezbollah alone even when it’s preoccupied with fighting global jihadists. And out of this same paranoia grows another misperception that causes us to pick fights: the view that the enemy’s weapons are always offensive, meant for attacking us, and never defensive, meant for deterrence or counterattack.

Ari Shavit, star center-left columnist of Haaretz, inadvertently provided a window into this way of thinking in his piece on Thursday.

It’s meant to be a pretty dovish column. He writes, “We must not provoke, we must not act recklessly in a way that could lead to an uncontrollable deterioration. We must not take war-generating steps that could force a dangerous war on Israel.” But at the same time, he sees Hezbollah as being ideologically and perpetually bent on war with Israel:

While many Israelis may harbor understandable guilt over the national Palestinian movement, this is not the case when it comes to the sub-state Shi’ite army in Lebanon. There’s no room for comparison between our peace-seeking democracy and their terrorist totalitarianism. There’s no similarity between our desire to live in peace and their desire to enforce their religious faith by the sword. If we’re forced to go to war against Hezbollah, it will be a war of the sons of light against the sons of darkness, a free society against a fanatical order that threatens freedom.

And because of what he sees as Hezbollah’s scorpion-like nature, Shavit’s conclusion is that “sooner or later a third Lebanon war will break out.” At the same time, though, he says it is “our duty to make every effort to put off the war’s outbreak.”

But the fatal contradiction here is this: If you believe that Hezbollah’s practical goal is to destroy or enslave Israel – an unlikely one considering the imbalance in power between the two sides, which Israel continually demonstrates – then will you forgo the opportunity to bomb the convoys bringing them advanced weapons? Will you pass up a chance to assassinate their key people? Will you stop invading Lebanese airspace to spy on them?

No, you won’t. It wouldn’t make sense. If you believe Hezbollah is working toward conquering or destroying you – that this is not merely their wish, but their concrete goal – it would be suicidal to let them go about their business. So you attack. And by attacking, you violate your principle that “we must not provoke … we must not take war-generating steps that could force a dangerous war on Israel.”

Whatever Israel may say about not wanting to provoke another war with Hezbollah, its superior military strength combined with its bottomless fear will likely lead it, sooner or later, to do just that.