Israeli leaders used to say that democracy in the Arab world is the key to peace and prosperity in the region. So why are they so unhappy with the current demonstrations? 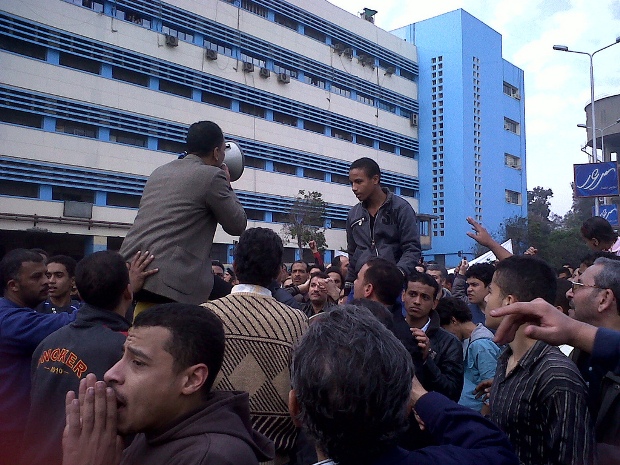 Four months ago, deputy-Foreign Minister Ayalon ,who often serves as media front for Foreign Minister Lieberman, addressed the high-level audience of ministers, speakers of parliaments and politicians from across the globe about the lack of democracy in the Middle East”, according to the Israeli embassy to the US. Ayalon apparently said (highlights are mine):

“If the Middle East was more democratic, then there would be no conflict, as history has proven that, in general, democracies don’t fight each other or send terrorist proxies. Our conflict is not over territory or resources but over basic ideology, Israel is not accepted in the region because it is democratic. […] I am embarrassed to be the only speaker from a democracy in our region.” .

Given Israel’s complaints over the lack of democracy in the Middle East, one would expect it to be encouraged by the winds of change blowing from Algeria, Tunisia, Yemen, Egypt, and possibly Jordan, Syria, Lebanon, and Sudan. But this is not the case. Although Netanyahu specifically ordered his ministers not to comment on the Egyptian issue, at least one of his cabinet members did. “We believe that Egypt is going to overcome the current wave of demonstrations”, s/he told TIME Magazine. The minister added: “I’m not sure the time is right for the Arab region to go through the democratic process”, suggesting that instead of an open and free elections, what the Egyptians really need is “a process” that should “take generations”; and concluded with wishful thinking: “We do believe the regime is strong enough to overcome it”.

This statement is in line with the general atmosphere in the Hebrew media this morning. Israel’s main stories express concerns voiced by senior military brass, fearing of any change in the status quo. “We must ask ourselves what is the worst-case scenario” said Ya’acov Amidror, former head of the Israel Defense Forces’ Research and Assessment Directorate. And these concerns from a democratic Egypt are not limited to circles of army generals. “I was interested today to see reaction from pro-Israel groups in the United States — which were favorably disposed to the democratic aspirations of the Green movement in Iran in 2009 — to the Egyptian pro-democracy protests” – noted Salon.com’s Justin Elliott. He quotes Alan Elsner, senior director of communications at the Israel Project, an influential D.C.-based pro-Israel group, saying: “There is a huge difference between the governments of Iran and of Egypt. The government of Egypt has a peace treaty with Israel and has observed it, [and Iran is antagonistic to it]”.

This is, in a nut shell, the reason for Israeli support vis-a-vis concern of a possible democratic revolution in other countries, such as Iran or Egypt. What comes first is the government’s own interest, not any kind of support for universal democracy and human rights. And as far as the Israeli mainstream is concerned, (a) a “friendly” suppressive dictator, ruling 80 million people for decades, is not necessarily worse than a neighboring democracy; and so (b) the support for the green-movement in Iran wasn’t due to its democratic values, as many claimed at the time to western media over and over again, but rather because they wished for a different regime in Iran with a different foreign policy.

Two things should be said about this revealing moment.

First, there is no guarantee, neither in Iran nor in Egypt, for the convenient policy Israel wishes for. For example, what would have happened if the green-movement would have culminated in a democratic revolution last year, but a democratically elected Iranian government would have continued to support a confrontational policy with regard to Israel, as indeed happened in Turkey, Lebanon, and with the Palestinians’ election of Hamas?

Second, while it is understandable that they hope for policies more convenient to their interests, it is less acceptable that they cynically abuse democratic rhetoric for this purpose. Now we know what some have suspected: When Israeli officials and supporters emphasize Israel’s democratic aspects, it is not because they truly unconditionally stand behind their universality, but rather to tactically raise sympathy among western publics, for their own needs. In particular, they are abusing the empathy for democratic values to promote and defend their military rule in the West Bank, and the ethnic and emergency laws and practices in Israel-proper. As we can see at least in the case of Egypt, they rather compromise their support of (other people’s) freedom and democracy, for their own interests, and this episode may cost them (whatever is left of) their integrity and reliability in the West.

Moreover, if we believe Netanyahu’s statements and follow his logic, more democracy should actually bring peace and security to the region. Only last year he asserted to British and American media that “democracies don’t fight each other”, (relying on liberal political scholars, who see this as self-evident truism). So, if this is indeed his belief, and it’s not the fear of war and security issues, then why are Israelis so worried of a democratic Egypt? A possible if unintentional outcome may be that Israel will lose its legitimizing argument, and its self-proclaimed monopoly of being the democratic beacon of the region; what’s more, Israelis they face fresh regional competition they may seem less democratic. If indeed things will turn this way, it would be a very interesting change in Middle East politics to see, that – as Arab countries become more democratic, Israel is and will be getting less so.

Eyal Clyne is an independent Israeli blogger-researcher (among other things, and not as a source for income). His Hebrew blog is named after Ahad Ha’am’s inspiring essay “Truth from Eretz Israel”, and focuses on the conflict and other Israeli-political issues.