For Israelis, Jerusalem is an archaeological treasure. For Palestinians, it is a city whose heritage and identity are constantly under threat. 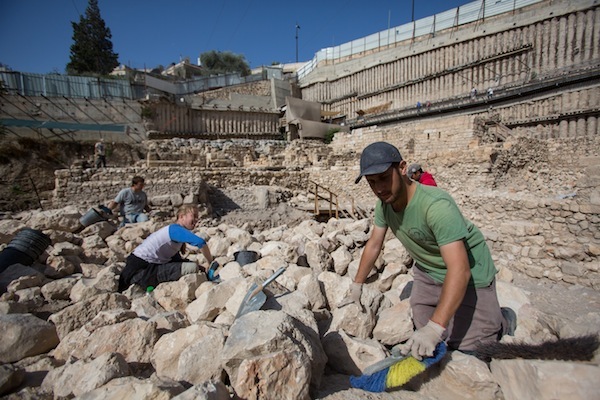 Archaeologists digging at a digging site of the remains of a citadel used by the Greeks more then 2,000 years ago to control the Temple Mount at the City of David near Jerusalem Old City on November 3, 2015, According to the Israeli Antiquities Authority the site was found under a parking lot a few years ago also know as Givati Parking Lot. (photo: Yonatan Sindel/Flash90)

It turns out that issues of identity, religion and recognition are far more critical to East Jerusalem Palestinians than what the Israeli Right and center would have us believe. A new survey shows that East Jerusalemites are more concerned with Jewish pilgrimage to the Temple Mount/Haram al-Sharif and archaeological excavations than issues such as lack of infrastructure and the denial of construction permits.

The survey, commissioned by Israeli NGO Emek Shaveh, an organization of archaeologists and community activists focusing on the role of archaeology in the Israeli-Palestinian conflict, asked East Jerusalem residents what issue concerns them the most in heir home city.

The survey was carried out by the Smith Institute, and included 500 individuals representing Israel’s adult population (Jews and Muslims, ages 18 and older).

According to the findings, 67 percent chose Jewish pilgrimage to the Temple Mount, while 44 percent responded that archaeological excavations concern them most. Forty-one percent of respondents say the denial of construction permits is most important to them, while 30 percent believe the lack of infrastructure is of top priority.

Contrary to the view that providing a higher standard of living and better housing for East Jerusalem’s residents will resolve the tensions in the city — a position that both rightists and centrists seek to advance — the results of the survey suggest the threat to Palestinian identity and the violation of Jerusalem’s symbolic status are of greater concern.

The survey further shows that Israeli Jews and Palestinians in Jerusalem hold completely different attitudes toward the city’s archaeology. The participants were asked their opinion about the purpose of archaeological excavations in the Old City, to which they were able to choose from up to two responses. Eighty percent of Israeli Jews believe that the objectives of archaeological excavations in the Old City and the East Jerusalem neighborhood of Silwan are purely scientific — that is, to find historical evidence of life in the city throughout history.

Among East Jerusalem Palestinians, on the other hand, the most notable responses were to strengthen the Jewish hold on Jerusalem (53 percent), and to erase all remnants of Muslim history from the city (57 percent). Another 21 percent believe that the purpose of the excavations is to erase all of the city’s non-Jewish historical remnants. Only 14 percent are of the opinion that the objectives of the excavations are scientific. In other words, while most Israelis view archaeological excavations as a non-political scientific activity, the other side views them as a clear threat to the city’s heritage and identity.

How does one explain the fact that Israelis and Palestinians hold completely different attitudes toward the same phenomena? Once again we are confronted with the fact that identity, national belonging, and how each side views the past are central to the Israeli-Palestinian conflict. Take, for example, the archaeological activity in Silwan and excavations below the Muslim Quarter. Neither ostensibly affect their quality of life, yet Palestinians view these excavations as a greater threat than lack of investment in services and infrastructure. Despite the poverty, the conflict with Israeli settlers and the chronic lack of basic infrastructure – the primary problem for East Jerusalem Palestinians is the perceived threat to Al-Aqsa Mosque and their historical right to Jerusalem.

The Israeli position does not give due credit to these concerns, and the reason is clear: Israelis are the sovereign, and thus remain unthreatened by the archaeological authorities’ activities, whom they deem to be in line with their own national identity and collective priorities. On the other hand Palestinian residents of East Jerusalem experience the archaeological activities in their neighborhoods as both an extension of the occupation, as well as a sophisticated method of undermining their national and religious identity.

The author is an archaeologist and director of Emek Shaveh. This article was first published in Hebrew on Haokets. Read it here.