The politicians in Israel’s government want nothing more than for Palestinians to simply give up on statehood. They’re not so clear on what happens next. 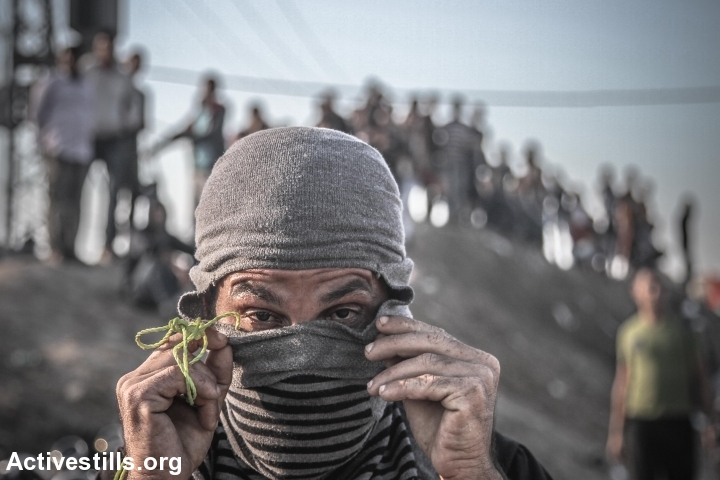 A Palestinian man adjusts his mask during a protest near the Gaza Strip’s border with Israel, October 30, 2015. (photo: Ezz Zanoun/Activesills.org)

The man in charge of educating the next generation of Israelis believes that the driving force behind terrorism is hope.

Yes. You read that correctly.

“Terrorism is not a result of the Palestinians losing hope but rather because they have hope,” Bennett said earlier this week. “A Palestinian state is their hope … If we stop their hope, the motivation for terrorism will drop.” (Hebrew)

The idea is composed half of logic and half of delusion.

The logical side, that some terrorism is driven by hope, is grounded in the academic study of terrorism. Terrorism is, after all, a tactic — a tactic designed to alter the behavior of a government or society to advance a desired political or social change. In this case, Palestinian terrorism — like less abhorrent types of resistance — is rooted in national hopes and aspirations, which depending on the ideology at hand, can range from ending the occupation and establishing an independent Palestinian state in the West Bank and Gaza, to ridding all of historic Palestine of its Jewish presence.

Every national liberation movement in the history of mankind has used violence to advance its goals. The father of Israeli right-wing ideology, Ze’ev Jabotisnky, understood as much. “Every native population in the world resists colonists as long as it has the slightest hope of being able to rid itself of the danger of being colonized,” he wrote in his famous essay “The Iron Wall.”

“That is what the Arabs in Palestine are doing, and what they will persist in doing as long as there remains a solitary spark of hope that they will be able to prevent the transformation of ‘Palestine’ into the ‘Land of Israel’,” Jabotinsky wrote, imploring an idea nearly identical to that being propagated by Bennett over 90 years later.

The delusion is the idea that statehood is the end-goal of Palestinian resistance. Bennett’s worldview does not consider that statehood is a vehicle for redressing the fundamental human and political grievances of Palestinian individuals and society: the denial of basic civil and human rights; that Palestinians, deprived of any legitimate power, are unable to provide security for themselves and their property; having no say in choosing the leaders whose decisions affect every aspect of one’s life; and one of the most tragically protracted refugee problems in modern history.

If Bennett and the Israeli government do succeed in destroying all hope for a Palestinian state alongside Israel Palestinians will not suddenly call off their resistance against Israel, its occupation and the discrimination inherent in a Jewish state. If, indeed, all hope for statehood disappears, Palestinians will seek another vehicle through which to realize their rights and needs.

And that is where the real delusion lies.

If the Israeli Right’s annexationist ideology succeeds at sabotaging Palestinian ambitions for an independent state, will Israeli right wingers suddenly be willing to guarantee equal rights for all those living in this land? Will those who speak of equality and progressive values continue to insist on Jewish hegemonic control of politics, security, land ownership and the economy?

That delusion has spread recently, especially within the Israeli government. It manifests itself primarily through the belief that Israel can legitimately continue to determine the fate of the Palestinians without their consent.